Intended from the start to be a display of imperial Russia’s growing global status, its no wonder St Petersberg is one of the most beautiful cities in the world. The City of the Tsars is packed with rich history, cultural traditions and lavish architecture. Having recently returned from Russia after travelling on our 6 day Vodka Shot tour, travel writer and photographer Ngaire Ackerley tells us about her short but sweet 48 hours in St Petersberg. 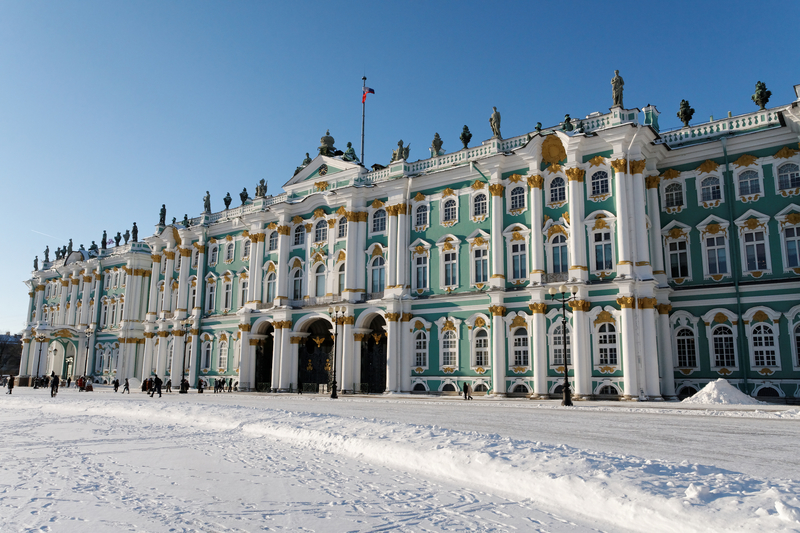 Easing into the city of Saint Petersburg you start to notice the colour of the buildings change. Gone are the grey/brown Soviet tall rigid structures, replaced with yellow, orange, red and green buildings. Our tour guide, Natalia, says the colours are to brighten the city since they only get 30 days of sunshine a year (we used up 3 of those while we were there).

We’re on a car tour around the city, being shown Cathedrals of all colours and types, statues of the Bronze Horseman and Pushkin, and the incredible sight of the Church of the Savoir on Spilled Blood (something I’d had my heart set on seeing for a long time). Dressed up like a gingerbread house, this incredible church has countless details in intricate mosaics all over the outside and inside. Russian pie is on the menu for lunch, it’s cheap for those of us on budgets and incredibly filling and tasty!

Having been to Paris’s Louvre, the Cairo Egyptian Museum and the British Museum I thought I’d seen the best there was. The Hermitage changed all that. It has an incredible collection of art including da Vinci and Rembrandt, but what astounded me the most was the detail in the rooms, from the floor, to the walls and the incredible ceilings. Every room was decorated differently with incredible detail. It is difficult to say which is the best museum, but the Hermitage is high up on the list.

With the feet calling for rest and stomaches rumbling, dinner was in order. What better to eat than a Russian Beef Stroganoff? For someone who isn’t a fan of mushrooms, even this was tasty! Resting up after a full-on day the hotel in St. Petersburg was pretty reasonable. I’m used to roughing it in hostels, so this was a nice change. 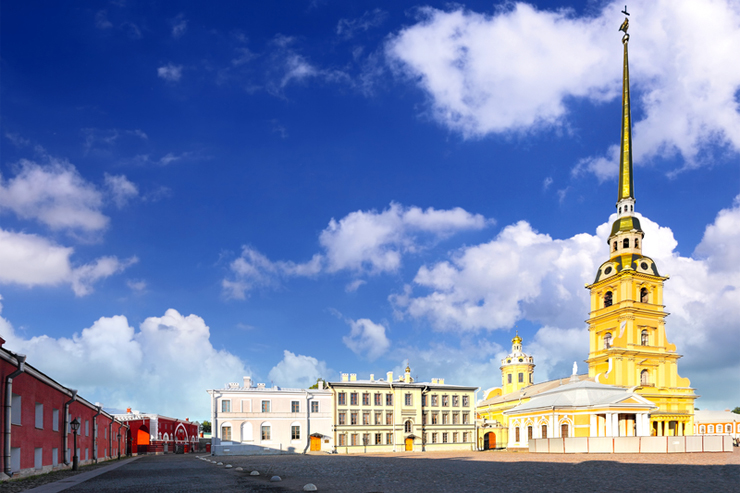 After a spot of breakfast (interesting array of salad leftovers, pancakes, rice and meat) the Peter and Paul Fortress was on the cards. Being the birthplace of the city of Saint Petersburg, no trip would be the same without this visit. An incredibly tall golden Cathedral takes the limelight here, towering over the fortress with many of the Russian rulers since Peter the Great buried within.

As the rest of the tour group ventures on to the Catherine Palace, now was the ‘free time’ part of the tour. This tour is great if you’re someone that enjoys both being with people and also wandering around a city without always being tied to a group. My roommate and I had picked out the top sights we wanted to return to from the car tour the previous day and set out from the Bronze Horseman along the Neva River, stopping over at the Winter Palace to see military bands practicing music (it’s awesome when you stumble across things like that).

The Church of Spilled Blood

With music in our ears we continued on through the city to visit the inside of the Church of the Savior on Spilled Blood. With an audio guide in hand and eye moving everywhere, we were not disappointed. This church is the most highly decorated one I’ve been inside. It has mosaics everywhere, even up high in the domes. This is an absolute ‘must see’ for Saint Petersburg.

Saint Petersburg is a lovely city to wander and despite knowing zero Russian it was a city to feel perfectly at ease in. We found an incredible boutique food shop, markets and plenty of Russian Dolls, ending the day people watching and visiting the Russian Orthodox, Kazan Cathedral before preparing for the night train to Moscow.

Written by: Ngaire Ackerley, travel writer and photographer from New Zealand, currently living in London and travelling the world with her camera in hand. Ngaire’s work can be found on http://designack.com and http://kiwifootprints.com.