Hide out in the Forbidden City, climb the Great Wall, bike ride along Xi’an’s medieval wall and encounter Emperor Qin’s Terracotta Army - this 6 day tour is the perfect introduction to the charms of China!

Saturday. Huan ying, welcome to China and the start of your holiday! Airport arrival transfer from Beijing Capital Airport to your hotel for check-in. The remainder of the day offers free time for you to independently explore this astonishing city.
Overnight: Beijing

This morning, we explore the heart of Beijing, China's pulsating capital, including the vast Tiananmen Square where Chairman Mao’s tomb lies and various monuments to the people are located. Dominating the city center is the Forbidden City, a center of power for five centuries and seat of the emperors. Entering through the Gate of Heavenly Peace (replete with Chairman Mao’s portrait), we enjoy a guided tour of this old city within a city. Later we take an exciting rickshaw ride through the Hutongs of Beijing, weaving through old back lanes, traditional courtyards and compact houses, gaining a fascinating snapshot of the city’s traditional way of life. This evening, we enjoy an eye boggling Chinese acrobatic performance. Swinging ropes, juggling hoops, spinning plates and human pyramids are just a few tricks these show stoppers pull out followed by a Welcome Dinner of Peking Duck at a city restaurant.
Overnight: Beijing  |  Breakfast, Dinner

After a free morning to further explore the city, we drive beyond Beijing to Badaling, to walk a section of the famous Great Wall. Built in the Ming Dynasty, a 6m wide pathway makes a formidable defense, following the highest contours of a steep range of hills. This evening we spend the night at our quaint hotel near Juyongguan Pass, which offers views of the Great Wall.
Overnight: Juyongguan Pass  |  Breakfast

Morning at the Great Wall

Beijing - Xi’an. We rise early this morning and head (5 min bus drive) to the Great Wall at Juyongguan Pass when it opens to beat the crowds. We have time to enjoy and explore the wall before visiting a Jade Carving Centre to learn about this ornamental rock and its importance in Chinese culture. After lunch we head back to Beijing. Free time is offered in the cavernous Pearl Market - an Aladdin's Cave of souvenirs, handbags and gadgets in Beijing, before travelling by express soft sleeper train to Xi’an in Shaanxi Province.
Overnight: Sleeper Train  |  Breakfast, Lunch

We pull in to Xi'an. This morning we discover the Terracotta Warrior archaeological site, where 7000 warriors stand battle ready and have done so for the past 2200 years. Later on we visit a clay workshop specializing in making replica figurines, followed by the Muslim Quarter. Tonight, we welcome you to join the optional Tang Dynasty Show, which includes dinner, a traditional performance and transfers (book/pay locally).
Overnight: Xi'an  |  Breakfast, Lunch

Thursday. Today we take a casual bicycle ride on top of the nine mile Xi’an City Wall (no need to go the entire way around) perimeter peeking down upon the lively city beneath us. We the visit the Big Wild Goose Pagoda. You’ll be transferred to the airport for your onward flight. Please ensure your flight is booked to depart Xi’an after 6pm.

If you require pre or post tour accommodation, or to return to Beijing for your onward travel arrangements (by train or flight) please see "Extra Prices" on the "Prices & Dates" tab for further details.
Breakfast, Lunch 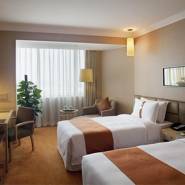 The Beijing Holiday Inn Temple of Heaven is an elegant and comfortable hotel with well-furnished and spacious rooms. Practical in design, the guestrooms feature internet access and the hotel also boasts a range of restaurants and bars, as well as an indoor swimming pool. Located just a 10 minute walk from the Temple of Heaven, the hotel is the perfect base from which to explore this fascinating city. 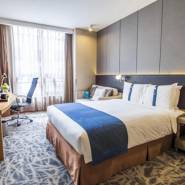 Located just a stones throw from the Beitucheng Subway station, with access to Line 10 & Line 8, the Holiday Inn Express Beijing Minzuyuan is a perfect base to explore the many amazing highlights of Beijing. Within walking distance of the hotel you'll find the famous Birds Nest Olympic Stadium. The hotel boasts a stylish restaurant offering breakfast, lunch and dinner. 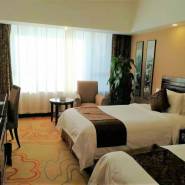 Located a stone’s throw away from the Ancient City Wall and Islamic Mosque, is the Grand Dynasty Culture Hotel. The hotel offers modern comforts in the heart of the city. Each air-conditioned guestroom features WiFi, a minibar and satellite TV. There is an onsite restaurant which serves a daily buffet or a la carte breakfast as well as a variety of Asian and Western dishes. During free time, guests can enjoy a relaxing massage or work out in the fitness centre.

Travellers have rated this tour as 4.75 out of 5 based on 8 recent reviews

We loved every minute and especially our guide Matthew, he made our trip so much fun, interesting and he was so helpful.”

What an amazing jam packed tour of China. From tasting some local food, visiting the Terracotta Warriors, and walking the Great Wall twice this tour is suitable for everyone. A well paced tour with 2 expert local guides we were in good hands during the tour. Lisa organised everything perfectly in Beijing, from being collected by the bus at every point, and organising the group at Beijing Train Station, her level of professionalism was first class. As we left the tour group in Xian, we would like to thank the local guide Andrew, who surprisingly arrived to meet us at 3am to travel with us to Xian Airport and assist with us checking in for our flights to Vietnam. Great work.”

The tour was very well organized and packed in s lot in a short time. Absolutely brilliant! Phung was so calm, knowledgable and always aware of everyone's individual needs. A better guide you could not ask for. We also enjoyed Benny's passion and humor in Xi'an.”

Had a great time, I filled out one of these on paper too, but 10/10 would recommmened. ”

Stephanie was absolutely fantastic ensuring everyone was catered for. Going above and beyond to ensure things ran smoothly . She was friendly , helpful and great fun. ”

Thanks to our guide Feng who did a lot of behind the scenes organizing and made it look easy. A very enjoyable and safe experience.”

Mandy was so amazing. I have never seen a guide so hard-working. She always made sure every guest was completely happy and went above and beyond to make our tour fantastic! Benny was also an amazing local guide and we enjoyed our time with him very much. Great at his job. Our driver in Beijing was also very good! ”

Mandy was so amazing. I have never seen a guide so hardworking. She always made sure every guest completely happy and went above and beyond to make our tour fantastic! Benny was also an amazing local guide and we enjoyed our time with him very much. ”

Tipping is not a natural part of many Western cultures and many of us feel uncomfortable, or unsure, about when, or how much, to tip. However, in China, tipping makes up a significant part of many people's wages so it's important that we get it right. For this reason we've developed a very simple system to take all the hassle out of tipping. With our 'tipping made easy' policy, a nominal pre-determined amount is collected from all group tour participants to cover tips en route. This then saves you the hassle of when and how much to tip bellhops, luggage handlers, local guides and other support staff through the tour. Our 'tipping made easy' doesn't include a tip to your group tour leader. Naturally, though, the amount is up to you as tipping is an entirely personal gesture.

Our fun and informative group tours are perfect for first-time visitors with the services of qualified English-speaking local guides, plenty of sightseeing covering China's main highlights and enough free time for you to explore too.

With the Great Wall topping most travelers' wish lists in China, closely followed by the Terracotta Warriors in Xi'an, we've ensured that all our China group tours include these two incredible sites.

Our trips typically have between 15 and 20 travelers and are escorted by a local Chinese guide who will organize day-to-day activities, ensure smooth hotel check-ins and with their expert local knowledge, provide tips on where to shop or eat. We also use specialist local guides at key sights of interest to maximise your experience.

Accommodation is in comfortable 3-4 star well-managed, centrally located hotels and we include arrival and departure transfers, all transportation, guided sightseeing and a number of your meals. When kicking off our travels in Beijing or Shanghai we start with a group meal, affording you the chance to meet your travelling companions over a Peking Duck dinner or traditional Chinese feast before the adventure really begins!