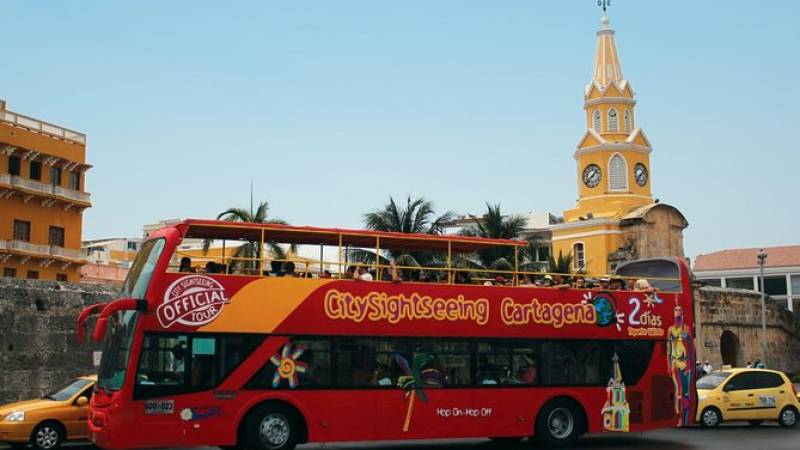 from USD $16.50
When your cruise is in port, explore Cartagena on a 1 or 2 day hop-on hop-off bus tour. This bus pass enables you to tour the Colombian port city at your own pace, hopping on and off as you please within the given time period. Discover all of Cartagena's best landmarks, including Torre del Reloj, Castillo de San Felipe, Museo de Rafael Nunez, Muelle La Bodeguita, and much more! From the open-top deck, enjoy beautiful 360 degree views, whilst marvelling at the fantastic architecture. Be sure to listen to the on-board audio tour commentary to get a real sense of the history behind what you're seeing. Hop off the double-decker bus to get an authentic taste of the local culture, and take part in the included walking tour, for a brilliant guided stroll. You'll also get free entry to the Museo de la Esmeralda, another great perk of this Colombian sightseeing adventure!

BOOK WITH CONFIDENCE: As members of ABTA and ATAS we are 100% financially bonded. You can book your day trip with us in absolute confidence, no matter where in the world you are.

You may start this tour at any of the stops listed.

You may disembark at any of the available stops.

A paper voucher is required for this attraction/activity. You must print and bring your printed voucher with you on the day of the activity, as required by our local provider.

Scoring an average traveller rating of 3.83 out of 5 based on the last 12 recent reviews

“
We have used Hop On Hop off all over the world. Great way to start your vacation and see the highlights of the city. Always clean and the narrative is available in many languages. Awesome tours!”
Gordon W • Submitted 08 Oct 2018

“
Our Hop On Hop Off Tour, purchased from VIATOR, service is offered by City Sightseeing. We were picke up right at the port, and departure was one hour after ship docks. This created a problem of all the buses getting to points of interest at the same time, instead of easier flow. Buses were full and transferred us to the double deckers to start the excursion. The route is 90 minute with 15 stops. The first stop is at the Old City entrance. There are no vehicles allowed in the Walled City. They offer a Guided Walking Tour. Emanuel was our guide and he did a terrific job. Prerecorded narrative and headphones are distributed for use while walking and on the bus. He would add his commentaries and made sure, we were doing OK with the hot weather, stopping on our way to cool off, sip a cold drink and enjoy some air conditioned. We were a big group. I was surprised that it was not split into two groups. We didnt lose anybody, luckily. The double deck buses were clean and in good condition. They ran on time, as announced. The only problem I found, was a narrator on the bus, talking at the same time as the recording. Mostly repeating the stops information. This is already mentioned by the narrator, which would be on passengers preferred language. It was annoying to miss the recorded explanation that were part of the tour. Stops are clearly marked on the map, and the printed information is both in English and also in Spanish. The Hop On Hop Off Cartagena City Sightseeing is a great way to get acquainted with the city. We saw the Clock Tower, Coches Carriage Square, The Cathedral, Bolivar Square, Inquisition Palace, Emerald Museum, visited the Gold Museum, Santo Domingo Square, San Pedro Square, visited Parque Simon Bolivar, and Customs Square, Las Bovedas, among other attractions. The staff is young, very friendly and helpful. There seems to be a lot of them. We recommend this tour and would take it again.”
Jean Luc S • Submitted 09 Apr 2018

“
Great inexpensive way to see the whole city. The bus picked us up right at the cruise ship. We were given earphones to hear descriptions in English along the way. We got off at the entrance to the old city. A guided tour of the old city was included in the price.”
Carol P • Submitted 29 Mar 2018

“
Excellent value tour in Cartagena. The bus was waiting just at the end of the ships gangplank and the tour was everything as promised.”
anncomac • Submitted 04 Mar 2018

“
Guest services-Viator I purchased a hop on off tour in caregena Columbia which stated a pickup at the cruise pier. I would say there were approximately 20 of us who purchased directly while remainder purchased thru holland America for non specific times. It was first come first serve We were denied boarding. Eventually they put us on a separate bus that did not leave for an hour and took us only to first stop and had to get off. There, we had to wait for the regular bus. With very little time in the port, a 90 minute delay was disgraceful. I imagine the Holland America tour company informed Hop on/off not to admit us and are under the impression you do not do pickups at the pier, but my ticket said you do. You need to straighten this out with them and I would like a response back from you. The tour itself was well done and recommended. Thank you, Judy”
Judy D • Submitted 27 Mar 2018

“
Was easy to get to from The Old city. You need to be ready to get off. Sometimes they don't seem to announce the stops. The brochure at times seems confusing as to what the stops are. I did the whole route twice. It was ok to see the entire city however more info needed on stops.”
cactusjoe • Submitted 26 Feb 2018

“
Make sure you book the tour with Port pick-up and drop off. Other wise you have to take a cab to Old Town to catch the bus. Well worth the cost.”
Tim V • Submitted 31 Jan 2018

“
Glad we used Viator as this saved us about half of what the ship was charging. There was some confusion as to where we should have gotten on the bus to begin with, and what the news letter told us to do. No problem, just extra walking, and we know we can all use more, especially if you're on a cruise. lol There were 4 ship in port that day, and the tourist areas were very congested. Ugh”
snow rider • Submitted 23 Jan 2018

“
when we got to cartagena in Spain we went to get on the bus and tolf not them, The tickets were for cartagena in columbia. The guy told us it happens a lot, we still went on the bus but had to pay for a new ticket, NOT HAPPY beware Cartagena Spain does not have this tour”
lorraine g • Submitted 01 Oct 2019