Golden Circle Tour from Reykjavik Including Gullfoss and Geysir 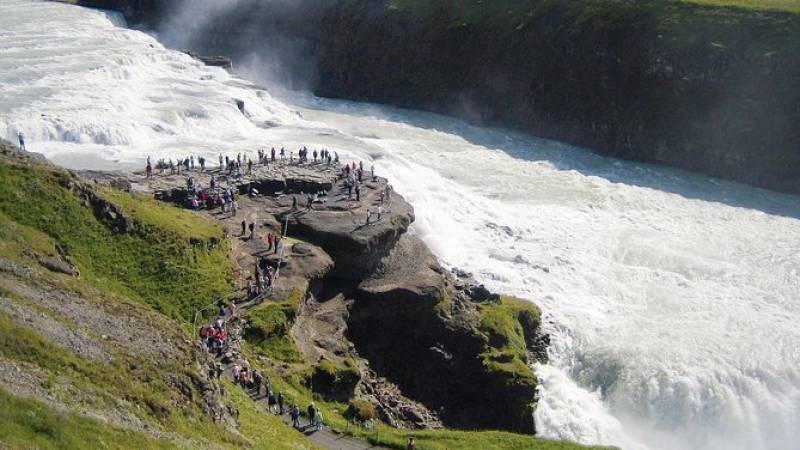 from USD $75.98
Join an expertly guided tour from Reykjavik to experience geysers, waterfalls and some of the most exciting natural phenomena Iceland has to offer. In just 6-7 hours you'll visit the country's best known historical sites and natural wonders - making this excursion a perfect opportunity to see as much as possible without spending too much time.
BOOK WITH CONFIDENCE: As members of ABTA and ATAS we are 100% financially bonded. You can book your day trip with us in absolute confidence, no matter where in the world you are.

Head first to Thingvellir National Park with your guide. It was here, in the year 930, that the Icelandic national parliament was founded. Known locally as Althingi, the institution stands today as the oldest of its kind in the world, but that’s not the only reason it’s such a special place. It is here, in the Thingvellir National Park, that the mighty tectonic plates of North America and Europe meet.

Continue on to the impressive Gullfoss waterfall, widely considered to be one of Iceland’s most beautiful sights. Gullfoss is fed by the Hvítá River, which tumbles down dramatically over a series of rocky steps into deep plunge pools below. Marvel at the falls’ power and perhaps take a moment to capture the views on camera.

Journey on to the Haukadalur geothermal area, where the hot springs of Geysir and Strokkur await. Discover impressive geothermal features such as bubbling mud pools, and marvel at the Strokkur geyser’s regular eruptions.

Iceland's most popular sightseeing route, where three of the country's most spectacular natural wonders can be seen on the same trip.

Traveler pickup is offered
Pick-up is offered from most hotels and guesthouses in the capital area, as well as from cruise ports.
Pick-ups from hotels in the city center are not possible from directly in front of the hotel due to traffic restrictions, instead passengers must come to the nearest bus pickup point.

Scoring an average traveller rating of 4.4 out of 5 based on the last 5 recent reviews

“
Everything was great ! The bus was very comfortable, the guide was great with a sense of humour and he shared so much throughout the day. The sights are spectacular ! Definitely recommend.”
Ritu L • Submitted 14 Nov 2019

“
Brilliant tour with our driver Sal and guide Simon would do it again. Simon was very knowledgeable and very friendly”
m.white2007 • Submitted 29 Jul 2019

“
As far as the tour operators they were very professional and kept to the time schedule very well. Gullfoss is absolutely amazing and worth the price of the tour by itself. But the other two stops were just ok. Thingvellir was ok. There are some nice views but really nothing you have to see. The last stop was the geysir Strokkur which is beside the famous geysir that no longer erupts. Strokkur did erupt every 8-10 mins but it was extremely anticlimactic. If I were to come again to Iceland I would 100% go back to gullfoss and skip the other two. U”
Steven N • Submitted 17 Oct 2019

“
We were very glad we took this tour, as it provided stops at three of the four geological/historic sites we hoped to see in a single day tour. Gullfoss was dramatic and beautiful. Geyser, though something we have seen at Yellowstone National Park in the way of steam vents and geysers, was interesting to see in such a concentrated area. The UNESCO/National Park at Thingvellir was of high interest to us; it was thrilling to see the rift between the North American and Eurasian tectonic plates and the actual walls of the plates. I would have given a 5 star rating to this tour if the guide would have commented about the parliament’s importance and its location in this valley and lake area.”
Kenneth D • Submitted 23 Sep 2019

“
Enjoyed this tour, particularly the Gullfoss Waterfall - quite spectacular. Being picked up for the tour at the cruise port was convenient and a factor in my decision to use Viator.”
KDLANGFORD • Submitted 05 Jul 2019

Golden Circle from Reykjavik with Gullfoss and Geysir
USD $75.98 / 6 to 7 hours