Trips and Tours to Suzdal

Suzdal, with its pretty meadows and livestock that graze freely along the grassy lanes, retains the feel of a small pastoral village, despite the host of impressive buildings and a population of over 12,000 people. It is not hard to see why the town draws so many visitors - in the beauty stakes Suzdal is unrivalled in Russia. The small and incredibly picturesque town is situated in the Vladimir region northeast of Moscow and is just one of the many ancient towns that form Russia's famed Golden Ring, alongside Yaroslavl, Vladimir and Kostroma to name but a few.

Dating back to 1024, ancient Suzdal once served as a royal capital and has seemingly been forgotten about since the 20th century and is today loaded to the hilt with old buildings, stunning medieval architecture and an astounding number of churches and monasteries. In fact it's hard to walk far without bumping into another church or cathedral with Suzdal's skyline a beautiful tapestry of golden cupolas and gleaming spires unmarred by modern high-rise buildings. Since the 16th century Suzdal has been a major religious centre in Russia with a number of its monuments receiving UNESCO World Heritage status over the years.

Suzdal provides a relaxing respite from Russia's big cities and with just a few hours between here and Moscow, it's the perfect place to enjoy a slice of rural Russia, enjoying countryside walks in the fresh air and soaking up the quaint riverside scenery of meadows and gently rolling hills dotted with traditional wooden cottages. 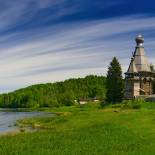 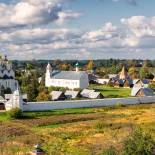 Best sites to visit in Suzdal

Dating back to the 10th century, the Kremlin is the oldest part of Suzdal and was once the base for Russian prince Yury Dolgoruky who founded Moscow as a minor outpost in its earliest incarnation. Like other Russian Kremlins, the historic citadel is enclosed by earthen ramparts and strategically position with one side against the river. Inside the walls stand the gold-spangled, blue-domed UNESCO-listed Nativity of the Virgin Cathedral, which contains beautiful 13th and 17th century interior frescoes and gilding. A number of historical exhibits from Suzdal's past are housed in the Archbishop's Chambers and the Bell Tower also contained within the Kremlin.

The sprawling 14th century Saviour Monastery of St Euthymius was built to reinforce Suzdal's northern entrance with a complex of buildings that includes a number of churches, a cathedral and the later addition of a prison. Reaching its peak in power in the 16th and 17th centuries with generous donations from Ivan the Terrible and noble Russian families, the monastery's wooden structures were replaced with imposing brick walls and towers which enclose the seven-domed Cathedral of the Transfiguration of the Saviour and the two-storey Assumption Refectory Church. The exhibits housed within the Monastery Dungeon provide a fascinating insight into the history of the various prisoners held here.

Originally founded in 1364 as a wooden church, the Intercession Convent became famous as a place of exile for the unwanted women of the imperial family with better-known figures sent here including the sister of Ivan the Terrible. In the early 16th century the whitewashed and three-domed Intercession Cathedral was added to the grounds and today it's one of Suzdal's prettiest pictures with flowerbeds covering the grounds and tall colourful blooms gently swaying in the summer breeze. It's free to enter and you may also catch sight of resident nuns outside their rustic wooden cottages or tending the well-kept gardens.

Located across the river from the Kremlin, this open-air museum displays the typical wooden architecture of this region in Russia with a host of assembled buildings that include log houses and windmills. Founded in 1968, the highlight of the museum is the 18th century Transfiguration Church which was the first building to be brought here from a nearby village. A less grand Resurrection Church was the second building delivered to the museum and today roughly 20 buildings decorate the grassy grounds. The remarkably well-preserved country houses perfectly illustrate how peasants would have once lived with furnished kitchens and bedrooms.

Recommended things to do in and around Suzdal

The flat roads, gently rolling hills and gorgeous riverside scenery of Suzdal lends itself perfectly to exploring the ancient town by bike. Bicycles can be hired from a handful of hotels for as little as USD $8-10 for the day and makes it possible to cover Suzdal's many churches and cathedrals at a leisurely pace, soaking up the scenery along the way.

During the summer months a small boat operates a 40-minute cruise on the Kamenka River, which runs through Suzdal. There are four departures a day from the bridge besides the Kremlin and it's a great way to capture the church-studded skyline from a different angle. It's also possible to hire pedalos on the river.

The Helio Park Hotel in Suzdal has a number of traditional bath houses available for hire, perfect for those looking to cleanse their bodies in a very Russian way. The wooden cottages are set beside a lake with a balcony and steam room as well as a separate living area with a couch and dining table so you and your companions can relax after sweating it out in the sauna.

Eating out in Suzdal

If you're looking for affordable Russian food in a quaint setting then the Chaynaya restaurant is a brilliant option with delicious blini (thin pancakes) and hearty borsch on the menu. Tucked inside a crafts market not far from the Kremlin, the furnishings of this popular place are reminiscent of a pre-revolutionary teahouse and there's plenty of tasty treats to tempt you including doughnut-shaped cookies known as baranki. There are also some more unusual mains on the menu worth trying.

This local's favourite is another good option for the sort of Russian food you'd expect a real babushka to be churning out at a family dinner. The small restaurant serves delicious and inexpensive soups, baked fish and meat dishes accompanied with potatoes as well as sweeter offerings in the form of pancakes with honey and cream. A soothing selection of hot drinks are also offered.

Translating as 'Salmon and Coffee', this popular cafe is a cozy and often busy place to enjoy a cup of the black stuff with light mains featured on the menu. The quaint interior features whitewashed wood panelling and kitsch floral furnishings while the menu includes a mix of Russian favourites and inventive international dishes from sushi to Greek salads. It's also popular for cakes and desserts with an extensive tea selection.

Situated within the Suzdal Kremlin, this restaurant serves an imaginative menu of upmarket Russian dishes including baked rabbit and stuffed karp - vegetarians may find options somewhat limited. It can get very busy here with tour groups eating in the restaurant while visiting the Kremlin though it's particularly lovely over the festive period when the dining hall is graced with a large decorated Christmas tree.

The western side of Suzdal's Market Square is lined with a somewhat tired-looking pillared arcade home to a number of shops and boutique stores selling a range of goods. Of greater interest to visitors is the collection of market stalls selling typical Russian souvenirs such as matryoshka dolls and lacquer boxes. Similar arts and crafts stalls also line the streets leading to the Kremlin and you can pick up beautiful carved wooden items at the Museum of Wooden Architecture shop.

Getting there and away

The best way to reach Suzdal from Moscow is by a combination of train and road transfer. There are no trains to Suzdal but it's only as little as an hour and a half to Vladimir by rail from where it's a further 45 minute drive to Suzdal. It is possible to travel by car the whole distance from Moscow but the traffic in the capital can often mean that the train is a quicker and more pleasant journey. Those visiting Suzdal as part of their Trans-Siberian Railway journey will need to get off at Vladimir also.

Suzdal really is a year-round destination with something to entice visitors throughout the seasons whether it's the flowering blooms of spring, the glorious warm weather of summer, the russet hues of autumn or the snow-covered landscapes of winter. When you choose to visit will depend on what you want to - if you want to cycle around town and take a river cruise then the warmer months are your better option while if the prospect of ice skating on the frozen river holds more appeal then visit when it's colder.

To further add to that special touch, the group sizes in our Signature range are mid-sized: small enough to be intimate, but large enough that you can bond with new friends over common interests.
