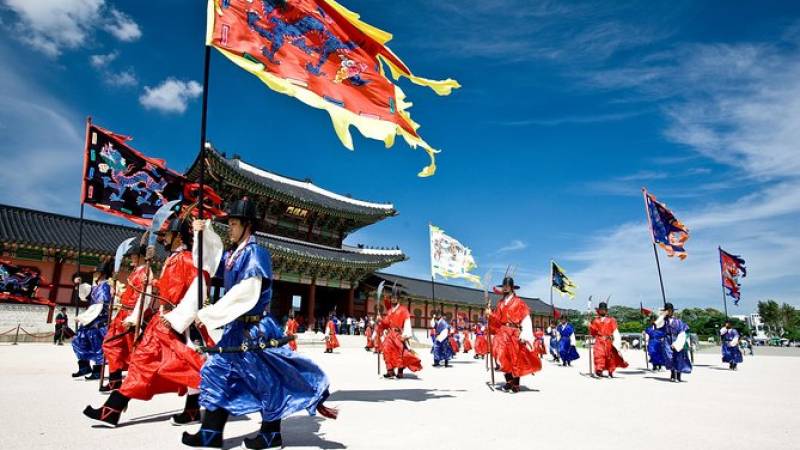 from USD $314.78
On this shore excursion from Incheon, you'll see all of most beloved attractions in Seoul. According to the available time of your cruise ship the itinerary, you will visit top ranking destinations in Seoul.

We, the most experienced agencies specialized in shorex programs of Korea will pick you up at the seaport of you cruise ship and then drop you off back to the port after the shore excursion. Let us help you explore and enjoy the Seoul most from Incheon seaport. Visiting attractions of this excursion is "must go" in Seoul, South Korea, e.g. Gyeongbok palace (Changdeok palace on Tuesdays), Insa-dong Korean culture street, Namsangol Hanok village, traditional market sightseeing to the various foods and clothing.
BOOK WITH CONFIDENCE: As members of ABTA and ATAS we are 100% financially bonded. You can book your day trip with us in absolute confidence, no matter where in the world you are.

Built in 1395, Gyeongbokgung Palace is also commonly referred to as the Northern Palace because its location is furthest north when compared to the neighboring palaces of Changdeokgung (Eastern Palace) and Gyeonghuigung (Western Palace) Palace. Gyeongbokgung Palace is arguably the most beautiful, and remains the largest of all five palaces.
*Closed on Mondays. Replaced to Changdeok Palace without a notification.

The main building has a hipped-and-gabled beautiful green roof covered with Korean style blue tiles from which Blue House takes its name. Actually it looks like green some times. You will have a quick photo time in front of the Blue House.

You will see the Korean Life Passage (from birth to death) in the National Folk Museum of Korea to understand how Koran life was and is in the permanent exhibition hall. The National Folk Museum is celebrating the first full moon of the Lunar new year, Jeongwol Daeboreum. Its name is museum but it is more like exhibition of 'Korean Lifestyle". There are 12 zodiac animals in front of the Folk Museum, why don't you find out which zodiac is yours.

Insadong is the place to look around lots of galleries, restaurants, ceramics, handy crafts and souvenir for reasonable price. Restaurants in this area are mainly specializing in traditional authentic food. Insadong was once a residential area for palace officials, royal families, and noble classes.

Stroll along Insadong street, you will be able to bumper into "Dragon Beard" - kind of high quality cotton candy for King. The making process from dough to 16,384 strings those looks like fine beards.

Namsangol Hanok Village opened in 1998 on the north side of Namsan Mountain in the center of the capital. This village has five restored traditional Korean houses, a pavilion, traditional garden, performance arts stage and a time capsule plaza, making it a perfect spot for both locals and tourists to take a leisure walk. Upon entering from the front gate, visitors will get a taste of the traditional life while escaping from the bustling city life of modern times. The traditional garden with its pavilion and the traditional houses create a peaceful ambiance before the forested Namsan Mountain. A time capsule commemorating Seoul’s 600 Year Anniversary was buried in 1994 at the highest point of the village and is scheduled to be reopened four hundred years later in 2394.

Opened in 1964, Namdaemun Market is the largest traditional market in Korea with shops selling various goods. All products are sold at affordable prices and the stores in this area also function as wholesale markets.