A Beginner's Guide to ANZAC 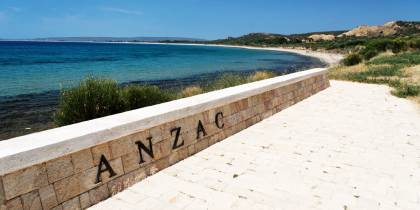 Every year hundreds of Australians and New Zealanders travel to Gallipoli to mark ANZAC Day. But what exactly does the day commemorate and what happened in Gallipoli all those years ago? Our Beginner's Guide aims to answer these questions and much else besides.

What was the ANZAC Campaign?Why did it take place there?Why were AU/NZ soldiers involved?How many went to war? Why did they go to Egypt first?Why were they fighting in Turkey? Where did they land?What happened when they arrived?Where are the memorials?When did the ANZACs leave?Visiting Gallipoli todayRecommended ANZAC Day Tours

What was the ANZAC Campaign?

Although most Australians and New Zealanders will be familiar with the First World War ANZAC campaign at Gallipoli, Turkey, other people may not be. The campaign was a bloody one, waged for eight months during the height of the conflict in 1915. Back then, modern day Turkey formed a part of the Ottoman Empire, which entered the war with an attack on two Russian navy ships in October 1914. The ANZAC campaign was waged between the Ottomans and Allied forces, largely made up of Australians and New Zealanders.

Why did it take place there?

The Ottoman Empire entered the war in November of 1914 on the side of the Central Powers (Germany, Austria-Hungary and Bulgaria). Their introduction into the war had a significant impact on the strategic situation in the war, particularly with regards to the Middle East. At this point in time the British held the Suez Canal – a vitally important shipping route between Europe and Asia, so with the Ottomans now on board with the enemy, a direct threat was felt. Britain and Russia were allied at the time, so another incentive for them declaring war on the Ottomans was the unprovoked sinking of two Russian navy ships by the empire.

Why were the Australians and New Zealanders involved?

During the time of the First World War, the British Empire was at its peak and was the largest empire to have ever existed. It encompassed countries including Australia, New Zealand, India, Canada and South Africa. When Britain declared war in 1914, these countries were all at war too. It was a different time, and many of the empire's dominions felt a great sense of patriotism towards Britain. The Australian Prime Minister at the time, Andrew Fisher, is said to have declared that Australia would rally to help “to our last man and our last shilling”.

How many went to war?

Out of Australia’s population of nearly 5 million, just under 10% (416,809) of Australian men followed their rite of passage into World War I. A similar percentage of New Zealand men also went with about 100,000 out of a 1.1 million population. These nearly half a million men became known as the ANZACs – the Australian and New Zealand Army Corps.

Why did they go to Egypt first?

Most of the ANZACs were not sent to Europe first, as they had expected, but to Egypt for their initial training. The British made this decision in order to increase the amount of troops guarding the critically important Suez Canal. This turned out to be a smart move when in February 1915 the Ottoman army attempted to seize control of the canal. Australian and New Zealand expeditionary forces helped the 30,000 Indian troops already in place to stop an attack – it is believed the Ottomans lost 2,000 men to the Allies 150.

Why were they fighting in Turkey?

A key strategic aim of Britain and her allies was to capture Constantinople (modern day Istanbul). This was the Ottoman capital and would essentially knock the Ottomans out of the war. The Dardanelles Strait, which is on the other side of Ari Burnu (original name of what is now ANZAC Cove), was a strategic stretch of water that connects Europe with the Sea of Marmara where Constantinople stood. If the Allies were able to capture Constantinople then not only would that end the Ottomans involvement in World War I, but it would also give the Allies a supply line to Russia and access to new areas in which to confront the Central Powers.

Were they supposed to land at ANZAC Cove?

No. The intended landing point was actually Gaba Tepe. The ANZACs ended up landing a few kilometres north by mistake, largely due to the 4am landing time - it was pitch dark. Some navigational errors have also been reported.

What happened when they arrived at Anzac Cove?

Unfortunately, the Ottomans had seen the ANZACs coming and were ready and waiting. An immediate firefight broke out on the beach at ANZAC Cove and on the first fateful day of the campaign, 25 April 1915, more than 2,000 ANZAC troops were killed and wounded.

Why are there memorials at Lone Pine & Chunuk Bair?

Numerous battlefields surround ANZAC Cove. The Battle of Lone Pine raged from 6 - 9 August and saw more than 2,000 ANZAC losses and around 7,000 Ottoman casualties. In the end, the ANZACS gained around 150m of territory, a paltry win for such awful losses.

Today the area is an Australian Memorial and Cemetery, home to 1,167 graves as well as the solitary ‘Lone Pine’ tree. At the time of the Gallipoli campaign the area was full of these Aleppo Pines (Pinus helepensis). Just before the Battle of Lone Pine the Ottomans chopped down all but one of these trees and used the pine logs as roofs for their trenches. The battle saw a lot of hand-to-hand combat in the Ottoman trenches where the Australians successfully gained control.

After the battle, Lance Corporal Benjamin Smith, who lost his brother here, gathered a number of pine cones from the trenches, which he later sent home to his mother in Australia. Thirteen years later she planted some of the seeds from which just two seedlings flourished. She donated the first seedling to the city of Inverell where it was planted in Victoria Park, and the second she gave to the Department of the Interior in Canberra. They planted it at the Australian War Memorial in the capital where it now stands 20 meters tall. A seedling from this tree was later donated to the Turkish government in order to mark the 75th anniversary of the Battle of Lone Pine and this is the tree that currently stands at Lone Pine in Gallipoli.

The battle of Chunuk Bair, part of the August Offensive, was without doubt the most significant battle that the New Zealand Expeditionary Forces took part in. Chunuk Bair was one of the three highest points on the Gallipoli peninsula and it was the New Zealand forces objective to capture it. The plan was for the Auckland Battalion to capture it at dawn on the 7th August 1915. However, they fell behind schedule and didn't launch the attack until mid-morning, suffering heavy casualties. The Wellington Battalion were ordered to follow suit but given what had happened to the Auckland Battalion, their commander, Lieutenant Colonel William Malone, refused to sacrifice his men in such a fashion. Instead they moved on in the pre-dawn darkness of 8th August and managed to swiftly move up to the summit.

They were surprised to find that, for the most part, the Turks defending the summit had largely disappeared. Noticing their mistake the Turks tried to attack at sunrise and the Wellington Battalion, assisted by the Auckland Riflemen and some British troops, began a fierce struggle to defend it from the attacking Turks. They were relieved later by the Otago Battalion and Wellington Mounted Rifles who managed to keep hold of the summit until the 10th August when a couple of British Battalions took over. It was then that Turkish commander Mustafa Kemal famously said to his troops - “There is no doubt we can defeat the enemy opposing us … When you see the wave of my whip, all of you rush forward together”. With this he launched a massive counterattack, which the British succumbed to and the summit was lost.

The remaining New Zealand troops were steadfast in stopping the Turks from flooding down the seaward slopes of the hill and as a result the Apex that continued up to Chunuk Bair was held by the ANZACs until the end of the campaign. The New Zealanders and British lost around 6,000 men between the 7th and 19th of August and the Ottomans lost 9,200. Today the area is home to the New Zealand National Memorial and the Ataturk Memorial.

On the 13th November 1915 Field Marshall Lord Kitchener, the Commander in Chief of the British Army, arrived at Gallipoli. After two days spent here he recommended to the British War Cabinet that the area be evacuated. He’d realised that without considerable increase in resources there was no way the troops could make any gains against the Turkish trenches. Adding to this the fact that winter was coming, and Gallipoli was famed for its fierce winter storms, it was definitely time to start planning an exit strategy.

It was decided that a three stage evacuation procedure was necessary. The preliminary stage involved a small reduction in men and equipment, keeping plenty of troops in the area for defensive purposes. Kitchener was also keen to get the ball rolling whilst waiting for Cabinet approval back in London. Once this came through the intermediate stage could begin. This stage would involve removing as many ANZAC troops as possible, leaving just enough to be able to hold off a potential Turkish attack for up to a week. These two stages saw troop numbers in Gallipoli fall from 41,000 to 26,000 men.

The first two stages were very much on a need-to-know basis and it was apparently not until the second week of December that regular soldiers realised a full-scale evacuation plan was underway. There was a mixed reaction to the news - some soldiers were happy to leave the area but some felt very sad to be leaving so many of their fallen comrades behind. Many troops tended to the small cemeteries on the peninsula in their last days at Gallipoli. These final troops left overnight between the 18th-20th December 1915. At 4:10am on 20th December the last ANZAC left North Beach – his name was Colonel J Paton, from Waratah, Sydney. The evacuation was a huge success and they managed to leave with hardly any casualties and without the Ottoman Army realising what they were doing.

It is possible to visit the numerous memorials and graveyards of Gallipoli year-round. However, many veterans and their families time their visit with the anniversary of ANZAC - the 25th April. We offer a range of specially crafted tour itineraries to Gallipoli each year - some that focus solely on the ANZAC Day memorial services and others that include further touring of Turkey.