Trips and Tours to Emei Shan

Emei Shan in Sichuan Province in Southwest China has been designated a UNESCO World Heritage Site due to its incredible natural beauty and historical Buddhist sites. The mountain is characterised by lofty ancient trees, spectacular waterfalls, pristine brooks and numerous Buddhist temples and is blessed with a temperate climate, making it a very popular summer destination.

A full day's hike to the summit is a truly unforgettable experience but for those less active there are mini buses and cable cars. It's considered a blessing to see the splendid sunrise over the mountain and well-worth rising early for.

At the Gold Summit 3,077 metres above sea level, the views are outstanding and there is a spectacular four-side ten-direction golden statue of Puxian, a representation of great practice and great virtue. It is also the highest golden Buddha in the world and the crowning glory of the mountain.

Close to the Xianfen temple is the Jiu Lao Cave, a deep Taoist cave where pilgrims go to burn incence. 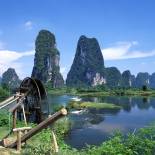 12 days FROM $3,785
Show All Tours
Tailor-made
Tailored To Suit You