Here are some reviews from our past travellers to Myanmar (Burma). For more details on each tour, simply click on the tour image.

We had a wonderful tour of Myanmar. We saw an amazing lot of diverse and fascinating places.Our guide,Min,was extremely helpful, friendly and professional.He went over and above what he had to do. All vehicles,hotels and drivers were very good.

This was my third trip with On the Go Tours, the two previous ones were excellent, this time there were minor problems but these were remedied fast by the company. It would have been better if there were fewer guides or if they had more information about whole trip. Myanmar is definitely worth visiting and I can recommend On the Go.”

What an amazing experience! Daut was the perfect host, organized, helpful and truly passionate about his homeland. Everyday he surprised us with some authentic local experience whether it was stopping by a family home to sit on the porch and sip tea or taking us to the morning alms in a revered location. The tour offered the ideal balance of sightseeing in the morning and lazy afternoons to head out and explore independently or laze by the pool. ”

Myself and my wife and two daughters thought this tour was the best holiday we have ever been on.The tour was very well organised by Bui and his Knowledge of Myanmar and its history was amazing. The motels we stayed in were very good. The days were very full and not a lot of free time, but this is what we wanted in a holiday, because there was so much to see in a small amount of time. (Bui 5* rating). 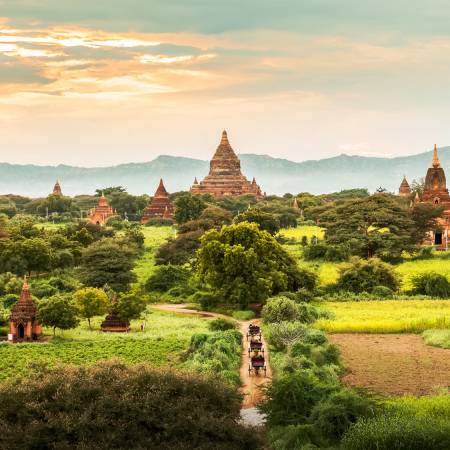 Meet Me in Myanmar

Tun was a great help in dealing with Thai Airway when our luggage didn't arrive. He was also an excellent guide with a great knowledge of all things Burmese and a good friend by the end of the tour. I (and the rest of the tour group) couldn’t recommend him highly enough.”

This was yet another great trip. The itinerary, included airport transfers and accommodation was great and the local guides were excellent. This was our 5th time with On the Go!”

The 12 day Best of Burma tour was inspirational in terms of the different cultures in the states that we visited, the religious buildings (Buddahs, Temples, Monasteries) and the activities and adventures undertaken. I was so pleased to be able to see this country while it is still developing and progressing after years of repression and before the tourism industry takes it over (5 million tourists expected in 2015). There were only three of us on the tour and we were all over 60 years of age! Being used to a lot of walking and other exercise at home I was able to climb steps and get on and off boats quite easily but the other two ladies in their 70's struggled a bit sometimes particularly with the "light" trekking in Kalaw. However, they were very determined and managed most activities.

The organisation of the tour ran smoothly and the first guide who met us at Yangon airport (Win) was helpful and informative when we were seeing various sights in the city. He also gave us quite a lot of information about Buddism in order that we could understand the reasons for so many archeological religious buildings.

The guide who met us at Mandalay was also very helpful and knowledgeable about the area and various stupas and temples. He noticed that the two older ladies needed help at times and was very helpful in getting them on and off boats.

The 11 hour boat trip from Mandalay to Bagan was very pleasant but too long and I think the concensus of opinion was that we would have rather have flown to Bagan and had more time for further sightseeing. The food on board was not very good and stomach upsets ensued!

We were met by our Bagan guide (whose name escapes me!) who was probably the most knowledgeable and helpful of all our guides. He took particular care to help the two older ladies in Kawlaw and when they decided not to attempt the steps at Mt Popa temple, he ensured that they were well looked after by the bus driver. He had a good sense of humour and kept us all cheerful. We were very sad to say goodbye to him at the jetty of Inle Lake but was then looked after by yet another guide (Sai) for the day. He gave us information of the Lake and accompanied us to the restaurant, a monastery and silk making factory before taking us to our water world hotel. At the end of our stay at Inle Lake, we were met by a Columbus driver who took us to Heho Airport for the return journey to Yangon.

Cost wise the tour was fairly expensive compared to the Vietnam/Cambodia tour as there were no meals included (apart from breakfast) and there were 5 guides to tip!! However, I appreciate that it is early days for tourism and that hotel costs may still be expensive. We were asked by OntheGo to take USD as there were no ATM's in the country but this was not correct in our experience. The restaurants/hotels were quite fussy about the state of the dollar bills and I had some refused on one or two occasions. Luckily I had no money stolen on this tour but there was an attempt to cut the strap of my shoulder bag whilst we were at the Indein market at Inle Lake which I discovered when getting back into the boat.

Altogether I loved this country and would return for a further tour should the north and western areas be more accessable in the future. ”