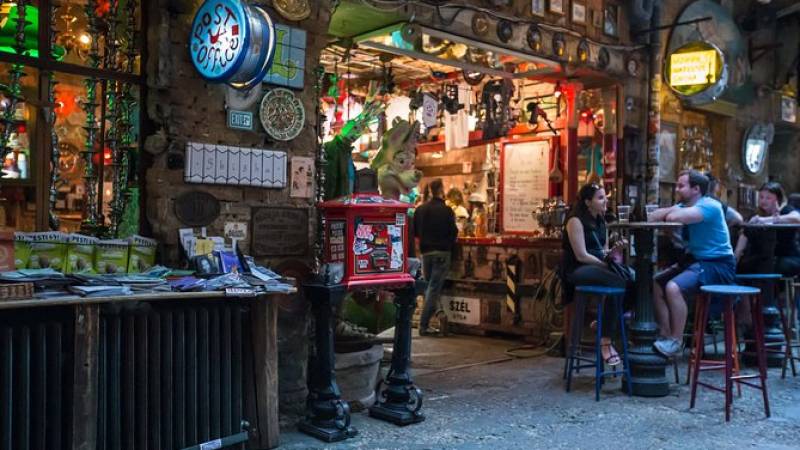 from AUD $132.42
Of the many things that give Budapest its unique flavour, the ruin bars are one of our favourites. They make night-life in Budapest exciting, colourful (literally), and always unexpected. The ruin bar phenomenon began in Budapest in the early 2000s, concentrated in the seventh district, and has been evolving ever since. What is a ruin bar? Join us to find out, and to explore this special aspect of Budapest’s night-life scene. Learn (over a few drinks), the history that led to the development of these bars, the cultural and artistic significance of them, how they have influenced the city’s entire night-life/drinking scene, and how they have impacted the neighbourhood.
BOOK WITH CONFIDENCE: As members of ABTA and ATAS we are 100% financially bonded. You can book your day trip with us in absolute confidence, no matter where in the world you are.

Deep inside the dense history-filled Jewish quarter, and hidden within crumbling, pre-war buildings with battered bricks and graffiti, are some of Budapest’s most popular hangouts. From the outside they may look like squatters blocks, but inside are the ruin bars—filled with unexpected layers of detail—which have become Budapest’s own brand of local cool. Abandoned buildings, old cellars and derelict spaces have been transformed into dozens of these wildly decked-out bars—think old bathtubs and broken-down cars turned into seating, ladies walking around selling carrots, and all manner of nostalgia stuffed into every nook. Some have been around for more than a decade, while others disappear just as quickly as they pop up. They are not simply places to get a drink. Over the past decade, ruin bars have introduced a new wave of entertainment in Budapest and expanded beyond simply serving booze into cultural, artistic, and sometimes, gastronomic hotspots. Concentrated in the seventh district, they are at the edge of where the mainstream meets the contemporary underground art scene, and their success has been a catalyst for gentrification in this quarter. As the neighbourhood continues to change, however, ruin pubs may be forced to change along with it. Join our tour to experience a handful of ruin bars in different styles. We’ll look at many of them, and stop for drinks at four or five places. We’ll discuss what was happening in Budapest in the early part of this century to encourage these types of bars to proliferate, and why they continue to thrive. How have they changed the fabric of the neighbourhood, and how are they still evolving? Join us to find out!

Learn—Learn about what propelled the development of the ruin bars, and how things have changed in Budapest since then. We’ll delve even deeper into the history of the seventh district, and look back at what happened during World War Two to change the fabric of this neighbourhood, which is now known as ruin bar central. We’ll also talk about the drinks, and discuss Hungarian wine, spirits, and beer.

Experience—Be guided through the seventh district’s ruin bars, and experience the phenomenon from a local perspective. We’ll take you to a range of places which have different styles, and attract different types of crowds.

Taste—Drink like a local out for a night on the town! You’ll have four or five drinks, which could range from local wine or fröccs (spritzer), to beer or spirits (such as the local favourites, Unicum and pálinka).

Walk— We will be getting from bar to bar on foot, so be prepared for a bit walking. However, the places are fairly close to each other and most of the tour will be spent at the bars (where we can sit)!

Scoring an average traveller rating of 4.37 out of 5 based on the last 19 recent reviews

“
This was a fun addition to my trip to Budapest. Our guide, Ferenc, was great. He shared a lot of information about the Jewish district as went along. There is so much history behind the district where the Ruin Bars are, which makes this experience a unique one in that you are learning a bit about the history while going from bar to bar. I would highly recommend this tour!”
Bethany N • Submitted 25 Mar 2018

“
If you enjoy seeing the nightlife of the city, meet new friends, and throw back some palinka, this is ideal. I can't say more positive things about this tour or the tour guide, Ferenc. I'd post some pictures, but I was having too much fun. I'll have my wife post a few on Twitter. Ferenc partied with us through the ruin bars and stayed out with us after the tour ended. Crazy fun. Met some amazing people from Australia on the tour. Hard to select a favorite bar, but Pharma was excellent... they make you a customized cocktail. How could you want anything more. Fantastic tour.”
DrWojo • Submitted 16 Oct 2017

“
This is a brilliant tour Thomas was fantastic lots of fun we were a group of 12, he got just the right combination of history and alcohol. Definitely 5 for us”
Jane • Submitted 09 Oct 2017

“
Amazing tour, amazing guide Tom. He made the tour very interesting and overall we had a fabulous evening.”
Ravish • Submitted 14 Sep 2017

“
Even though our party of six were all 55 in age we had a great time. Our guide was excellent and we enjoyed the food and drinks. Our guide pointed out some good restaurants to try but we were leaving to go on a river cruise the next day. Therefore, I would advise other visitors to book this tour early in their stay in Budapest so they could possibly visit one of the restaurants recommended.”
Mark B • Submitted 16 Jul 2017

“
Our tour guide Daniel from was so knowledgable!he has great knowledge on history of ruin bars and all of budapest.he ensured we were all comfortable and it was blessing to have him as our tour guide.i definitely recommed this tour!!must do!”
Radhika C • Submitted 05 Jul 2017

“
Awesome tour with our guide Tom. Very cool to see the ruin bars and learn of their history while sampling local food and drink. Highly recommended!”
jannlstone • Submitted 01 Jul 2017

“
This was a fantastic tour - one of the best I've ever done. Frank is an excellent guide - so friendly and easy going that it's easy to forget you're on a tour and instead just out with a friend. There was a perfect balance between information about the ruin bars and just enjoying being in them. The tour was great value - six drinks and a street food meal included.”
Yvonne D • Submitted 20 May 2017

“
Our tour guide for the evening, Ferenc, was simply amazing!!! He led my wife and me and 1 other very nice couple from LA on a walking, drinking and sampling tour of the Ruins Pub district. He was warm, funny, extremely enlightening, and really enabled us to understand the Hungarian and Budapest culture much more in depth. He took us to 5-6 fantastic stops, each one very different, and each one a great experience. When the evening ended we felt that we hade made a few fast friends in Budapest. I'd highly recommend this tour, especially with Ferenc.”
Duffy • Submitted 24 Apr 2017

“
Frank gave an amazing tour of places to eat and drink in the Ruins. A person could explore on their own and pay less, but would miss out on a great conversation with a local who is passionate about Budapest. Our only disappointment was losing his email address for a recipe he offered to share.”
James B • Submitted 23 Mar 2017

“
This was an interesting experience and the Ruin Bars are quite amazing. I didn't love the drinks that were offered as complementary at a couple of the places on this tour, but regardless we enjoyed this!”
Alyssa D • Submitted 04 Jul 2018

“
Really enjoyed this trip. A fabulous way to see and learn about the city. Our tour guide Daniel was very knowledgable and made this tour extremely interesting.”
Colette G • Submitted 11 Apr 2018

“
Didn't really know what to expect but it wasn't what I imagined. Some reviews said go hungry but we only ate at one bar and it was 2 small tacos. Definitely not filling enough. There was only one other person on the tour so lacking in the fun factor also.”
george • Submitted 18 Jun 2018

“
Got to see a section of the city that we didn't know was there. However, the guide seemed new to the tour or just uncertain to how to best conduct tour. Went to several places that weren't actually open, so we kind of wandered after that. Spent more time walking from place to place then sitting in ruin bars. Check out this part of the city, but can do without the guide.”
calhoun8b • Submitted 20 Jun 2017

“
I did not get to go on this tour, my plane was delayed I tried to call the tour people to let them know I was stuck in Finland and could not make the tour, the first time I got thru they hung up on me the second time I got their answering machine, the third try I spoke to a man who told me I might be able to take the tour the next day and that they would call me back shortly. I also emailed them thru their outnumbered web address that was provided on my receipt. I called them again later that day to confirm but no one answered, nor did they return any of my calls. So I got stuck in an airport due to weather, then got no response from the tour people After they said they would call me back and I was out the money I prepaid for 2 people.”
Natalie • Submitted 29 Dec 2017