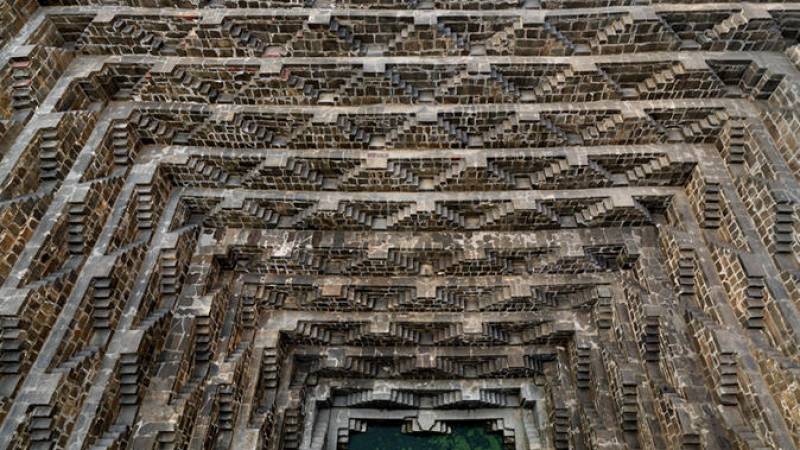 from AUD $652.84
On this full-day excursion see the amazing 8th century stepwell called Chand Baori at Abhaneri village. Opposite the the stepwell is the temple of

Harsh Mata - the Goddess of Happiness. From here, drive to the magnificent Fort Madhogarh atop a hill. Enjoy sumptuous al-a-carte lunch, hosted by a scion of the royal family of Madhogarh. Take a walking tour of the village to see craftspersons at work.
BOOK WITH CONFIDENCE: As members of ABTA and ATAS we are 100% financially bonded. You can book your day trip with us in absolute confidence, no matter where in the world you are.

At 7:30am, you will be picked up by our escort and will drive to Abhaneri located about 70km from Jaipur. This village has the iconic 8th century stepwell called Chand Baori.  The stepwell has 450 steps and has exquisite stone carvings. For centuries, this well served the nomads

passing through this region on the Silk Route. Opposite this well is the 8th century temple dedicated to the Goddess of Happiness -

Harsh Mata. Be blessed by the Goddess!

From here drive to the magnificent Fort Madhogarh atop a hill to be met by the owner - a scion of the royal family of Madhogarh. Enjoy a barbecue lunch with a beer, served to you in a beautiful environment.

After lunch, take a walking tour of the village to visit a children's school and craftsmen and women making pottery and bangles. You will return to Jaipur after a memorable excursion and will dropped back off to your hotel.

“
While we did get to engage on most of the activities listed in this tour - there was definitely something wanting in the guiding and thoroughness of activities. Our driver was very nice, brought us out to Chand Baori where we were met by a local, but I wouldn't call him an expert, more like someone who knows a vague amount of information about the stepwell gleaned from his time living in the village. We were able to walk around the stepwell, we technically went on a very short 'tour' of the village, which included such highlights as walking into someone's house for about 12 seconds to see what it was like, but was essentially intended to drive us towards a house where there were numerous rugs for sale. Afterwards we were pointed in the direction of the temple, a sort of beautiful reconstruction of a temple that was destroyed down the road, and told we could walk around it ourselves. After the temple and the stepwell things got a bit strange, and here's the point at which I realized it was a very good thing I was neither alone nor an inexperienced traveler. We left the Agra Highway and 'explored' the Indian country-side read here - got a bit lost but eventually found the way for a couple of hour en-route rather circuitous to the Fort. It was lovely to see the Indian country-side, but was by no means a described nor expected part of the tour for which we had paid. Eventually our unflagging driver received enough local direction to find his way to the Fort. It was ultimately a very beautiful fort, gorgeous views of the country-side and incredibly old painted and preserved rooms, then we were eventually lead to a nice Indian Rajasthani lunch. There was no 'scion', I'm not sure such a person exists, the fort is now a heritage hotel that large tour groups can book stays at. Our driver found a much quicker route back to Jaipur for which we were very thankful and we got back after about 10 hours of travelling. So while Chand Baori is a beautiful site definitely worth seeing, as was the Fort, the rest could be taken or left. I'd recommend going with a different group, or psyching yourself up for a very off-beat often confusing tour of the Indian country-side with small pitstops to take photos at interesting landmarks.”
Lexi D • Submitted 09 Jun 2017