The Best of Barcelona in One Day with Optional Lunch 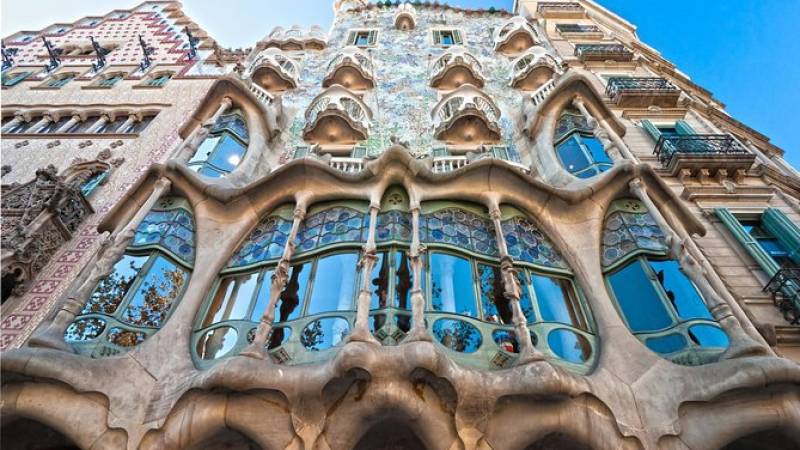 from AUD $168.82
Discover the highlights of Barcelona and some of the most important modernist buildings in Barcelona on a single day. Enjoy a walking tour of the Gothic Quarter and enter the beautiful Cathedral of Barcelona. Take a panoramic tour through the city and visit the Montjuïc Castle. Explore Park Güell with a local guide and learn about all the secrets it hides. Admire Gaudís’ most important buildings and marvel at his artistic skills.
BOOK WITH CONFIDENCE: As members of ABTA and ATAS we are 100% financially bonded. You can book your day trip with us in absolute confidence, no matter where in the world you are.

The first part of the visit consists in a guided walking tour through the small and narrow streets of the Gothic Quarter, the oldest part of the city. During this early visit we will see Las Ramblas, the Cathedral Square, The Cathedral, the Old Jewish Quarter, among other interesting places. You will be given of some free time to visit the Cathedral by yourself.

You will go through the Triumph Arc, the Olympic Port and the Olympic Village, built in 1992 due to the celebration of the Olympic Games in the city.

Next, listen to your guide’s explanations as we drive near the sea. Discover the changes to the coastline of Barcelona for the Olympic Games in 1992. See the Olympic Port, the beach and the fisherman’s quarter from the bus, called Barceloneta.

Its origins date back to 1640, being the oldest fortress in the city. During the centuries has been a watcher tower, dungeon, execution center and, above all, an ideal viewpoint to know what’s going on from a bird’s eye-view. Today, it is an incomparable landscape to enjoy a 360º panoramic picture of Barcelona and being part of the numerous social, civil and cultural events taking place here. Take a trip to Barcelona's hectic past and enjoy the most privileged views of the city.

In the Montjuic Mountain we can find the Olympic Stadium, which is an important place because it was the main scenery of the Olympic Games in the 1992.

We will have the opportunity to enjoy the panoramic views of the city riding the aerial tramway (subject to the weather conditions).

Check in back again at our office in central Barcelona 15 minutes before the starting time of the afternoon activity. Meet your guide and come aboard an air conditioned coach towards Sagrada Familia.
Enjoy a panoramic tour of the exterior of the Sagrada Familia. Marvel at the extensive symbolism of its façade details.

Board your bus back again for a short trip to the Park Güell, located in the upper part of the city. Enjoy a guided tour of the Park with your local guide and discover why it is one of the most emblematic works by Gaudí. Wonder at the magnificent skills of Gaudí and its organic style, displayed all over the park. Did you know the Park is a World Heritage Site by UNESCO?

Follow your guide and board the coach again for a short trip to Passeig de Gràcia, the most important street in the city. Stroll down the same admiring the many modernist buildings, learn about their history and significance. Stop in front of La Pedrera and at Casa Batlló, marvel at Gaudí’s abilities and enjoy the explanations of your guide.

“
This was an excellent tour as the sights in Barcelona are far apart and difficult to reach on your own during a day. We were limited on time in the city and this tour provided an excellent overview with many historical details. My teens were with me and enjoyed the tour as well. Jorgie and Cecealy were excellent guides.”
Sally S • Submitted 03 Aug 2018

“
Tremendous tour guide and gave us so much information about this beautiful and stunning city!!!!”
Coach Billygolfer!!! • Submitted 09 May 2018

“
Such a great tour. Highly recommend this tour especially when you're on a short trip in Barcelona. We met new friends during the tour and kept in touched. :-”
googa31 • Submitted 20 Feb 2018

“
Excellent for seeing the city and learning the culture. Would definitely recommend to any firstimer!”
TJ • Submitted 29 Jan 2018

“
Again, a fabulous overview of Barcelona, History, Architecture, sights, and gave us insight into addtl sites we wished to see during our stay!”
Diane P • Submitted 17 Jan 2018

“
We had an amazing time. The first part of the trip shows you all of the major sights of Barceolna on a bus tour. After reaching the top of a mountain/ large hill you have a beautiful scenic view overlooking Barcelona. We walked through the historic streets surrounding the Catherderal of Barcelona, before the first half of the tour ended. The second half of the day was spent visiting the major artistic achievements throughout the city. Both of our tour guides were very knowledgable, and friendly. We had a fantastic time, and would definitely recommend.”
Josh S • Submitted 23 Nov 2017

“
Tiring but well worth the effort. So much packed into one day. Amazing.”
Michael D • Submitted 18 Nov 2017

“
Be ready for a long day. Well worth it if you don't have a lot of time. They will take you to Sagrada familia for photo opt but you will not be able to go inside. Also you get to ride the cable car which is pretty cool. The Parque Guell was the highlight. Then you walk around the city with the tour guide that was very informative”
Charlie • Submitted 18 Nov 2017

“
Our wonderful tour guide both of them very patience and professional.My Mom and I first time to Barcelona and we love it. Both of them were extremely knowledgeable of the area and its history. We will back for sure and use Viator again! Thank you both of you , great job!!!!”
Debbie Han • Submitted 24 Oct 2017

“
This was a very good tour since it shows you the city and also the famous works of Gaudi. However, be aware that this is only showing you the outside of the Sagrada Familia. Luckily, there was a ticket booth outside the Sagrada for an audio tour of the inside of the church. The tickets do sell out so our tour was on a Sunday and tickets were sold out until Wednesday which was not a problem for us since we were staying in Barcelona for about 6 days. We ended up cancelling one of our tours though to accomodate this tour. Our tour guide Lydia was also very good and very caring. She was very knowledgeable. Gerri and company”
Geraldine G B • Submitted 16 Oct 2017

“
Excellent Tour, a lot of information of Barcelona and the placed visited, were amazing.”
Paul C • Submitted 15 Oct 2017

“
This tour consist from 2 parts with 2 different guides .So first one gives you sightseeing of city from different points: scenic views Mountjuc from cable car, from Spanish Village, from Barceloneta and Rambla and so on. And second one gives you Barcelona of Gaudi. I loved both parts of the tour and would recommend if you are first time in Barcelona.”
Irina V • Submitted 14 Oct 2017

“
You get a complete overview of the highlights of Barcelona. Mike and Antoinette”
MICHAEL M • Submitted 11 Oct 2017

“
This tour lived up to our expectations, giving us a great snapshot of Barcelona in one day. The tour guide was great and the pace of the tour was just right giving us enough time to take those unforgettable pictures.”
Joseph R • Submitted 07 Oct 2017

“
Excellent tour! Guide with plenty of knowledge made it very interesting! It is a must for those with little time but that want to use it to the max. Well organized.”
Arnulfo P • Submitted 10 Sep 2017