Last week I had the pleasure of visiting Sultan Hassan Mosque and Madrassa (religious school) in the heart of old Cairo. Sitting within the shadow of the imposing Citadel of Saladin, I would dare to say that this most strikingly beautiful mosque rivals the more famous Alabaster Mosque of Mohammed Ali.

Most travellers to Egypt will venture inside the Citadel Walls to tour the grand Mosque of Mohammed Ali. But the Sultan Hassan Mosque is just as impressive, yet is very rarely visited. 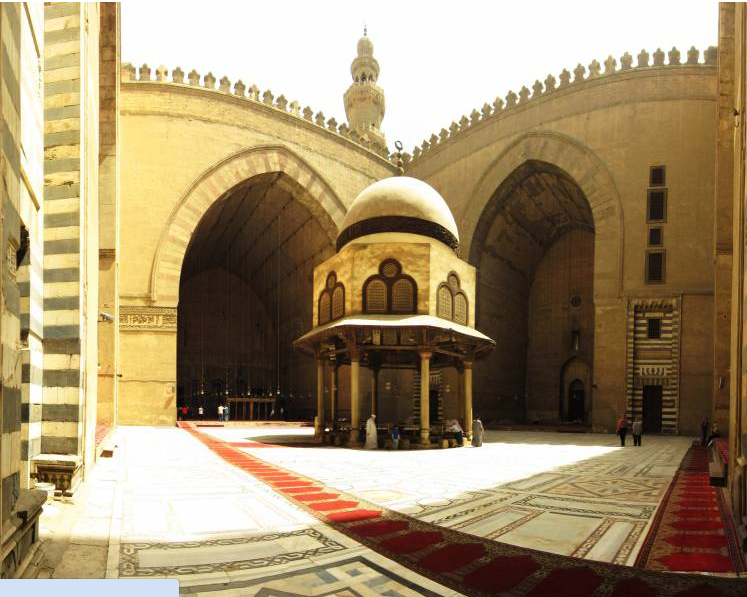 The founder of this gigantic monument is Sultan Hassan, son of the great Mamluke Sultan Al-Nasser Mohamed Ibn Qalawoun. Sultan Hassan ruled twice. The first time was in 1347, when he was 13 years old. This weakness meant he was easily dethroned by the other Mamluke princes and generals.

The second time was in 1356. But once again, before he had time to put an end to the power of the princes and high officials, they revolted against him. It is said that he escaped from the Citadel and hid in Cairo. But he was found and imprisoned, never to be seen again!

Sultan Hassan gave the order for the construction of the Mosque and Madrassa, with the work taking some 4 years. It was designed so that each of the four main Sunni sects (orthodox Muslim, or Sunni rites, consisting of Shafite, Malikite, Hanefte, and Hanbalite) has its own school while sharing the mosque.

Built of solid stone, the Sultan Hassan is based on a classical cruciform plan. This means that the Sahn (court) opens from each of its sides into a separate liwan. This is an enormous vaulted hall, each serving one of the four religious schools.

As one enters the Mosque, there is an impression of height. Especially from the towering doors decorated in a Mamluke fashion. The court is almost square, with a large ablution fountain in the centre. This is covered with a wooden dome, carried on 8 marble columns decorated with a band of inscriptions of The Qur’an. The grandness of space and geometrical uniformity is what initially captures the eye.

Beauty and enormity aside what I most enjoyed about my visit is that there were relatively few visitors. It seemed that the guards and the Imam were not used to having many visitors. So they were more than happy to chat and point out finer details to the structure that most of us would have missed. We were also delighted that the Imam gave the call to prayer during my visit. He had one of the strongest and most beautiful voices I have ever heard. And it sounded even better in this wonderful mosque to which he was ever so proud.

Explore the Islamic centre of Cairo on our Backstreets of Cairo add-on tour, which can be combined with any of our Egypt group tours!