Katie and Evan have completed their Trans-Siberian adventure and have arrived in Beijing on the first stop of their Beyond the City Walls tour. The Forbidden City, The Great Wall and a tummy-full of roast duck. Read on!

The weather in Beijing was absolutely perfect. There was a nice breeze, blue skies, and the sun was out in full force. It was warm but not too hot, just right. Goldie Locks would have approved!

First up on the agenda was a visit to Tienanmen Square. Unfortunately, somebody important from Australia was visiting the capital and the square was closed for visitors to walk through. I honestly can’t remember who it was – Nicole Kidman maybe? We spent a couple of hours walking through the grounds of the Forbidden City and stopped on occasion to pose for a few photos with the locals and took a few minutes to have a quick bite to eat inside the City. They have done an excellent job of preserving the history of the Forbidden City but I am going to question the authenticity of ham and cheese sandwiches being served at the cafeteria. Do you think the guests of the Emperor would have been chowing down on a ham and cheese sandwich? I would have felt more in the era if they had served Peking Duck. Is that too much to ask? Perhaps I’ll write a letter to the curator of the Forbidden City and maybe there will be Peking Duck Sandwiches added to the menu. 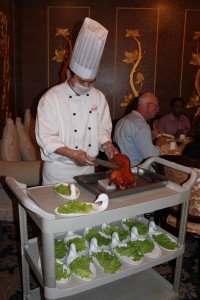 After our tour in the City we went on a Hutong Bike tour in a rickshaw through the narrow alleys that weave around the many traditional style courtyard residences. During our tour we visited a family who has lived in their home for five generations. The mother of the family expressed a little concern that all of her children have moved into apartments and have shown no interest in having it passed down another generation. I reassured her that I could easily be adopted into the family and would love more than anything to live in such a cozy traditional part of the city.

After getting stuck in a massive rickshaw and car traffic jam we went to an acrobatic show and then finished our evening up with a delicious dinner of Peking Duck. If you ever find yourself in Beijing unsure of what to have for dinner, eat the duck – you will not be disappointed! The dinner is a roasted duck that is sliced into many pieces that you put onto a very thin tortilla type pancake with onion, cucumber and hoisin sauce. It is amazing. I am almost positive I could have eaten a whole duck to myself that night. Before coming to China I had convinced Evan that restaurants do not provide forks to foreigners and that everyone in China had to become accustomed to the daunting task of using chopsticks. Well Evan surprised us all with his chopsticks for dummies that he had brought from home. These chopsticks are specially fused together at the top with a spring so that any child, or in this case adult could use them. Sadly, somewhere along our journey from Canada to China they had broken.  Being absolutely terrified that he would never see a fork, Evan had taped them back together with the red tape we have been using to make our signature glasses. Let’s just say that his repair job didn’t holdup too well and he was happy to find out that I was fibbing and there were indeed forks for foreigners in restaurants and he didn’t starve. 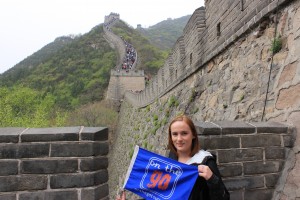 The Great Wall of China was where everyone in our tour group was introduced to the way the Chinese line up for the toilets. Allow me to teach you how to line up for a pee in China.

1.  Fight your way into the common area where the toilets are located.

2.  Choose any door you feel you can easily push your way into.

3.  Once that door opens (regardless if someone was waiting in front of another door before you) you take it.

4. Don’t hesitate or someone will out-manoeuvre you to the toilet.

And 6.  Get over your fear of using a squatty potty!

On a side note it’s always good to be armed with toilet paper and hand sanitizer because for the most part there isn’t any provided in the bathrooms. When we pulled up to the Great Wall so did a few other buses full of Chinese tourists. It was a fifty person fight for only five toilets. 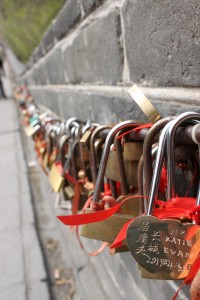 and buy a lock to lock along the wall. There were a few options, one being to buy a lock with a key and throw away the key or two being buying a lock that had no key. What a gamble. We decided we love each other and we were going to go with the one with no key. Fifteen dollars later we have bought our little love lock and while we were waiting in line to engrave our names onto it, Evan swings it around and locks it! Clearly showing how much he does love me, off he marched to purchase another one. This time I held a firm grasp on it and it made sure it stayed unlocked until it was meant to be locked.

Our blog – THE INSIDE TRACK – features our latest adventures, plenty of useful travel tips, fabulous travel photos and, we hope, lots more stuff to whet your appetite for your next holiday. There are regular contributions from all of as at On The Go Tours as well as from travellers from the far corners of our planet.