Music, dancing and folklore are a huge part of the traditional Indian way of life and modern Bollywood-style dancing and music have a lot to thank their forebears for.

Before it really made its mark on the international film scene with many a western homage to the genre, I wrote ‘Bollywood’ off as nothing more than a transposed version of American film star culture with a bit more dancing. After all, I thought, what kind of a name is ‘Bollywood’?

I soon found that as far as mimicry issue goes, Indian cinema has influenced western cinema more than we might think at first. The fact is, people all over the world love Bollywood, and Indian cinema in general. (And yes, there is a difference.) Fast-forward a few years (post-Slumdog Millionaire) and it’s clear that this is a massive self-sufficient industry with its own style, and it deserves some recognition at least for the sheer scale of the industry. India has been the world’s largest producer of films since the 70s, and even as far back as the 1930s there were upwards of 200 films a year being made and released on the subcontinent. 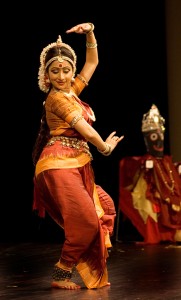 If you’ve ever seen one, you’ll know that Bollywood films are distinctive. The bright colours and synchronised dance sequences might seem a bit odd at first to the western viewer, but you’ll find that traditional Indian festivals are mostly about music, poetry, dancing, singing and chanting. Dance and music were an important part of Indian courtly tradition, so it’s entirely fitting that these traditions continue in a modern setting. Like any creative industry, Indian cinema naturally draws on traditional cultural elements that make it look and feel the way it does.

If you’re interested in learning a little bit more about Bollywood dancing, why not add a Bollywood dancing bolt-on to your next tour? Taking place at the Delhi Dance Academy, the course includes a 10 minute introduction and 15 minute warm-up, followed by three dancing sessions (the first is 40 minutes, the next two are 20 minutes each, with breaks in between) intended to teach you some of the most popular moves in the Bollywood dancing tradition. Designed to give an introduction to the Bollywood style of dancing, our course has something for everyone. The course also includes transport to and from our hotel.

If you’re interested in seeing even more of the traditional side of Indian culture, take a look at these festivals on the subcontinent that show off some of the best that India has to offer:

A whole week of traditional classical dance highlights just how rich and diverse these traditions are. Artists from all over the country perform various styles against the backdrop of the temples. Sculptures at the temples in Khajuraho reveal just how important dance and music are to the Indian culture.

Diwali is one of the highlights in the Indian Festival calendar. Probably the most joyous and well-known of the Indian festivals, Diwali is a five-day festival of lights and a time for decoration and celebration.

Diwali commemorates different deities and events depending on the area in which you find yourself. Whichever their preference, celebrants decorate their homes with flowers and mango leaves, deck themselves out in new clothes, light clay lamps, set off fireworks and exchange sweets and gifts with friends and relatives. To westerners, Diwali will probably seem a bit like Christmas, with fireworks.

Home also to the world-famous Taj Mahal, Agra hosts this annual celebration of culture and heritage through local folk music, classical dances, arts and crafts. Ride elephants and camels, eat local cuisine, see traditional music performances and get a real sense of Indian culture on the doorstep of one of the world’s most recognisable buildings.

Opened by a procession of bejewelled elephants and camels, drummers, artists, musicians and craftsmen, this annual festival lasts for ten days, drawing craftsmen from all over India to the country’s most famous landmark.

Our new India brochure has just been released: order your copy now to read more about our tours to India and beyond.