This week’s guest blog is by Cathy Winston, (www.mummytravels.com) a freelance journalist and travel writer who tweets (not just about lemurs) @cathywinston. 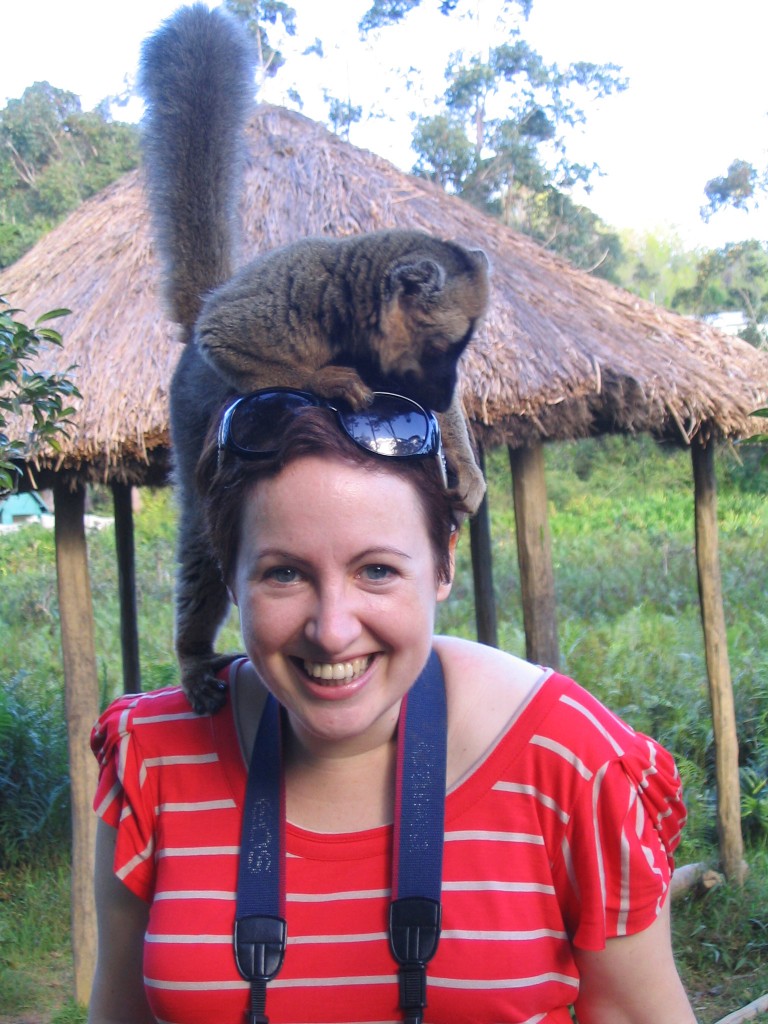 As soon as I produced the banana, there was a rustle in the trees and two furry inquisitive faces appeared. Yes, show a lemur even the sniff of some fruit and they’re all yours.

And in one athletic flying leap, the first of them was on my shoulders, clinging on to my hair with one soft leathery paw and reaching for the small section of banana in the other. I’d already half lost my heart to lemurs before I even set foot in Madagascar but coming up close to the real thing ensured that there was no going back, as my friendly long-tailed scarf wrapped himself contentedly around my neck.

There are 101 species of lemur on Madagascar, from tiny mouse lemurs up to the rare larger indri, which live around Andasibe in the east. And while not all of them are confident about using you as a climbing frame, most will happily check you out as you wander past looking almost as intrigued by us as we are by them.

Blending into the forest, the easiest way to spot them is by looking out for the ultra-sensitive fluffy tails hanging down from the branches, used to help them balance as they spring from tree to tree.

In the Nosy Be archipelago, on Nosy Komba – which translates as lemur island – you can be lucky enough to have the soft-furred common brown lemur and black lemur – aka eulemur fulvus and macaco macaco – spring right up to you.

Of course, while the famously cute primates get all the attention, they’re far from Madagascar’s only attraction. The island is roughly the same size as France, with everything from lush rainforest to archetypal tropical beaches with white sand, clear turquoise water and palm trees, as well as limestone rock formations that wouldn’t look out of place on the moon.

Isolated for millennia, after breaking off the coast of Africa, Madagascar is quite simply unique, with flora and fauna not found anywhere else in the world – it boasts 1,400 different types of orchid, as well as seven of the world’s eight species of baobab tree, six unique to the island. It’s also home to around half the 150 or so species of chameleons currently discovered.

In the Tanihely marine reserve, another small island near Nosy Be, the stunning reefs are home to four different species of sea turtle, over 100 types of coral and an explosion of brightly coloured fish, all in the warm shallow water of the Indian Ocean. Meanwhile high up in the islet’s trees lives a colony of endangered flying foxes – and never too far away, watching us as we explored, were the inquisitive eyes of yet more lemurs.