In which Katie and Evan trek through the African rainforest in search of the elusive mountain gorillas. 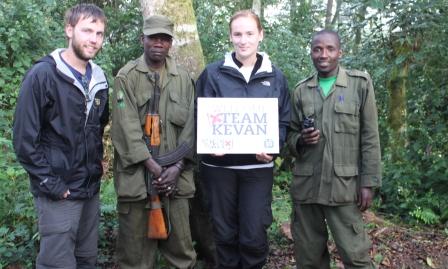 When we arrived at our campsite in Kampala, Uganda, I was feeling a bit off.  I had gone to the bathroom plenty that day and took every drug in the world to try and keep my stomach calm. I wasn’t dying or anything, but I was determined to feel better for our next day when we drove out to Lake Bunyoni. I tried my best to keep it a secret from our guide because the day after our arrival at camp we were due to trek out to see the gorillas, and you’re not supposed to visit the gorilla family if you are sick. I knew it was just something I ate, but still I didn’t want to be climbing up the mountain and have to use the shovel every ten minutes. By the time we made it to the camp I was feeling much better and very relieved that I was going to be able to trek. At Lake Bunyoni, Evan and I opted for a tree house upgrade overlooking the lake solely because we knew that it was really important to have a good night’s sleep before trekking. We had heard horror stories of it possibly taking the entire day to find the gorilla family. We wanted to be full of energy and for as low as thirteen dollars a night, I thought the upgrade was a steal.

When we found out we won the trip, we dreamed of doing the gorilla trek but there was no way we could save up in time to be able to do it. I believe it was less than a week before departure when we found out from the fabulous On the Go team that we were indeed going to be hanging out with gorillas in the rainforest. The night before the trek, I felt like a little kid before Christmas morning. I was so excited to be doing it but also extremely nervous that my lard ass wouldn’t make it through the rainforest. 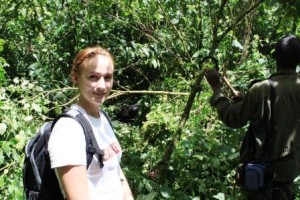 The game plan for the day was to split off into two groups. There were ten of us signed up to do the trek and because Evan and I are a couple it was easy for us to go off and join another group of six and our remaining group of eight stay together. To our surprise, we were told at the morning briefing, we were the only two in our group. I was relieved though: like I’ve mentioned before in the Mt. Sinai blog, I don’t like to be rushed. I really am very out of shape and my worst fear was that I would be holding up the group.

We had four guides for our trek, two of which headed off ahead us to try and locate the gorillas and then radio back to the other two guides and tell them which direction we should be heading. The head guide introduced himself as Godfrey and the other guide we just referred to as “the man with the gun” because he didn’t speak English and did not introduce himself. Although we couldn’t speak to him, we felt the need to be extra nice to him because he was armed. We gave him cookies.

The trek started out reasonably easily with a descent down a mountain and through the local farmyards. The view was absolutely breathtaking because we were there for the sunrise and the fog was just hovering below the mountains. It was a little chilly in the beginning but once we made it down the mountain and across the river into the rainforest the heat really got to me. I was almost ready to strip down naked, but unfortunately we had to be clothed due to all the stinging nettle. We were also told ahead of time to wear long pants and tuck them into our socks because of the leeches. The only socks I had that were long enough to tuck my pants into were my winter socks from Russia; let me tell you my feet were toasty! There were no paths and the forest was really thick. As Godfrey was leading us up the mountain I was already starting to feel out of breath and my legs started to feel like JELL-O but every time I looked up to tell Godfrey I need a second I would see Barack Obama smiling down on my telling me “Yes we can find those gorillas!” I am almost positive it was part of the Ugandan Wildlife Authority’s uniform to have a Barack Obama backpack because everyone had one.

It took us what seemed like forever to get to the top of this mountain with all my pit-stops for breath. I can’t really say how big this mountain was but let’s just say it was a close relative of Mt. Everest. When we reached the top Godfrey told us to be ready with our cameras because we were closing in on the family. I immediately pulled out the camera hoping one would just jump into my lap for a photo but we ended up having to trek all the way back down the other side of the mountain we had just climbed. 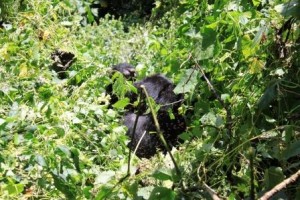 In our briefing we were told that if the gorillas charge us we were not to run but when we came across our first member of the family, I may have forgotten the rules. The first one we saw happened to be big Papa the silverback and when we interrupted his leaf munching he turned around and took a few steps gesturing to me “You want some of this?” It scared the living daylights out of me and I instantly turned around and ran faster than a Kenyan at the Olympics right into the man with the gun! Needless to say I stopped dead in my tracks…