Egypt’s Abu Simbel temple is a fascinating structure. Built as a gigantic tribute to King Ramses II, the temple of Abu Simbel was carved into the mountainside in the 13th century BC in a demonstration of the Pharaoh’s power and authority. With four imposing statues of the ancient king standing guard outside, the temple is adorned with hieroglyphs depicting the Pharaoh’s victory at the battle of Kadesh. Along with the nearby temple to his queen Nefertari, the two temples represent a stunning feat of engineering for the sheer fact that they’re carved entirely out of a mountainside. But on two days of the year, the Pharaoh’s temple is the scene of a far more impressive event. 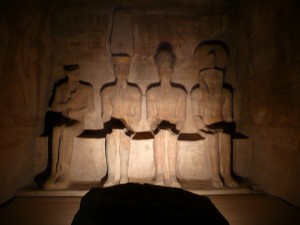 Ramses II had his temple carved out of a mountainside, but he had it done in such a way that – on the days of his coronation and his birthday respectively – the rays of the rising sun beamed directly into the inner sanctum, illuminating the statues within.

In the early 1960s, the waters of the Aswan High Dam threatened to submerge the temple forever, and authorities relocated the temple in a multi-million dollar project. Piece by piece, skilled engineers shifted the temple from its original position, carefully depositing the temple in its present location to avoid the rising waters. However, the relocation of the temple (along with the drift of the Tropic of Cancer) means that the inner sanctum is now illuminated on the 22nd of October and the 22nd of February, instead of the 21st of October and February as it was 3280 years ago. Nonetheless, it’s an incredible time to witness one of the ancient world’s most spectacular monuments.

It’s also the ideal opportunity to turn that cell-phone off, put the camera down for a second and marvel at the man’s legacy. Ramses and his empire may be long gone, but he certainly made his mark on the world. Is there anyone you can think of whose impression will be left on the world in such a profound and impressive way? In 3000 years, what we they look back to in our time and marvel at?