Katie Powell won our Get Rid Of Me competition last year, and recently completed her 6 month round-the-world adventure. Read about her adventures in Zanzibar on her 57-day Great African Expedition.

Prior to winning this grand adventure, I had only been to China and Las Vegas a few times – I had never had a beach holiday before. My family opts to go to Hawaii every year and I always volunteer to babysit the dogs, eat their food and use their gas. Sounds great I know, and I thought it was a win-win for everyone. Except now I am not fooled. They can put those dumb dogs in a kennel and bring me along to soak up the sun, hunt for sea shells and do nothing. The gorgeous white sandy beaches of Zanzibar have opened my eyes to a whole new world of travel, and made the perfect interlude on our 57-day overland trek from Kenya to Cape Town.

To get to Zanzibar we had to leave Dar es Salaam early in the morning to catch two ferries.  The first took us to the mainland and the other was the three-hour ferry to Zanzibar. As a group we decided to pitch in a little extra for the faster ferry so we had more time to enjoy the island. When we arrived, I was instantly in love. The water was a radiant shade of blue and the sun was shining. We were warned that the group who was there just before us experienced rain the entire time, but we were lucky enough to have great weather while we were there.

Stone Town was really interesting – I loved the Middle Eastern vibe it had to it and how much there was to explore. There were lots of little streets full of shops, and plenty of restaurants to sit and enjoy a drink on the beach. For our day in Stone Town we signed up for two of the optional excursions. We did the Spice Tour and a snorkelling trip out to Prison Island. For our Spice Tour we had a guide who was hilarious. He had his very own strange accent that was a giant mix of English/Australian/American/Asian. Seriously, any accent you can think of this guy busted it out during our tour. It was very entertaining to listen to him ramble on and on switching from one nationality to the next. For our tour he walked us to an old slave market, a basement where they kept slaves, and a church where they auctioned off slaves. To conclude the tour we walked through a spice farm that had everything from cinnamon to ginger growing there. The following morning we woke up early for our snorkelling trip to Prison Island where we met a giant tortoise that was a hundred and eighty-four years old. They were HUGE! It was fun to feed them and watch how happy they got when you gave their neck a good rub. 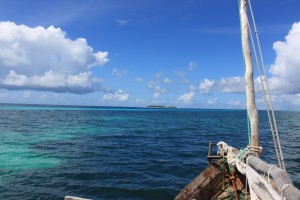 After our snorkelling trip we made our way to where we would be spending the next four days in paradise. Where we were staying was pretty relaxed. Nowhere near as many shops as Stone Town and the options for restaurants was fairly limited. It was nice to not have to make any huge decisions about where to eat and drink. Our restaurant had good food and the bar was fully stocked. We couldn’t have asked for more but when we felt the need for something different it was a very short walk to go to another restaurant.

Since we really enjoyed our snorkelling tour in Stone Town we decided to sign up for another snorkelling day trip out on a Dhow boat that included a lunch. It was so relaxing to lie on the boat and soak up the sun. When we arrived at our snorkelling destination it was absolutely breathtaking – so secluded, as if we were in the middle of nowhere. The fish were gorgeous and the amount of time we had to swim around and enjoy the scenery was perfect. The best part of the day was when we returned to the beach at our hotel we found out it had been raining there the entire day, while we had had nothing but clear skies and sunshine. Lying on the beach, sipping cocktails, and doing absolutely nothing was amazing.  We even had a good night out where we went to a club on the beach. 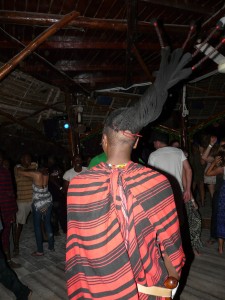 Warning to the ladies, if you find yourself in Zanzibar being convinced the man you’re talking to is a traditional Masai Warrior, don’t be fooled! It appeared to me that some of these men dress up like Masai to try to improve their chances with the ladies. On a side note, when they are dancing in the club be sure to wear some form of safety goggles – or keep a good look out – to avoid being hit in the eyes by their swinging long locks when they whip their hair back and forth. They have some dangerous dance moves!

After visiting Zanzibar it was back to Dar es Salaam before driving onward to Lake Malawi. See the full itinerary of our Great African Expedition here.

2 comments on “Rest, relaxation and zany dance moves in Zanzibar”