Southeast Asia is home to stunning natural wonders, mysterious archaeological sites, gleaming temples and bundles of fascinating history. The hardest decision when planning a visit to the region is deciding where to visit first so to help we’ve compiled our selection of top spots across Vietnam, Laos, Cambodia and Burma. 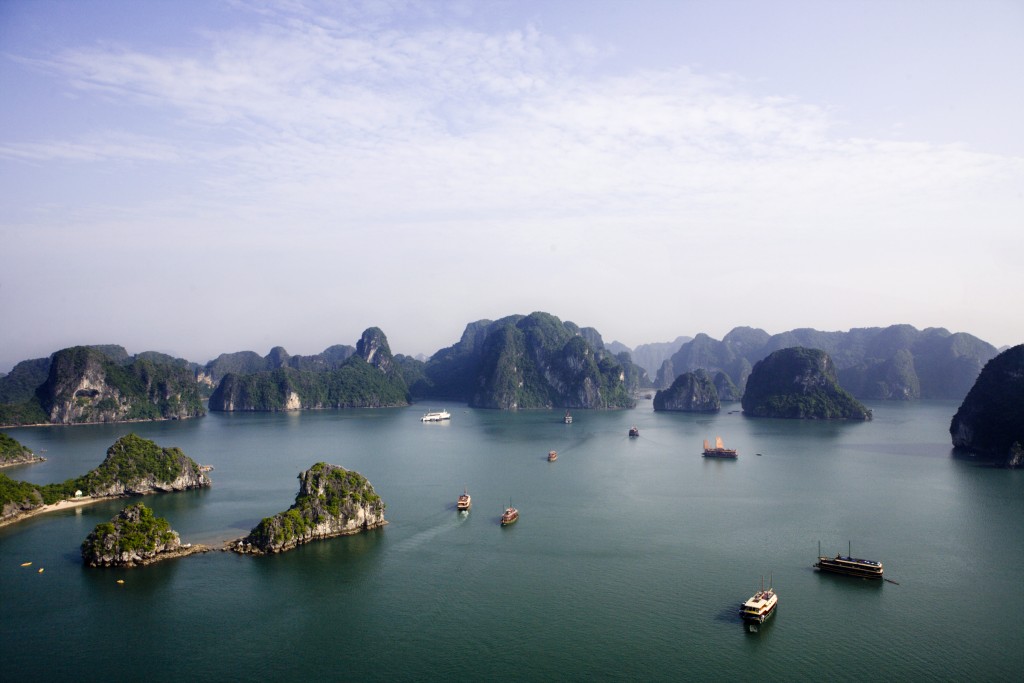 Vietnam’s Halong Bay is simply breathtaking, a UNESCO-listed World Heritage Site, widely considered to be one of the natural wonders of the world. Thousands of majestic limestone peaks rise dramatically out of the sparkling emerald waters, and on tiny islands, illuminated caves and picturesque hidden coves of all shapes and sizes await discovery. The towering peaks also provide some of the best rock climbing in south-east Asia. Take a cruise on a Junk and explore remote offshore islands, kayak and swim in the warm waters or peruse the floating markets. Top tip: Just northeast of Halong Bay is Bai Tu Long Bay, which is just as spectacular as neighbouring Halong, yet it remains refreshingly untouched by tourism.

The Cu Chi tunnels are a 250 km long underground maze which played a significant role during the Vietnam War, even acting as the base of operations during the Tet Offensive in 1968. The Viet-Cong were constantly expanding and repairing the network of tunnels which included living areas, weapon factories, field hospitals, kitchens and even a tiny cinema for down time.

Walk the bush trails with a guide and discover grass-covered trapdoors, the ingenious yet gruesome booby traps and hidden underwater entrances in rivers. There is also an opportunity to go underground and pop off a few rounds at the firing range.

A crucial transport and agricultural hub, the Mekong Delta is a hive of activity. Known as ‘the rice-bowl of Vietnam’, the region supplies most of the country’s rice, sugar cane, coconut and fruit. Along with its human inhabitants, the delta supports hundreds of species of birds and fish in its endless web of streams and canals. My Tho serves as the gateway to the Mekong, a town famous for its floating market. Experience the Mekong with day-trips from Ho Chi Minh City, overnight cruises or homestays in the Vinh Long region.

Angkor Wat is the world’s largest religious complex and Cambodia’s most well-known attraction. A breathtaking monument of devotion to the gods, Angkor Wat contains thousands of wall carvings and extensive bas-reliefs. With its picturesque riverside location, colonial and Chinese-style architecture and leafy tree lined boulevards, Siem Reap is an ideal base for exploration. Embracing its popularity, new hotels, restaurants and luxurious spas are springing up all over town. Just outside town, other attractions include lush countryside, silk farms, fishing villages and Ton Le Sap Lake – the largest lake in South East Asia.

With a charming riverfront style of life, Laos’ capital Vientiane is full of things to see. Delightfully friendly, and with a relaxed atmosphere that isn’t usually typical of a modern capital city, Vientiane’s temples, Buddhist monasteries, delicious cuisine and unusual sights are the keys to unlocking this city’s beauty.

Laos’ foremost city destination for visitors, Luang Prabang is a colourful and charming UNESCO Heritage listed city. French colonial architecture, eye-catching gilded temples and multiethnic locals add to the city’s aesthetic, and though it is a major confluence for trade between Thailand and China, some smart city planning has ensured that the sense of calm and tranquility that has drawn visitors here since the city first opened to travellers in 1989 remains intact.

A remarkable archaeological wonder, the Plain of Jars in the north-east of Laos is nonetheless somewhat puzzling. Thousands of stone jars dot the landscape, and with the discovery of human remains, ceramics and burial goods, The Plain of Jars is thought to be associated with Iron Age burial rites. Legend has it that a race of giants once lived in the area, and built the jars (some of which weigh up to 6 tonnes) to celebrate their victory, using the jars to store wine. Whichever story you prefer, the base for visiting this remarkable site is Phonvasan, the capital of Xieng Khouang province.

Scores of exotic Buddhist temples are scattered across a vast dusty plain making Bagan one of the most remarkable sights in Burma, if not all of south-east Asia. Sitting on the banks of the Ayeyarwaddy River, the temple-filled plain contains over 4400 temples, pagodas and stupas, rivalling the magnificent Angkor in Cambodia and dating back to the same period, almost 800 years ago. The shape and construction of each building is highly significant in Buddhism with each component part taking a spiritual meaning. Climbing to a temple lookout for sunset is an important part of the Bagan experience though it is best seen from a hot-air balloon at dawn.

Think we’ve left anything off the list? Let us know your top spots in Southeast Asia!