Skip to content
On The Go Tours Blog > News Tips and Trivia > The Inca Trail, The Lares Trek and the magic of Machu Picchu

One of South America’s most famous sights, Machu Picchu is probably one of the most recognisable places on the planet. But what’s the best way to get there?

Having escaped the fate of many other sacred places when much of South America was colonised by the Spanish, Machu Picchu is especially important as a cultural site. But its absence from the chronicles of the Spanish conquistadors leaves its real purpose open to speculation. Although local Quechua farmers knew about Machu Picchu, it wasn’t until a local farm boy led American explorer Hiram Bingham to the site in 1911 that it became known to the rest of the world. These days, it’s probably one of the most recognisable travel destinations, an icon of travel and definitely one of my personal top 5 places to see before I die. The Inca Trail and the Lares Trek are the two most popular trekking routes to Machu Picchu, so today I’ll be comparing the two and deciding which one I’ll take. 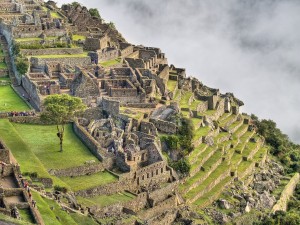 Probably the most famous of the routes to Machu Picchu, the Inca Trail is a 43km / 26 mile trek combining mountain scenery, sub-tropical jungle, cloud forest and an array of archaeological wonders left behind by the Incas.

Traversing the Andes mountains and reaching heights of over 5,000 m (16,500 feet) above sea level, the trails in this area connected the regions of the Inca empire from the northern provincial capital in Quito, down past the modern city of Santiago in the south.

Used to transport goods and relay messages, these trails were the highways of the Inca world. Without horses, which only arrived with the Spanish in the 16th century, or the wheel, which probably would have been more trouble than it was worth in the High Andes, the trails were almost exclusively trekked on foot, sometimes accompanied by that odd-looking South American stalwart, the llama.

By far the most popular of the Inca trails for trekking is the Capaq Nan trail, which leads from the village of Ollantaytambo to Machu Picchu. There are many well-preserved ruins along the way, and hundreds of thousands of tourists from around the world make the three- or four-day trek each year, accompanied by trekking guides. The legacy of Machu Picchu makes this one of the most sought after treks in the world. Numbers have been limited so that the site isn’t overrun with tourists, so if you are thinking of doing the Inca Trail make sure you book long in advance.

The Lares trek is an alternative to The Inca Trail, but is by no means second to it. With spectacular views, glacial lakes and hot springs, this less crowded option also ends with a full day’s visit to Machu Picchu. The Lares Trek reportedly reaches a higher altitude than the Inca Trail, and although there aren’t any Inca ruins on the way, visitors do get a chance to visit an Andean family, giving one great insight into life in the highlands. The final night includes a hotel stay in Aguas Calientes before catching a bus to Machu Picchu in time for sunrise. This means you’ll get to Machu Picchu before anyone on the Inca Trail, so it’s the perfect time to get great photos of the site as the sun rises over the mountains.

If you aren’t one for hiking, hang those boots up, hang out in Cuzco for a few days, and catch the train to up to Aguas Calientes before meeting up with the hikers at the ruins. It’s certainly a less strenuous option, but something about following in the footsteps of the Incas gets my feet itching.

The Lares Trek looks like the winner to me… What’s your preference? Have you been to Machu Picchu? How did you get there, and would you recommend it?