The Atlas Mountains of Morocco, with their lush valleys, snow-capped peaks and traditional Berber villages, form a stunning barrier between the country’s coast and the arid Sahara Desert. The three ranges provide not only excellent trekking and an escape from the madness of Marrakesh, but also some of the most spectacular mountain roads.

So buckle up! Our resident expert Amar Grover is about to reveal his adventures in Morocco’s Atlas Mountains. 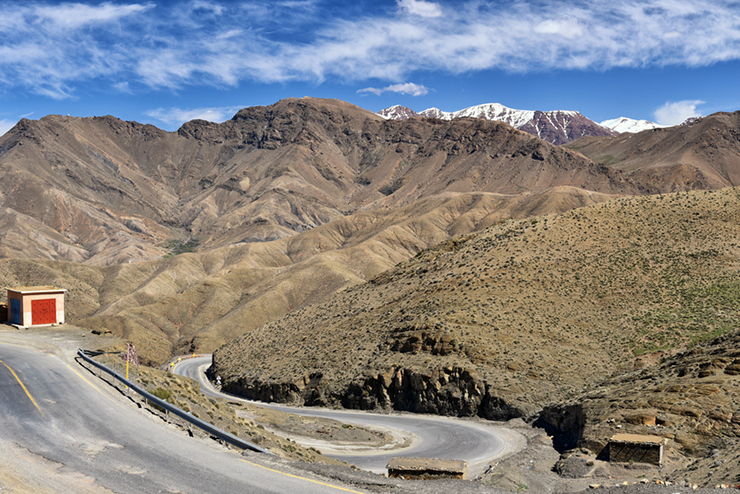 According to what I feel is the best guide to Morocco (OK, it’s the Rough Guide and I’m probably on my 8th edition of it now), the drive up to the Tizi n’ Test pass in the High Atlas Mountains “is not for the faint-hearted……some experience of mountain roads is advisable”.

I relish that overtly sombre way of saying: ‘It’s going to be a hell of a ride”. It was surely that nuanced combination of allure and adversity that got me out of bed at 3.30am one morning in 1986 to catch the daily bus over those mountains to Marrakech. I’d never before arisen that early for anything, or seen dawn fire the rugged High Atlas or driven over a 2092m pass. It was unforgettable.

In the late 1920s French colonials blasted a route through here, making what was a centuries-old mule trail into a motorable track. Since my first visit I have readily found an excuse to repeat the journey, most recently last April. These days I drive myself through Morocco (the Tizi n’ Test bus between Marrakech and Taroudannt has long ceased) usually with two young sons in tow. Call me selfish but as long as they’re not car-sick ‒ and believe me this road sorts the good from the gagging ‒ I reckon they ought to see how their parents really like to travel.

About thirty kilometres out of Marrakech, we began climbing through the High Atlas’ foothills. Faintly biblical-looking villages of flat-roofed houses and dazzling minarets dotted the landscape, their lush fields and orchards colonising parcels of land wedged into the tapering valley and side ravines. There were countless lovely viewpoints and a handful of one-street hill towns where you can stay simply and walk well.

We finally paused at Tin Mal, a hamlet just beyond the village of Ijoukak. On the left bank of the river atop a knoll stands Tin Mal mosque, its plaster-brown walls blending with the stark hills rising above. Built in the 12th-century as part of a now-vanished fortified stronghold, it’s now more monument than functioning mosque. Partial restoration has revitalised the fantastic interplay of light and shadow that graces the brickwork of its numerous horse-shoe arches and pillars. Naturally the boys scampered about wildly, watched over by the mosque’s kindly guardian.

On we drove, the road winding ever higher past a handful of scanty hamlets until our car crested the pass. We paused again not here but a few minutes down on the sunnier, warmer southern side at a rudimentary café where you could see the road twisting and turning for many kilometres deep into the hazy Souss plain.

A local Berber weighed down with bags waited for a lift back towards Marrakech. Yet instead of standing earnestly by the road, he slumped in the café’s shade. I was puzzled. “Those who rush”, he said brightly in French, “well, they’re already dead.” His haunting words shadowed me as I drove ‒ slowly, cautiously ‒ to Taroudannt later that afternoon.

Amar Grover is a London-based writer and photographer. He has travelled through much of the Middle East and North Africa, Central Asia, China and Australia, yet it’s the Indian subcontinent  – from Chitral to Assam and Ladakh to Tamil Nadu – that repeatedly lures him back more than anywhere else. He likes hiking and is obsessed by Indian forts. Visit his website at www.pictographical.co.uk