Skip to content
On The Go Tours Blog > Festivals and Events > Festival spotlight – shake it in Sri Lanka!

Three of the most popular Sri Lankan festivals commemorate important events in Buddhism, and include Vesak Festival, Kandy Perahera and Duruthu Perahera festival. Find out more about these amazing festivals here.

Vesak Festival is one of the most important festivals in all of Buddhism, as it commemorates Buddha’s birth, his attainment of enlightenment and his passing into Nirvana. Vesak is mostly spent in thoughtful prayer and meditation, with Buddhist recitals and a procession taking place in the evening. Followers of the Buddhist faith gather at their temples before dawn on Vesak day, singing hymns and making simple symbolic offerings to their teachers. Devotees also make a special effort to bring happiness to those around them, and will make gifts of cash or service to charities and worthy causes. Devout Buddhists also provide free refreshments and vegetarian food to those who visit the temple. It’s a colourful, joyous festival – every home will be displaying coloured lanterns which illuminate the towns and cities.

Kandy Perahera is one of the most famous of the Sri Lankan festivals, and takes place in the days leading up to the full moon in August. Legend has it that after the Buddha’s cremation, one of his teeth was brought to Sri Lanka – supposedly smuggled in the hair of an Orissan princess. Sri Lanka’s King Megavanna was so overjoyed to have a relic of such importance on the island that he paraded it through the city of Anuradhapura for everyone to see. The tooth was held in the custody of the king, and as the capital city shifted, so the tooth was moved with it. Eventually finding a resting place in the city of Kandy, the tooth now lies in the Dalada Maligawa (Palace of the Tooth Relic), and a replica – housed in a golden casket – is used for the festival.

A mighty elephant carries the casket through the streets, with revellers singing, dancing and performing devotional acts to the accompaniment of booming drums and the blowing of conch shells. Look out for acrobats, fire performers and hundreds of elephants in procession. Taking place over several nights, the loudest and most impressive procession takes place on the final night of the festival, with preparations for the following year’s festival beginning almost immediately! 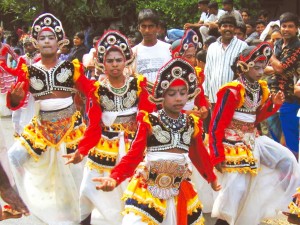 Duruthu Perahera is another Buddhist festival in Sri Lanka, celebrated at the Kelaniya Temple in Colombo, commemorating the anniversary of the Buddha’s first visit to Sri Lanka more than 2500 years ago. Three colourful processions take place, with drummers, dancers, musicians and actors all dressed in white as they parade through the streets. The most lively of the parades and the climax of the event is the Randoli Perahera, held on the day prior to the January full moon.

If you’re taking a tour to Sri Lanka, be sure to time it to coincide with one of these incredible festivals, and gain real insight into the rich cultural heritage of Sri Lanka. Visit our website for more information on Festival tours.

One comment on “Festival spotlight – shake it in Sri Lanka!”