Skip to content
On The Go Tours Blog > Festivals and Events > A Quick Guide to Duruthu Perahera Festival in Colombo
(Last Updated On: April 3, 2019)

Just over 100km from the southern tip of India, Sri Lanka has a rich and diverse culture that is most in evidence during the island’s festivals.  The country is enjoying a huge surge in tourism following the end of the civil war in 2009 – it is comparatively safe, and very welcoming but remains thrillingly different and exotic. 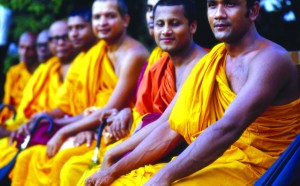 Sri Lanka’s capital Colombo is an ideal place to start a trip to the country if you are looking to spend a couple of days acclimatising to the country and climate. Skyscrapers share the skyline with ancient temples and colonial era buildings in a city that is not exactly beautiful – but certainly exciting.

The old colonial city is Colombo’s main historic centre, and is situated in and around the fort district. The district itself was heavily bombed by the Tamil Tigers during the 26-year Sri Lankan Civil War, and is only starting to return to normality.

The stunning Galle Face Green sits close to the shoreline giving beautiful views out over the Indian Ocean. If you travel south of the green along the Galle Road you will reach the heart of the city, home to some of Colombo’s best restaurants, bars and shops.

The Duruthu Perahera festival, held every January, has celebrated the anniversary of the Buddha’s first visit to Sri Lanka for more than 2,500 years.

The main focus of the festival is in the Colombo suburb of Kelaniya, home to the Raja Maha Vihara temple. The temple itself has had a tumultuous history having been destroyed and rebuilt a number of times following Indian and Portuguese invasions.

The procession of Buddhist relics around the Raja Maha Vihara is an amazing spectacle with drummers, dancers, musicians and elephants all playing an integral role in the celebrations.

Perhaps the highlight of the festival is the three colourful parades (peraheras) which are staged throughout the event, all more progressively colourful and vibrant than the last. The Raja Maha Vihara temple itself is decorated in a sea of lights, which create a wonderfully festive glow that helps to create a stunning backdrop to the evening peraheras.

Curry, with a side portion of rice is the staple dish in Sri Lanka and tastes are closer  to South East Asian than Indian cuisine. A mix of spices, chillies and coconut form the base of a good Sri Lankan curry, with locals preferring something that gives a fiery kick.

Holidaymakers often enjoy a beer of an evening and why not. On this island there are many excellent lagers to be had. Those wanting a real flavour of Sri Lanka should consider local brands such as Olé, Lion and Elephant, who also offer an eclectic range of colonial style soft drinks including ginger beer and cream soda.

Learn more about the festivals and cultural delights of Sri Lanka on our group tours.