Africa has some of the most beautiful and fascinating animals in the world. Nowhere else can you see such a diverse amount of wildlife in one place. From the famous ‘Big 5’ (lion, leopard, elephant, rhino and buffalo) to the weird and wonderful giraffes, zebras and wildebeests – Africa has it all! Not forgetting the vast amount of antelope from the tiny Dik Dik to the largest antelope in the world, the Eland. Africa is a wildlife enthusiasts absolute paradise. Having been fortunate enough to spend over a year in Africa – here Ann Amies tell us her top 10 (ok well 11 really) favourite African animals!

What animals have you spotted on safari, and which were your favourites?

Quite possibly one of the hardest of the Big 5 to spot but certainly in my opinion the most beautiful. I’ve personally seen them in the Serengeti and Lake Nakuru National Park. FUN FACT: Leopards don’t have spots – but rosettes – so that’s why they can’t change them. 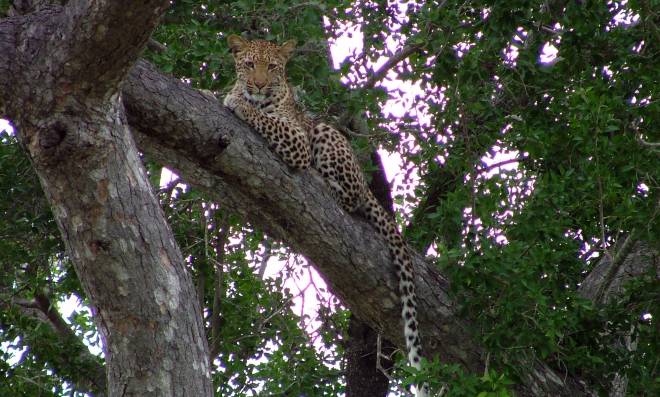 The much loved elephant is often seen in great numbers all over the continent. I’ve personally seen them in most National Parks we visit (except Nakuru where they don’t live). FUN FACT: The Elephant’s closest living relative is strangely the Rock Hyrax (Dassie) due to the similar gestation period compared to size, a similar skull shape and internal testicles! 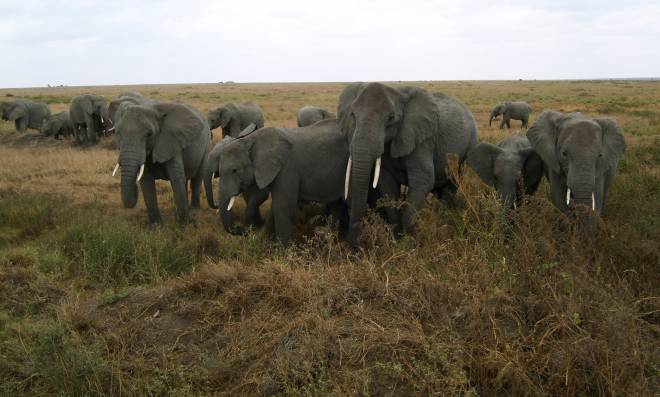 Without doubt this is the animal most people visit Africa in order to see. I’ve seen them all over Africa including the Masai Mara, the Serengeti, Etosha, Lake Nakuru and Chobe National Parks. FUN FACT: Lionesses are the ones that do all the hunting and let the males and cubs eat first – bit like at home! 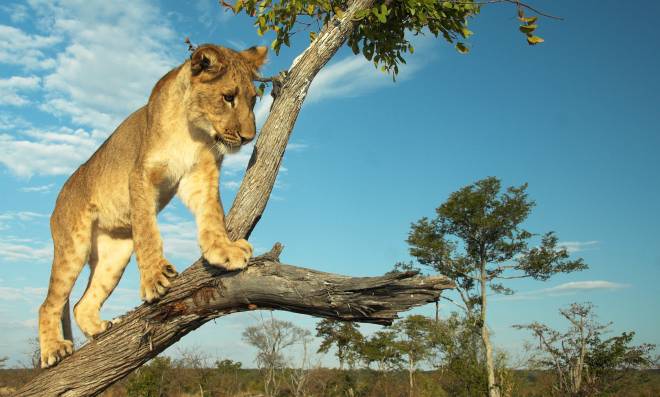 There are two types of rhino, black and white. The black being the rarer and harder to find. I’ve been lucky enough to spot them in Lake Nakuru, the Serengeti and Etosha National Park. FUN FACT: The white rhino gets its name from “weit” the Dutch/Arfikaans for wide (due to its wide mouth). The other is called black just to differentiate – nothing to do with colour! 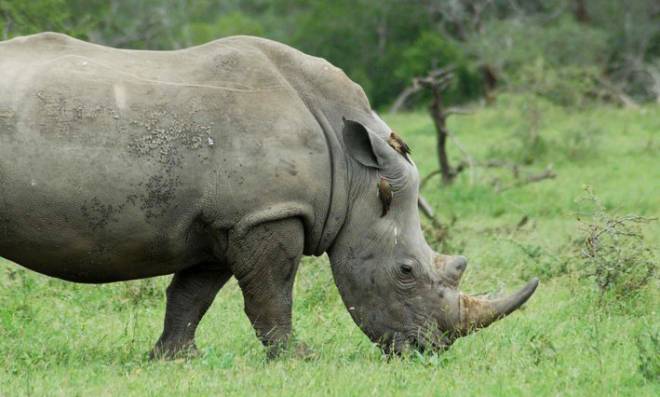 Probably the least of the big 5 to get people excited, but not to be overlooked. The only wild type of cattle on earth that are seen all over the continent. (Not resident in Etosha). FUN FACT: A buffalo never forgets! Some buffalo have been known to attack hunters/poachers who have harmed them in the past. 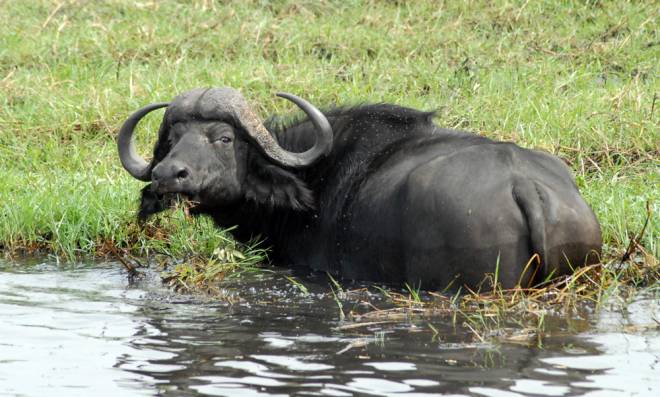 Made famous by Pumba in the Lion King – the warthog closely resembles the domestic pig – just with horns! Frequently seen in East and Southern Africa – some have even been spotted walking down the street in town in Botswana. FUN FACT: Warthogs often eat on their knees due to their short neck and relatively long legs! 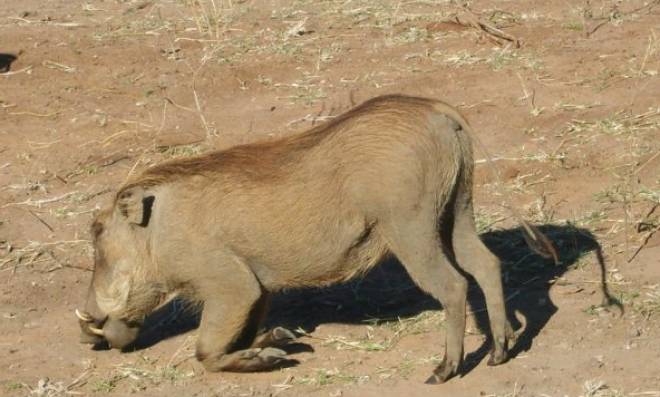 To some this is just another antelope, however these graceful animals are quick, agile and able to jump very high. Found all over the continent, however the black-faced variety is mainly seen in Etosha. FUN FACT: Impala give birth around 7 months after the rainy season, however if conditions are harsh they can delay the birth for up to a month! 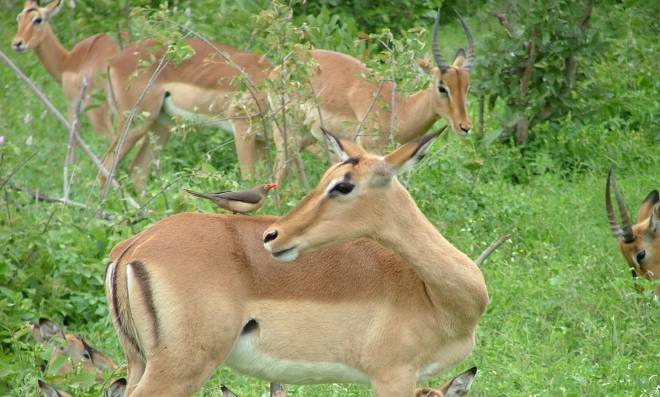 Africa’s tallest mammals! The giraffe is always a favourite when on safari and the different types are seen up and down the continent. FUN FACT: Giraffes give birth standing up – so when the calf comes out it drops to the ground – ouch! 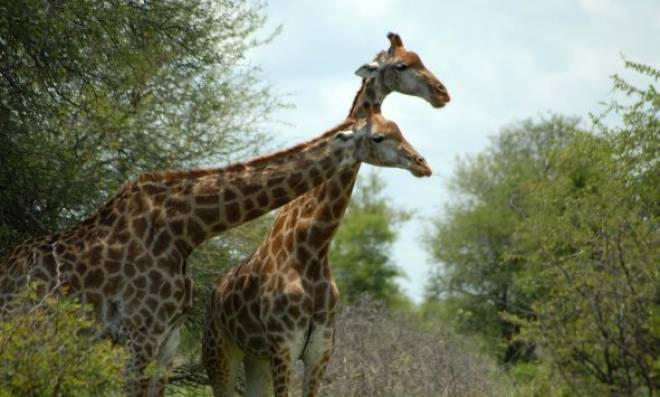 Often spotted together the pair of animals have a very close relationship. Seen together in most National Parks we visit. FUN FACT: Zebra and Wildebeest forge alliances due to the Zebra’s good eyesight (and poor smell) and the Wildebeest’s great sense of smell (but poor eyesight). 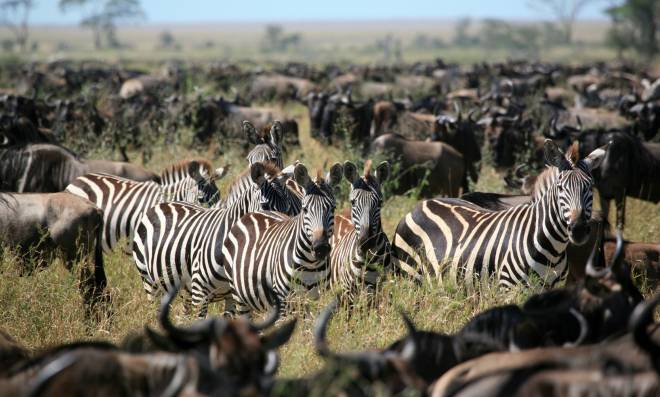 Probably the most majestic of all the antelopes and a beauty to watch. Most commonly spotted in Namib Nauklauft and Etosha National Parks. FUN FACT: Being a desert dweller the Oryx gets its liquid intake from fruits and vegetables it finds rather than a fresh water source. 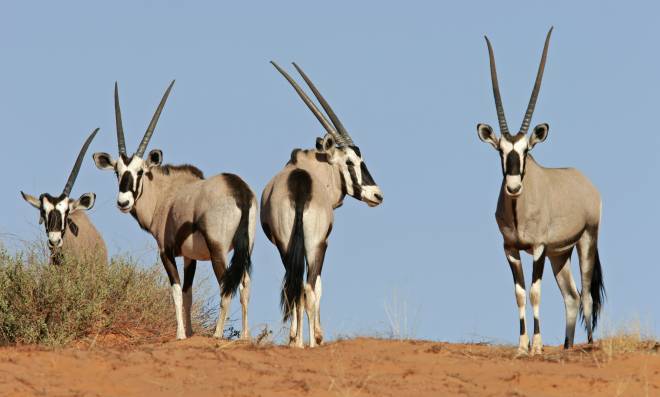