Every year Rio de Janeiro is home to the mother of all carnivals, when the streets of the city erupt into a vibrant display of colour as thousands of people flock to join the celebration. Now in full swing, here is what you are missing out on at Rio Carnival…

An annual extravaganza of colour and sound, Rio Carnival is perhaps the world’s most famous carnival, and certainly one of its biggest. Held every year just before Lent, it is a time to sing, dance, party and have fun whilst immersing yourself in true Brazilian spirit.

Carnival celebrations in Brazil began in 1723 when Portuguese settlers introduced informal parties. Thankfully, these celebrations have moved beyond the throwing of water and mud and inevitable street brawling! By the early 20th century, samba had emerged as a unifying cultural force. Inherently Brazilian, this dance and musical style has its roots in Rio and has become an icon of Brazilian identity. 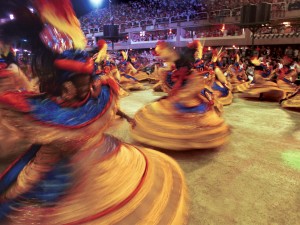 A major highlight of the carnival is the spectacular Samba Parade where different samba schools battle it out to win the hearts and minds of the audience and the judges. Fabulous floats cruise along whilst dancers dressed in sensational costumes samba their way through the streets to the infectious rhythm of the percussion bands. The most extravagant parades take place on Sunday and Monday night of the carnival whilst outside of the parade ground, free street pageants and block parties revel from dusk till dawn.

Rio Carnival is a spectacular event that everyone should see at least once in their lifetime. All the main avenues of the city are colourfully lit and full of people wearing fancy dress. Bandstands are erected on street corners and residents dance samba dusk till dawn. Free street parties, also known as carnavalescos or blocos can be found everywhere, with local people dancing, drumming and singing late into the night.

A variety of themed fancy-dress carnival balls are also on offer, which are a lot of fun and become more wild and raunchy as the night goes by! Fuelling the party is Brazil’s unofficial national drink the caipirinha, a delicious concoction of cachaça with crushed lime, sugar and ice).

Get your groove on and join the festivities of Rio Carnival with us next year.