“I have to begin by admitting that Africa was not a high priority on my travel list”, says travel agent Simon Pacey. “It was the kind of trip I was happy to put off until much later in life. Was I ever mistaken! After experiencing just a small portion of this incredibly beautiful continent, my perspective shifted and I departed having completely fallen in love with the wild beauty that is Africa…”

Arriving into Victoria Falls, the tour began with a bang. There was a tangible build up as we stood in line to get our visas, and once through our tour leaders directed us to our transfer and the adventure had begun. Night one was a nice easy start with dinner, drinks and a traditional African tribal drum performance. The rhythmic beats and tribal dance setting the scene, as the realization of being in Africa started to sink in. From here on in, the love affair began! 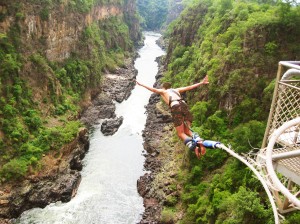 Day One was an over the top rush of adrenaline, wildlife encounters, stunning beauty, and celebration. Some of the group went off on an elephant safari, others opted for a relaxed morning, while myself and two other daredevils opted for the Highwire Adrenaline Adventure. First up was the flying fox, a cable wire stretched 150m above the river, splitting the Batoka Gorge. You run and jump off the platform and “fly” across the gorge, taking in the incredible beauty of the canyon that has been carved out by the Zambezi river. Next up was the zip line, followed by the ultimate Bridge Swing. Similar to bungee jumping, instead of up and down, you free fall and the line tightens and swings you back and forth. I opted for the handstand start and watching the river fast approaching as I plummeted head first got the ol’ blood pumper working overtime. The breath taking scenery amplified by the near death experience enough to leave you weak in the knees. Afterwards we all practically floated onto our next excursion with much hollering and high-fiving!
At this point, it was only 10am with the whole day still ahead. We went from one death-defying experience to another as the majority of us opted to walk with lions. And it is exactly how it sounds. ALERT is an organization trying to conserve and protect lions throughout Africa. Part of their fundraising comes from this particular day tour. There you are, side by side with two, eighteen month old lionesses. Walking in stride, you see first hand why they are considered the ‘King of the Beasts”. Pure power and grace. When your hand gently lands on their hind quarters, there is a real sense of awe as you feel their strength and agility, all perfectly evolved. From here, we were then onto the real show stopper, Victoria Falls itself. They span 1.7km across the Zambezi River, and throw up so much mist, there is a constant cloud rising up and a permanent rainbow in the gorge. This is why Vic Falls is known as “The Smoke that Thunders”. I could have easily spent the entire day wandering around this natural wonder of the world, soaking in all its majestic glory. 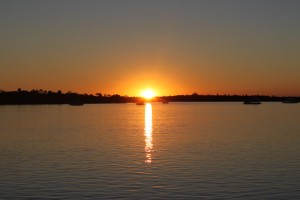 We were quickly on to the next adventure, a sunset cruise. An opportunity to be on the Zambezi is not to be missed. As the sun began to  set, the sky turns into a spectacular technicolor show. Hippos and crocodiles loitering on the banks adding to surreal atmosphere. The drinks may have contributed as well. After the sun went down, we were back at camp for dinner and then out to one of the bars nearby, Shoestrings. A backpacker hangout, attracting a mix of locals and travelers, all there for a good time. The night got away from us and next thing we realize, the truck is leaving in a few hours. Zimbabwe, over so quickly, but a lifetime of memories emblazoned in my heart. By far, day one would prove to be the most action-packed, but the rest of the trip would continue to amaze.