In the centre of Chengdu lies the People’s Park. An expanse of trees and open spaces for, as the name suggests, the people to enjoy. I took an afternoon stroll here, enjoying a pleasant relief from the incessant traffic and beeping of horns of the city in this spiritual haven for the city’s citizens.

The People’s Park was first opened in 1921 as the Little City Park, but changed its name in 1949. Its concept is not unique to Chengdu as most cities in China have a park like this and they are a fascinating place to go and witness everyday life. As soon as you have made your first few steps in the park you will come across a crowd of people, mainly of the older generation talking to each other looking at bits of paper and diligently jotting down information into their notebooks. This area is famous for its matchmaking and the paper notices that you will see are actually dating adverts! Parents and grandparents from around the city come here to ‘advertise’ their sons and daughters’ lonely hearts in the hopeful chance of finding a suitor. 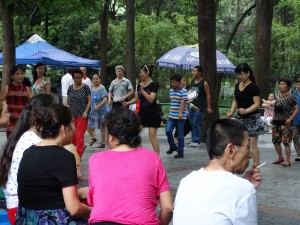 Continuing through the park your ears will be awoken by the sound of rather loud dance music. One would automatically assume that you were about to come across the youth of the city raving it up (and possibly trying to avoid their parents nearby trying to set them up!). But no, this is not the case as you’ll see large groups of people, mostly the older generation and predominantly women dancing around to this rather youthful music. While in most parts of the world this sort of music is frowned upon by elders as just chaotic noise played way too loudly by their children – the opposite is true in China, this is their music!

On your way out of the park you will pass by some tea houses. It is said that China is home to some of the best tea houses in the world, and Chengdu is perhaps one of the best cities to visit one of these traditional establishments. As you sit down you will notice groups of men and women sipping on tea, playing cards, Chinese chess and mah-jong. So why not order some delicious local green, jasmine or chrysanthemum tea and take it all in. Feel like a local and enjoy a truly relaxing afternoon.

Have you been to a People’s Park in China? Let us know your thoughts!