There could be something in the water or maybe it’s just a renewed sense of adventure, but one thing feels certain – Egypt is on its way back! Since the beginning of 2015 Pru Goudie has spoken to more and more people who are ready to return to the Land of the Pharaohs, so she decided to get in on the action and take a couple of journalist pals there to see for themselves!

Having just finished watching Levison Wood’s awesome documentary ‘Walking the Nile’ I felt a sense of real excitement in being with the Egyptian people again. It’s been a little while since I visited and I remembered fondly the friendly, cheeky tourist banter they were so renowned for! 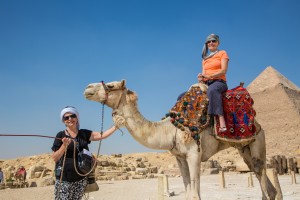 First up Cairo – this frenetic city hasn’t changed too much, it’s open 24/7 and if they could apply for a later licence they would! The deafening endless honking of horns, the chatter of the locals, the call to prayer and constant ‘Welcome to Egypt’ beckoning was a familiar and warm return.

But, where were all the foreign tourists? The sights were devoid of the usual tourist, but not empty! Instead I was amazed to find them full of Egyptians – both families and school groups, all rediscovering their history and restoring their National Pride. This was unlike any other visit I had experienced and upon questioning why this was our local guide Saleeb told us the government was actively encouraging the local Egyptian people to visit the sights at local rates – a new audience of tourist that’s for sure, and what a joyful sight!

After a whirlwind visit to see Zhoser’s step pyramid, the Pyramids of Giza and Sphinx – and I mean whirlwind, as we’d landed just after a great sand storm had rushed through Cairo – it was off to the local train station to catch the overnight train to Luxor. The train was busy and we settled into our adjoining twin cabins with a light dinner and some much needed refreshments and chugged our way through the night en route to Luxor. Eventually we pulled into Luxor – in time for a quick freshen up and then off to explore the Valley of the Kings. 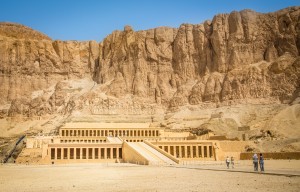 Strewn with tombs this eerie place is fully protected from any photography now, so cameras are strictly forbidden. We visited three tombs and then took the opportunity to purchase extra tickets to visit King Tutankhamen’s tomb where the four of us were able spend time alone with just the King Tut himself. His mummy lies in the tomb – although we were told that his mummy is one of the less well preserved mummies, as he was killed and mummified by non-professionals. Next up, the Temple of Hatshepsut, an impressive temple built for an even more impressive Queen.

Later that afternoon we wandered around Karnak Temple – the one we all agree was our absolute favourite!  This temple is the second most visited place in Egypt after the Pyramids of Giza and I can see why. It’s a sprawling open air museum and the largest ancient religious site in the world. It states its place in modern culture to having been used in the filming of Transformers: Revenge of the Fallen, James Bond movie The Spy Who Loved Me, The Mummy Returns and various other Hollywood movies.

Our time was coming to an end so last up was Luxor Temple, best viewed at sunset and the perfect ending to what had been a fast, furious but fantastic return to Egypt. If you are thinking of visiting this incredible country then my advice is to get there quickly whilst it’s still relatively quiet!

It’s excellent value for money and full of enthusiastic Egyptologist guides just waiting to welcome you back to their beloved country!