The only animal to inhibit the open ice of the Antarctic, emperor penguins face extreme weather of minus 60 winds and blizzards reaching 124 mph.  To survive these bitter and bleak climates, they have four layers of scale-like feathers. Standing at a metre tall when fully grown, their streamlined body helps towards their excellent swimming skills, gliding through the water and diving depths of up to 1,800 feet. To help insulate their bodies they store large amounts of fat which acts as a long-lasting energy source, vital for the male birds when they incubate the eggs for four months without eating. During this time the females venture out to sea to eat as much krill as they can, returning as the chick hatches.

The northern and southern elephant seals could not live in more differing climates. The northern elephant seal is found in the balmy waters of California while the southern in sub-zero Antarctica. Perhaps unsurprisingly due to their namesake, the males can grow to lengths of 20 feet and weigh up to 8,800 pounds. The female is smaller, at “only” 10 feet and 1,500 pounds. While they may look ungraceful as they move their large bodies across land, they are fantastic swimmers. Elephant seals can dive to depths of between 400 to 1,500 metres. They can even sleep underwater! They spend their winters in the water, coming onto land for the breeding season. During this time the males collect harems of 40 to 50 females and battle each other for dominance. This can be a terrifying site, with vicious fights often ending in bloody injuries. 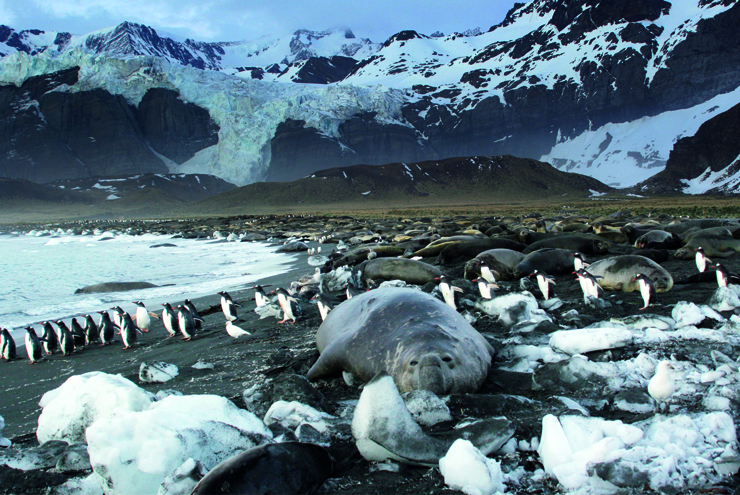 Named after the big cat due to the similar black-spotted coat, they also share this predator’s formidable hunting style. The leopard seal is on top of Antarctica’s food chain, eating penguins, fish and other seals. While they have an endearing appearance, with a fluffy coat as a baby, big round eyes and an upturned mouth giving the appearance of a playful smile, leopard seals are bold, fearless and powerful hunters. Their killing technique is efficient and skilled. The seal will patiently wait underwater to stealthily snare birds as they land on the water. Or it will swim up behind a penguin and use its powerful jaws to snatch it straight off the ice. Unlike elephant seals, who spend time together in colonies of up to a hundred, leopard seals are solitary animals. They come together only for breeding. Due to this reclusive behaviour, little is known about this intriguing creature.

The dazzling white of the albatross against a clear blue sky is a spectacular sight. In total, there are two dozen different species of albatross. But it is the wandering albatross that has the largest wingspan of any bird, at an average of 3.1 metres. Similar to the leopard seal, albatrosses are rarely seen on land, only landing to breed and skimming the water to eat their diet of squids, krill and fish. Previously they have been heavily hunted for their beautiful feathers, although sailors consider it bad luck to shoot or harm an albatross. Due to their part in the epic poem ‘The Rime of the Ancient Mariner’ by Samuel Taylor Coleridge, the birds have become legendary in maritime superstition and are used as an idiom when someone is heavily burdened with guilt.

Orcas are actually part of the dolphin family. They were given the name of killer whale by ancient sailors as they watched them hunt their prey in groups. A few whales join them in the icy waters throughout the year. One is the colossal blue whale, which heads to the polar region for feeding season and to eat 6% of their body weight in krill per day. Orcas have the most varied diet, eating seals, sea lions, fish, squids and seabirds. They are one of the world’s most powerful predators, hunting in pods of up to 40 animals and using their keen intelligence and skills to catch their prey, grabbing unsuspecting seals straight off the ice.

Travel on one of our Antarctica expedition cruises to see some of the wildlife of Antarctica for yourself. Or if you’re already lucky enough to have travelled to Antarctica, share your experiences in the comment section.

One comment on “The Wildlife of Antarctica (5 minute read)”