Petra is commonly known as the ‘Lost City’ but do you know why it was given that name? The archaeological site in Jordan is full of history and is the country’s most visited attraction and to help you get to know it a little better, here are our top ten facts about Petra. 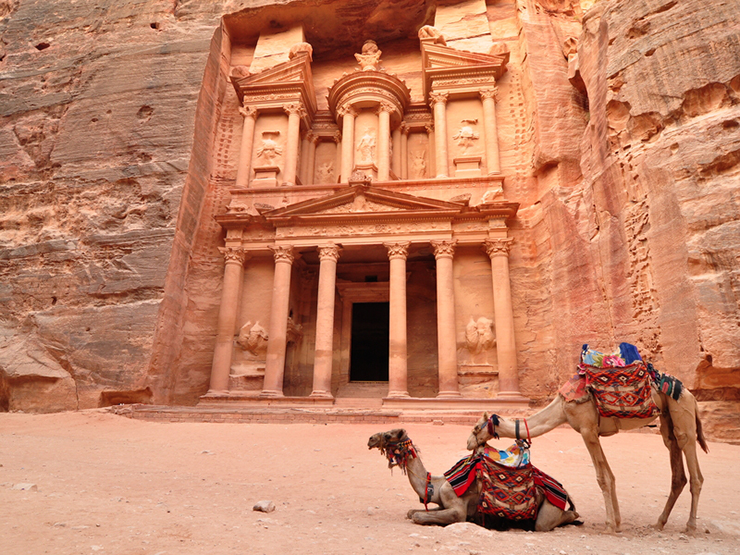 1. During the first centuries BC to AD, Petra is believed to have been home to 20,000 – 30,000 people and was an important trading city. It then sat uninhabited for over five centuries until rediscovered by a Swiss explorer in 1812, hence the name the ‘Lost City’.

2. The name Petra originates from the Greek word ‘petros’ meaning rocks. It is also known as Al-Batra in Arabic.

3. Although a desert, the Nabateans (inhabitants of Petra) were efficient water collectors and were even able to grow gardens in the area.

4. Petra became a UNESCO World Heritage Site in 1985 as well as one of the New Seven Wonders of the World in 2007.

5. Petra is also called the ‘Rose City’ due to the colour of its rocks, which take on a red-pink hue at sunset and sunrise.

6. The entrance to the city of Petra is by a narrow passage cut through the sandstone as a result of years of rain and wind. This passage is known as the ‘Siq’, which simply means ‘gorge’.

7. Between 1BC and 8AD Petra suffered severe earthquakes and in AD 363 it is believed about half of the city was destroyed. This led to raiding and theft of artefacts from the site.

8. Petra has been the location for a number of Hollywood films including Indiana Jones and The Mummy Returns. The site has also featured in TV programmes, music videos and even video games.

9. It is believed that Petra was established in 312 BC, making it one of the oldest cities in the world.

10. Using satellite imagery, in 2016 archaeologists discovered a large and previously unknown monumental structure buried beneath the sands of Petra.

Enjoyed our facts about Petra and want to see it for yourself? Browse our Jordan tours page for more information on this incredible site and to help plan your visit to the country.

One comment on “10 Interesting Facts About Petra (3 minute read)”