It’s the best-known train journey in the world. A bucket list favourite and world record-breaker. It traverses the entire length of Russia with routes that take you through Mongolia and China. Few other railway adventures can match what the Trans-Siberian has to offer. And as you’d expect from a journey that garners such accolades, it’s packed full of memorable experiences. From outdoor adventure across the seasons to surprising culinary delights, here we outline the highlights of the Trans-Siberian Railway. 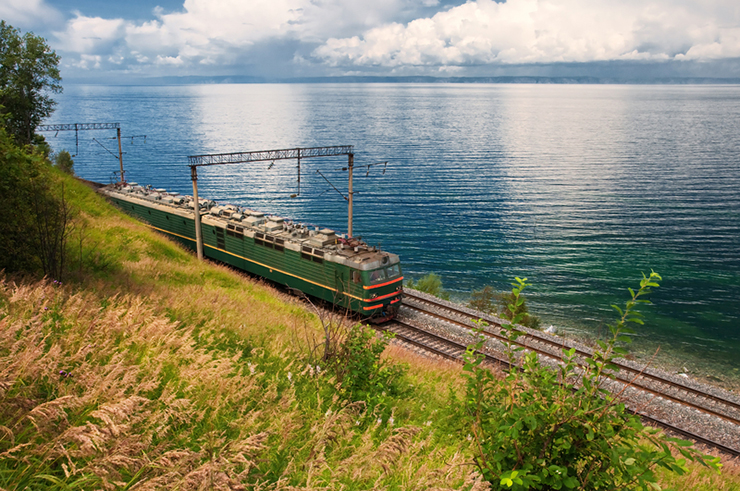 The journey from Moscow to Vladivostok (the official Trans-Siberian Railway) or Beijing (either the Trans-Mongolian or Trans-Manchurian, depending on the route) takes the best part of a week and covers, on average, 8,620km. That’s a staggering lot of land you’ll be covering. And, as you might expect, the landscape changes as you move from west to east (or vice versa), morphing from the urban landscapes around Moscow to the rolling fields of the Siberian countryside. The scenery is especially beautiful around Lake Baikal where the railway takes you right along side this stunning expanse of water. Think taiga and pine forests, and meadows brimming with wild flowers.

The Trans-Siberian services rarely move faster than 60kph so there’s no need to worry about blurred vision – you’ll have the liberty of taking it all in bit by bit. And whether or not you’re getting off the train, you’ll be spending a full few days in your carriage – that’s potentially 12 hours of scenic views, times seven. You’ll get a true sense of scale and realise just how big Russia really is. Sure, the platforms will quickly merge into one and you’ll see an awful lot of concrete in very Soviet-looking cities and industrial towns but this will be interspersed with glimpses of gleaming church spires and golden domes. 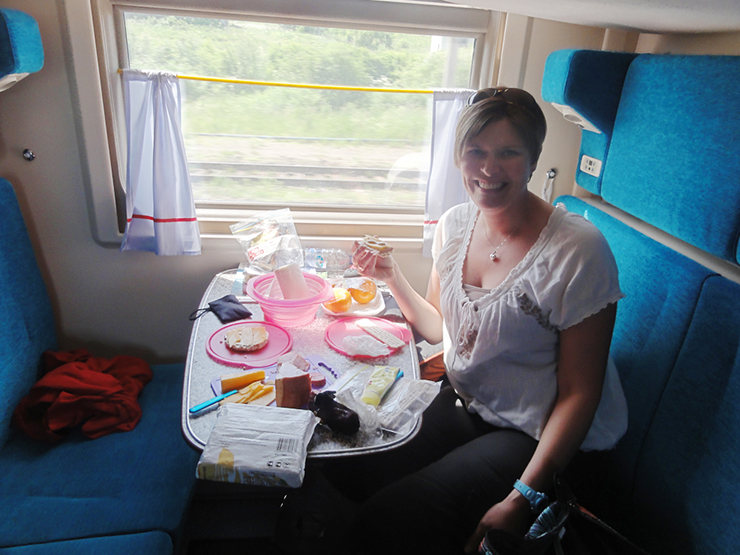 With so much time spent on the train itself, there’s no doubt that this is what the Trans-Siberian journey is all about. And this is part of its timeless appeal. Train travel has been romanticized throughout the centuries and writers have built their careers on doing just that. Unlike planes, you’ll see exactly where you’re travelling as you go. And unlike cars, what you’ll see won’t be endless motorways and service stations. On a train you can move around. You can catch up on a year’s worth of reading. It’s a chance to master a card game. Or even figure out what you’re actually doing with your life. Train travel is to daydreaming what vodka is to social bonding – one fuels the other (more on this later).

Time is definitely on your side here. It’s something you’ll have lots of and how you choose to spend that time is down to you. Though it’s definitely a good idea to bring distractions – an iPod loaded with music, a Kindle packed with books. And when the cabin fever sets in, go for a walk. There’s nothing stopping you from wandering down the train carriages, checking out what’s going on elsewhere. In all likelihood it will be nothing more exciting than Russian families wiling away their own time but you never know who you might encounter. 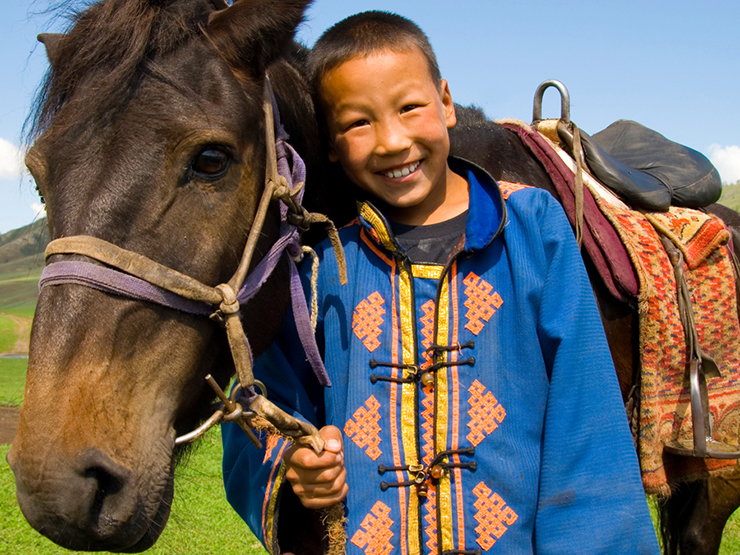 3. The people you meet

On the train you’ll be sharing with others – other travellers that hail from various countries around the world and locals travelling for business or to visit family. With hours to spare there will be plenty of opportunities for conversations with strangers. And don’t believe everything you hear about Russians – they can be friendly and highly talkative, happy to chat politics and keen to know what you think of their country. They’ll crack out their bottles of vodka to share around and will get talking with whatever English they possess. Have a shot (or two), chase with kvass – a fermented beverage made from rye bread, and snack on tinned meat and bread. Trust me, it’s more fun than it sounds.

There’s a particular type of person that could make or break your Trans-Siberian experience – the fabled provodnitsa. Each carriage has its own attendant, known in Russian as a ‘provodnitsa’. They check your tickets, keep the carriage clean and tidy, and keep passengers in line – that includes you. Working out how best to handle the provodnitsa is part of the fun. Too friendly and you’ll only annoy them. Rude or unappreciative and they might make your ride a living hell. If you can crack a smile out of one of them, consider yourself a very special person. 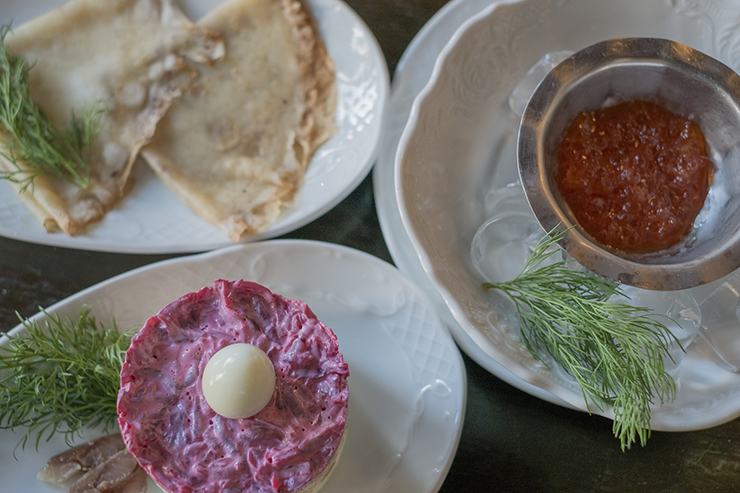 Yep, you read right – food. OK, I’ll admit that the food served in the train’s dining carriage is nothing short of mediocre. It’s overpriced and underwhelming. But elsewhere you’re in for a culinary treat. It may come as a surprise to you (it certainly did to me) but the food in Russia is actually rather good. Moscow is home to a number of world-class, international restaurants while cities along the route, including Yekaterinburg, have plenty of dining options specialising in local grub. Think flavoursome borscht, satisfying dumplings, pancakes and caviar, beetroot and herring salad, and cakes with honey and poppy seeds. And it’s surprisingly affordable. If you’re a bit of a foodie, it’s worth getting off the train just to sample Russian cuisine.

If you’re not planning on making any stops then fear not – there’s still the odd culinary delight to be found on the station platforms. Homely-looking babushkas attached to trolleys loaded with sweets and crispy snacks wait for hungry train travellers. But best of all, the odd one might also have a bag of pelmeni and you may just find that the best dumplings you’ve ever tasted were purchased from a one-woman canteen on a station platform for less than a dollar. 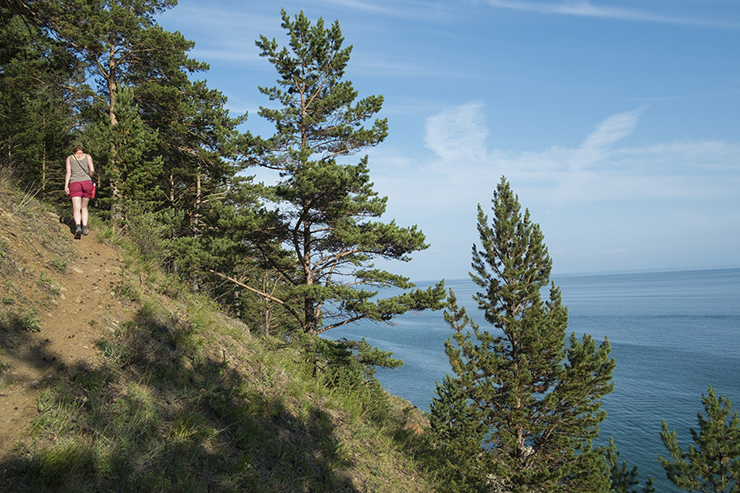 5. The chance for adventure

Sure, you can hop on the train at Moscow and get off a week later in Vladivostok or Beijing without stepping foot outside of a train station. But why would you want to do that when there’s so many great places to disembark at? Get off at Irkutsk and make your way to Lake Baikal, the world’s largest freshwater lake. In winter you can go cross-country skiing, ride huskies and go snow-mobiling. In summer you can take a scenic trek through the surrounding taiga forest and camp by the water’s edge.

If you’re travelling through Mongolia then break up the journey at Ulaan Bataar and set out for the countryside. The Terelj National Park is just an hour away from the capital. Here you can go on long walks, explore the landscape on horseback and spend a night or two in a traditional Mongolian ger (a large felt tent). You can also time your journey with the annual Nadaam Festival, a celebration of Mongolia’s traditional sports – wrestling, horse racing and archery. It’s held in July and is a real spectacle with an elaborate opening ceremony of acrobats and marching bands.

Ready to experience these highlights and more? Check out our range of Trans-Siberian Railway adventures.