Skip to content
On The Go Tours Blog > Our Adventures > Visiting Tuol Sleng: The Horrors of Cambodia’s Past

Visiting Tuol Sleng Genocide Museum in Phnom Penh is a profound experience. I visited the museum after the Killing Fields on our Saigon to Siem Reap tour. This makes for a sobering but necessary afternoon reflecting on the suffering of the Cambodian people during Pol Pot’s reign that unbelievably happened not too long ago. While Cambodia is full of many beautiful things – the archaeological sites, beaches, food and people to name a few, it also has a dark and tragic past.

Tuol Sleng is Cambodia’s most notorious prison and was a key part of Pol Pot’s terrifying regime. Pol Pot was a politician who led the communist movement of Khmer Rogue from 1963 till 1997, the year before his death. Khmer Rogue held power in Cambodia from 1975 to 1979. They worked towards creating a classless society, eliminating all social classes except for poor peasants who worked on the land. Along with the Killing Fields, Tuol Sleng serves as a testament to the horrific crimes that were carried out and is a memorial to those who tragically lost their lives.

A school was taken over and turned into an interrogation and torture chamber by Pol Pot’s security forces. It was called Security Prision 21 – S-21. Now the Tuol Sleng Genocide Museum, this was the venue for many horrific crimes. The numbers are hard to hear. During the four years the Khmer Rogue ruled Cambodia, two million people died from execution, starvation and disease. At least 12,000 people were tortured and imprisoned between 1975 and 1978 in S-21. Just 15 prisoners survived. While profound, a visit to Tuol Sleng is depressing and not advised for the squeamish. The former prison has been left very much in the same condition. The black and white photographs that were taken of every prisoner are on display. Some of the rooms contain a rusty bed frame while some have the instruments of torture. 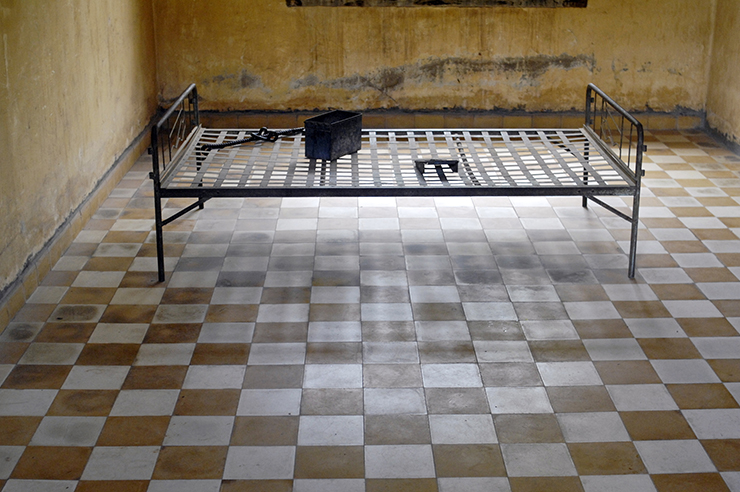 Living to tell the tale

Of the heart-breaking few who survived, some of them spend time in the museum to tell their stories. One survivor was a young boy during this horrific period of Cambodia’s past and came over to talk to us about his experience of his mother, his brother and himself being taken to the prison. It was a truly harrowing tale and the pain of his past often reduced him to tears. Another older gentleman shared his distressing past and how even today relatives who disappeared during this time remain unaccounted for.

It is unthinkable how people can be so destructive and inflict such terrible acts on innocent people. And what I found even more shocking is this all happened in my lifetime, not hundreds of years ago. I don’t remember hearing much about the genocide whilst it was happening, just the coverage of Pol Pot’s death in 1998. Even less reported on was the continued fighting and how Cambodia has struggled after the fall of the Khmer Rogue. However, Cambodian’s today talk positively of the future. Some of those who were responsible for the war crimes have been brought to justice. While the not too distant past hasn’t been forgotten, they are now going from strength to strength. To see how far their country has come from such devastation is wonderful and incredibly inspiring.

If you want to experience Cambodia’s history along with its attractions, consider one of our group tours.