Sigiriya, meaning Lion Rock, is quite literally a large rock with a lion carved into it and an ancient kingdom on top. It is found in the middle of Sri Lanka’s Cultural Triangle and is one of the most popular places to visit in the country. How much do you know about Sigiriya? We’ve collected ten fascinating facts about Sigiriya. 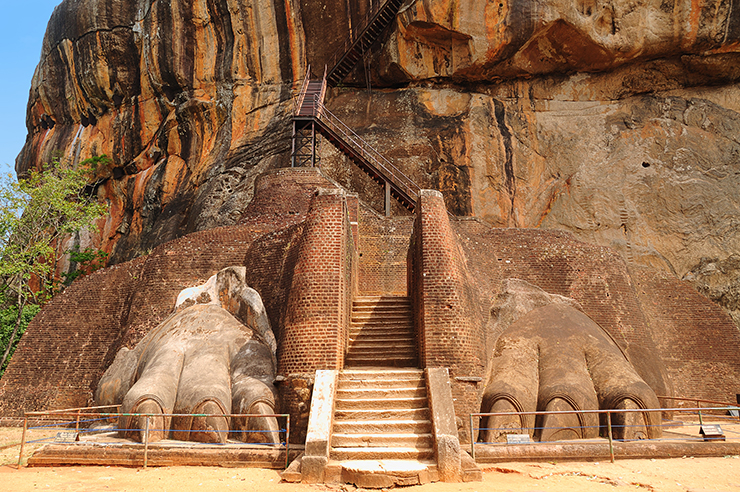 1. The citadel on top of Sigiriya was built by King Kasyapa who ruled from 477 to 495 CE. He choose this as his royal residence as he was worried of potential attacks from his brother Moggallana, the rightful heir to the throne. From atop of Sigiriya he had unobstructed views of the surrounding area.

2. The rock is 200 metres high and visitors can walk the 1,200 steps, divided amongst a number of staircases, to the top.

3. King Kasyapa’s life and rule was full of controversy. He was born to a non-royal concubine and had no right to the throne. Consequently he rebelled against his king father Dhatusena, imprisoning him and eventually having him killed, entombing him in a wall.

4. Prior to King Kasyapa using Sigiriya as his residence, it’s thought the rock was a Buddhist monastery. It was once again used as a monastery after Kasyapa’s death till it was abandoned in the 14th century.

5. On a plateau halfway up the rock Kasyapa built a gateway in the form of a huge lion with a staircase emerging from the lion’s mouth, hence its name meaning Lion Rock.

6. Considered one of the best examples of ancient urban planning, the site of Sigiriya became a UNESCO World Heritage Site in 1982.

7. King Kasyapa created a ‘mirror wall’ so highly polished that he could see his reflection as he walked by. There is also evidence of a wall, 140 metres long and 40 metres high, covered with paintings of ladies. These paintings are still partly visible today. Visitors inscribed their thoughts of the painted women along the ‘mirror wall’. This graffiti is of great interest to historians, showing the development of the Sinhala language and script.

9. It wasn’t until 1831 that the abandoned Sigiriya was discovered by British Army Major Jonathan Forbes. He came across the site whilst horseback riding through Sri Lanka. A few decades’ later archaeologists spent time on a research operation in the region.

Fancy climbing the 1,200 steps yourself to enjoy the stunning views from the top of Sigiriya? Have a browse of our Sri Lanka group tours.