Reykjavik has many wonderful things. Sophisticated architecture, stylish shops, beautiful nature and fascinating museums. It also has a reputation for being slightly pricey. However, it’s not difficult to spend a day getting well acquainted with the capital city without breaking the bank. To lend a helping hand we’ve done a bit of research for you, pulling together the top free things to do in Reykjavik.

Thanks to its small size, it’s easy to discover the city on foot and spare the cost of public transport – just make sure to bring your best walking shoes. Much of our selection is in close proximity to each other. If you start with number one and continue to five, it will take you an hour to walk from one stop to the next. An idyllic way to discover the city.

1. Relax on the beach of Nauthólsvík

A little corner of paradise in Reykjavik, the geothermal beach of Nauthólsvík opened in 2000. Seawalls were built to form a lagoon that combines cold sea water and hot geothermal water. The golden sand arc on the edge of the Atlantic was designed to be a diverse outdoor area, a place where people can enjoy sunbathing, swimming and sailing. Nauthólsvík has an appearance more reminiscent of the beaches of the Mediterranean than what you would expect to find in the world’s northernmost capital city.

The water is heated by geothermal activity all year round and reaches highs of 19°C during the summer. Only the brave would face the 4°C chill in the winter, with most sticking to the warmth of the hot-tub. For those who want an invigorating winter experience there is the option to swim in the chilly waters before making a quick dash back to the hot tub. There are changing rooms and showers which are free to use as well as a cafe selling drinks and snacks. 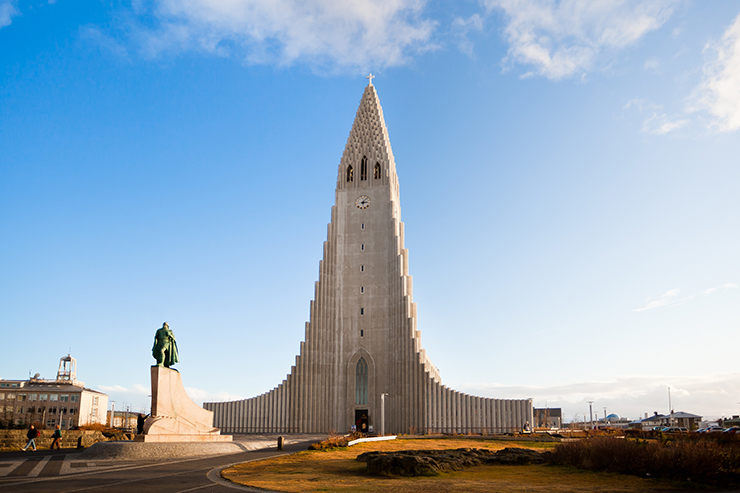 The church of Hallgrímskirkja is one of Iceland’s main landmarks. Standing proud on top of Skólavörðuholtið hill it can be seen throughout Reykjavik. The country’s landscapes of rocks, glaciers and mountains inspired the architect Guðjón Samúelsson when he was designing the church. The church bares a striking similarity to the basalt columns of Svartifoss waterfall in Vatnajokull National Park.

The focal point of the church, which is free to enter, is the organ. The colossal instrument reaches 15 metres high with 102 ranks, 72 stops and 5,275 pipes to make sure the organ has enough power to fill the church with dramatic music. You can pay to take the elevator to the top of the 73 metre tower for 360° views of Reykjavik. However the free views from outside the church are absolutely stunning and it’s one of the best places to view the city’s multi-coloured houses.

One of the museum’s goals is to cast as many of Jónsson’s sculptures in bronze and have them placed in the garden for everyone to enjoy. There are 26 sculptures in the garden showcasing his work and how he was strongly influenced by Greek mythology such as the Waves of the Ages which depicts the birth of Aphrodite and her ascension from heaven. The garden has been described by visitors as a lovely oasis to retreat to. 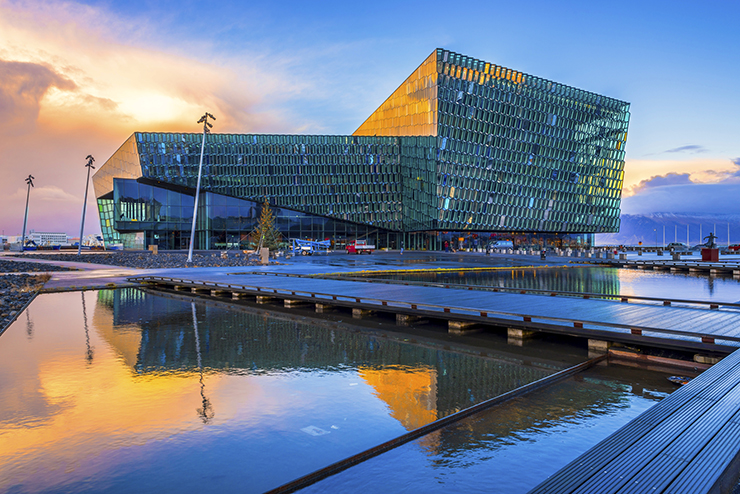 The Harpa Concert Hall is one of Iceland’s most distinguished landmarks and is the cultural heart of the city. Since opening in 2011 it has won numerous accolades and is home to the prestigious Icelandic Opera and the Iceland Symphony Orchestra. The breathtaking design was created by Olafur Eliasson who was also influenced by Iceland’s famous nature, this time the volcanic geology. While paying for a night at the opera is slightly extravagant, there is no charge to enter and explore.

The walls of multi-coloured glass panels arranged in a honeycomb structure are mesmerising. There isn’t a time of day when the building doesn’t look magical. Natural sunlight fills the interior of the building during the day and in the evening the glass reflects the colours of the setting sun. Although it’s easily argued night time is when it looks its best, the outside of the building coming alive with thousands of dazzling LED lights. Walking around the inside you get great views of Reykjavik including those of the traditional fishing boats in the old harbour. 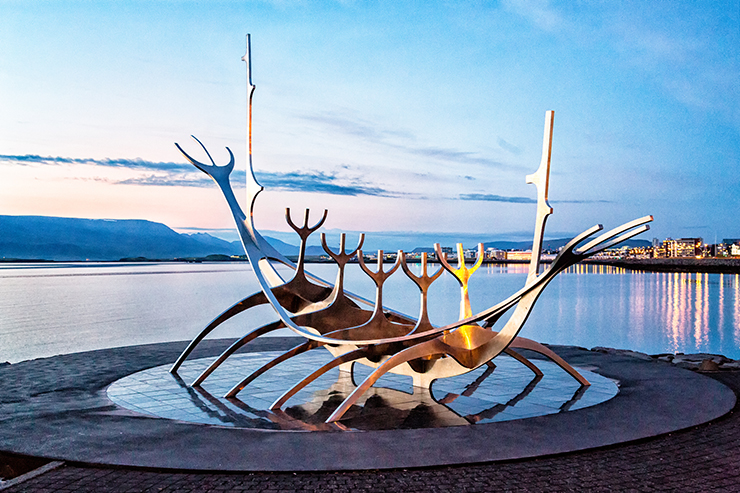 5. Marvel at the Sun Voyager

The Sun Voyager, also known as Sólfarið, is a steel sculpture found on Reykjavik’s waterfront. The striking sculpture was designed by Jón Gunnar Árnason but, tragically, it was finished and unveiled after his death. It’s a common misconception that the design of Sun Voyager is based on a Viking ship. You would be forgiven for thinking so given Iceland’s Viking history. However it was actually designed as a dreamboat and an ode to the sun.

The sculpture and the surrounding views of Mountain Esja and Faxaflói Bay are incredibly impressive. It’s an Instagram opportunity you don’t want to miss. It’s an extraordinary place to watch the sunrise and set. If you’re there during the summer, the sculpture looks even more dramatic and atmospheric during the Midnight Sun.

6. Explore the Valley of Elliðaárdalur

Elliðaárdalur is a hidden gem of Reykjavik, with comparisons to New York’s Central Park and London’s Hyde Park regularly made. While you could be easily mistaken for thinking this nature wonderland is on the outskirts of the city, this peaceful area is fact in the middle and is a great place to enjoy walking, cycling and birdwatching.

The Elliðaá river runs through the middle of the valley and is heaving with salmon, Arctic char and brown trout. For keen fishers, it’s possible to purchase a fishing license during the summer season, between the 1st June and the 31st August. However Elliðaárdalur is mostly perfect for those who want to appreciate beautiful nature without spending a penny.

7. Take a self-guided tour of the city’s street art

As with every creative and cosmopolitan city, Reykjavik has a captivating art scene. But you don’t have to pay an entrance fee into one of the museums to see the best artwork thanks to the street art. As with many places that has a burgeoning street art scene, the city has put a few restrictions in place over the years. Although in the case of Reykjavik, it has created a cleaner, more considerate style of graffiti.

Artists can now only work on the walls of their own property or ones where they’ve been commissioned by the owner. The results are diverse and imaginative with many of the murals telling intriguing and romantic stories. A quick Google search will give you a map of Reykjavik noted with the locations of the city’s best street art. This is an ideal route for you to wander through and discover the artwork at your own pace. 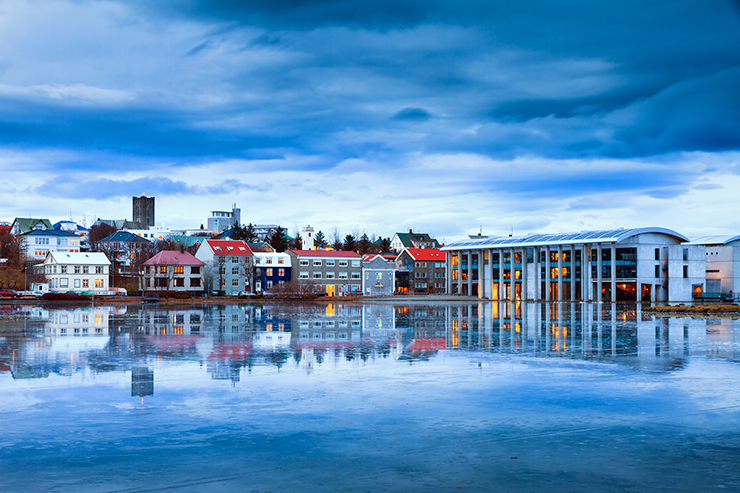 Reykjavik City Hall is found at the centre of the city along Lake Tjörnin. The bold, modern building was designed to attract bird-life to the lake with ducks, geese, swans and Arctic terns now flocking to Lake Tjörnin. When wandering around in spring or summer, make sure to grab a loaf of bread to share with the birds. If there during the frosty winter, take your skates as the locals transform it into an ice-skating rink.

Inside Reykjavik City Hall is a 3-D map of Iceland. It’s fascinating to look at either before or after your exploration of the island. The building also houses the Official Tourist Information Centre and regularly has different exhibitions from local Icelandic artists.

Iceland’s coolest and trendiest shops are spread out along one street in Reykjavik – Laugavegur. It would be very easy to spend a lot of money without much effort in these boutique stores. However, they’re a delight to browse through whether you’re splashing the cash or not.

The diverse selection of goods includes vintage gems found in Spúútnik, stylish kitchen utensils from Hrím and the latest fashion in Kiosk. For those who don’t have any trouble resisting temptation when window shopping, it’s a great way to spend an afternoon. Yet if you’re easily enticed and will have a credit card to hand, maybe give the street a wide berth. 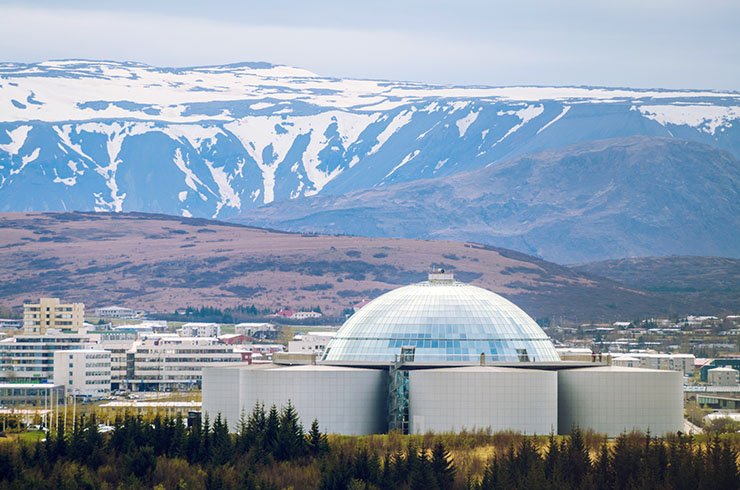 10. Look out over Reykjavik from Perlan

The Perlan, translated to English as the ‘Pearl’, is one of Reykjavik’s most unique and popular sites. It combines beauty and function. On top of the six tanks of geo-thermal hot water, is a glittering glass dome. Wrapped around this dome on the fourth floor is a free-to-visit viewing deck.

The viewing deck has panoramic telescopes at each of the six corners. From here you get beautiful views of Reykjavik as well as the neighbouring communities and the mountain ranges which encircle the city. On a clear day it is also possible to see Mount Snaefellsjokull.

Browse our selection of Iceland tours, which all start and end in Reykjavik to experience this capital city.