Helsinki is one of Scandinavia’s most popular destinations and the capital of Finland. For a small capital city, it certainly packs a punch – a quirky, relaxed, creative, stylish punch. However a visit here also has a reputation for giving your wallet a bit of a beating. Nevertheless, there are plenty of free things to do in Helsinki. It’s an easy city to conquer by foot, saving you money on public transport which can be spent on a revitalising coffee after all your explorations. And being the nation that drinks the most coffee, Finnish people know how to pour a good cup of coffee. Here is our selection of the top 10 free things to do in Helsinki. 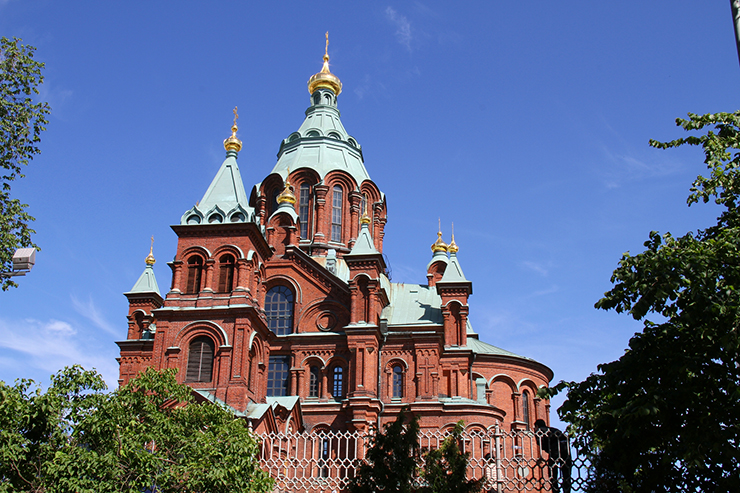 1. View the city from Uspenski Cathedral

A spectacular red-brick building, the Uspenski Cathedral can be seen from a distance. It’s a stunning part of Helsinki’s skyline. Set on top of a hill on Katajanokka island, you also get stunning views of the city from outside the cathedral. Taking in this famous building is one of the best free things to do in Helsinki.

The largest Orthodox Church in Western Europe, the Uspenski Cathedral shows Russia’s influence on Finland. Built in the Russian-Byzantine style, the green and gold onion-shaped domes resemble many of those found in churches in Moscow. The Orthodox style continues on the inside with an array of impressive chandeliers. The cathedral is also home to a number of religious icons. 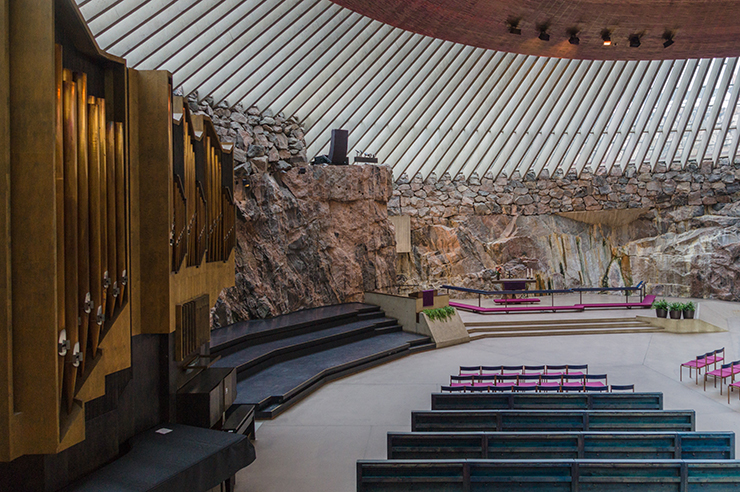 2. Marvel at the Temppeliaukio Church

The Temppeliaukio Church is an incredible example of modern architecture. Also know as Rock Church or Church in the Rock it’s one of the main attractions of Helsinki. In 1968, the architect brothers Timo and Tuomo Suomalainen excavated into a block of natural granite in the heart of the city. They transformed what was left into the unique church.

Natural light streams into the church through the skylight that surrounds the 22 diameter copper dome roof. The raw rock walls create excellent acoustics and the church is regularly used for concerts. However, first and foremost it’s a place of worship. This means it can be can closed for various events, so it’s always best to check beforehand. 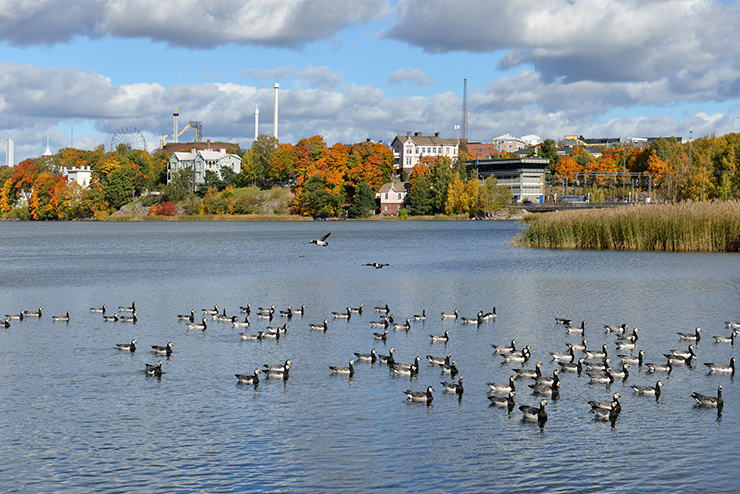 Töölönlahti Bay in the heart of the city is surrounded by beautiful parks. There are popular walking paths, leading you around the bay and through the parks. Expect to be joined by the locals who also make the most of this picturesque part of the city, heading out on their daily runs and romantic strolls.

The landscape transforms with Finland’s changing and distinct seasons. A walk will take you through verdant, green parks in the summer. In the winter it has a harsh beauty with the arrival of snow. Towards the north of the bay is the winter garden. Here there is a large variety of cacti and other tropical fauna in the greenhouse. It’s a great place to escape the winter chill into warm and wet tropics. There is also an outside rose garden during the summer. 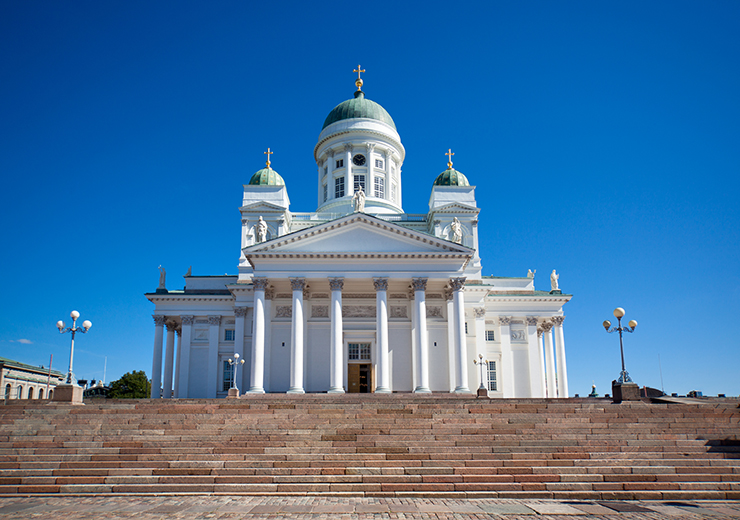 Helsinki Cathedral is an impressive landmark and is your first impression of the city when arriving by sea. Paying a visit to the cathedral is one of the best free things to do in Helsinki. Located along the northern side, the grand building dominates Senate Square. With its pillars, blue domes dotted with golden stars, and statues of the twelve apostles along the roof, guarding the city, the neoclassical church is a breathtaking sight. The interior of the cathedral is slightly plain when compared to the grand and elegant exterior. However, the cathedral does hold an atmospheric crypt with a small chapel which is worth exploring.

Senate Square is a hub of exciting activity and the setting for many festivities and concerts throughout the year. The flight of stairs leading to the cathedral is a popular meeting place with locals. It’s a great place to rest your feet and marvel at the other neoclassical buildings encircling the square, all of which were designed by Carl Ludvig Engel. 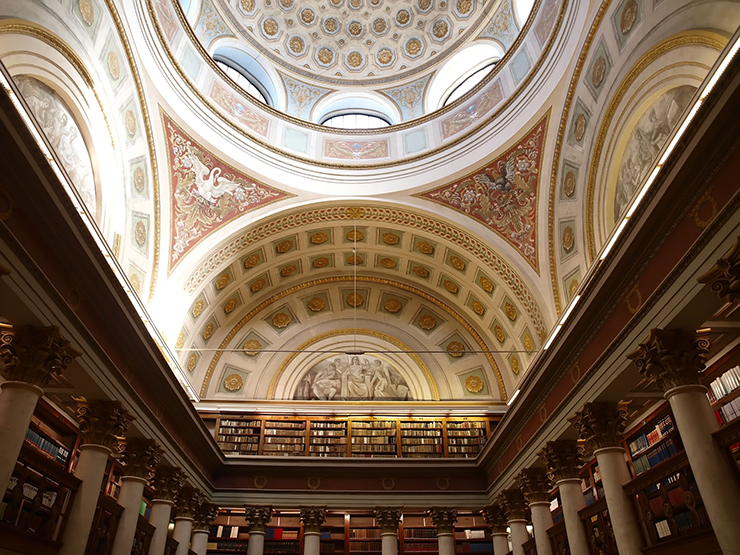 5. Wander through the National Library of Finland

Also found on Senate Square and well worth a visit is the National Library of Finland. It holds the country’s cultural heritage with over 109 kilometres of shelf space holding over three million books. As well as holding the largest library collection in the country, the building is architecturally stunning. The interiors were inspired by Roman temples, evident by the exquisite fresco hall with marble pillars.

Acquaint yourself with Finland’s renowned sense of style by exploring the city’s Design District. The creative core of Helsinki with a vibrant energetic atmosphere, you wouldn’t expect anything less from a city announced as the World Design Capital of 2012.

Over 200 boutiques, ateliers, museums and galleries are spread out over the compact grid of 25 streets. You’ll find shops from famous Finnish designers including Marimekko, Iittala and Artek. Walking the streets and window shopping the array of well-designed goods on offer is a great way to experience Finland’s simple, functional and beautiful style.

Helsinki has more than 30 public beaches, most on the seaside with some also along the river. However, Hietaranta beach is considered the best. Previously used as a landfill, it was converted into an area for sand storage at the beginning of the 20th century. The sand was never used, with the locals adopting it as a venue for their favourite beach activities in 1929.

It has a safe and shallow swimming area perfect for children and the Hietsu Beach Volley tournament has been held on the beach since 1995. There is a miniature golf course and tennis court nearby, for those who feel like flexing their sporty, and competitive, muscles. 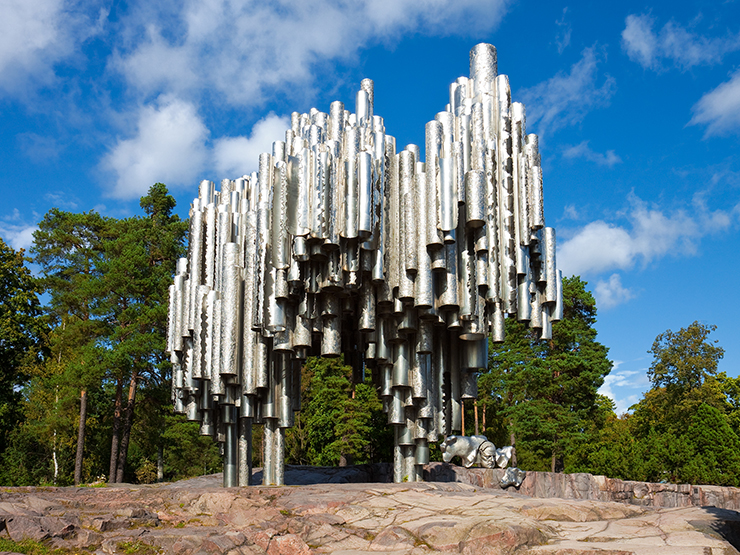 For another of the best free things to do in Helsinki, head to Sibelius Park. Named after Finland’s great composer Jean Sibelius on his 80th birthday in 1945. Jean Sibelius was famous for being able to capture Finland’s nature and history in his symphonies and compositions. The seaside park is in the district of Töölö and was designed to represent Finland’s rugged nature. The charming park has pleasant views of the sea, and benches shaded by old birch trees, and rocky outcrops.

In the middle of the park is the intriguing Sibelius Monument. Designed by Eila Hiltunen, the collection of 600 steel tubes called Passio Musicae is a kinetic musical sculpture. It captures the wind like a pipe organ, whistling softly in the breeze. However, there was some controversy over how much Eila Hiltunen’s sculpture paid homage to Jean Sibelius, as he never composed organ music. Consequently, a bust of the musician was later added to the monument.

In the middle of Helsinki’s downtown area, you’ll find the intriguing Kamppi Chapel. Also known as the ‘Chapel of Silence’, it’s been described as resembling all manner of things including an alien egg. Whatever it reminds you of, it cannot be argued it’s superbly designed. In classic Finnish style, it’s an ultra-modern and innovative design whilst also being simple and stylish.

It was dreamt up by the architects at KS2 and opened in 2012. No religious events, such as baptisms or weddings, take place here. Rather it’s used as a quiet space for people to retreat from the noise of the city, for a moment of calm. 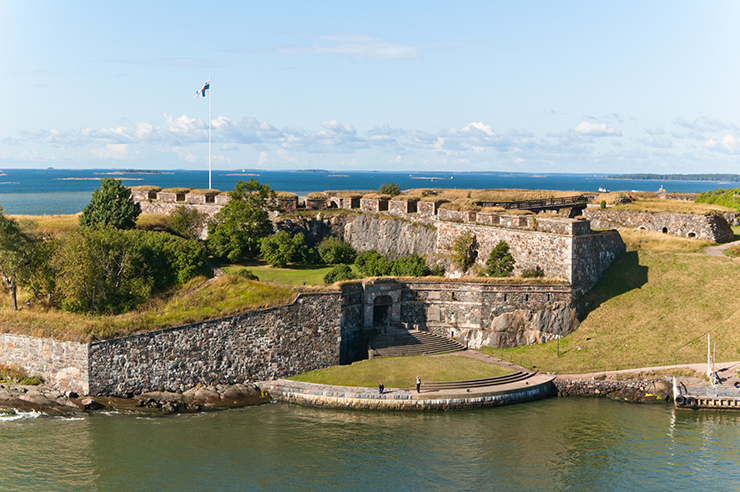 The sea fortress of Suomenlinna is one of Finland’s most popular attractions. Built by the Swedes in the mid-18th century, it became a UNESCO World Heritage Site in 1991 due to its interesting military architecture. Spread out across six islets connected by bridges, a 15 minute ferry ride will take you to the ‘Fortress of Finland’. The fortress is considered by many to be an open-air museum due to the wealth of history waiting to be discovered. A day can easily be spent here exploring the old bunkers, crumbling fortress walls, cannons and underground tunnels.

There are pleasant patches of green with ocean views to enjoy a picnic lunch. During the summer the last ferry departs at two in the morning. So you can spend the warm nights watching the sunset over the city. Full disclosure – you do have to pay for the ferry. But for just under three euros for a return ticket, we think this small cost is worth it.

Want to try some of the best free things to do in Helsinki for yourself? Whether you want to enjoy Helsinki’s free delights or are happy to splash the cash, experience the city with our Helsinki tours.