Japan really is a destination for all the seasons but it’s not all about cherry blossom and autumnal leaves. Sure, the seasons of spring and autumn are justifiably considered the best times to visit Japan. But for those brave enough to take on the chilly temperatures and sometimes inconvenient weather conditions, winter in Japan offers a wealth of unique experiences. If you still need convincing, here’s eight good reasons why you should visit Japan in winter. 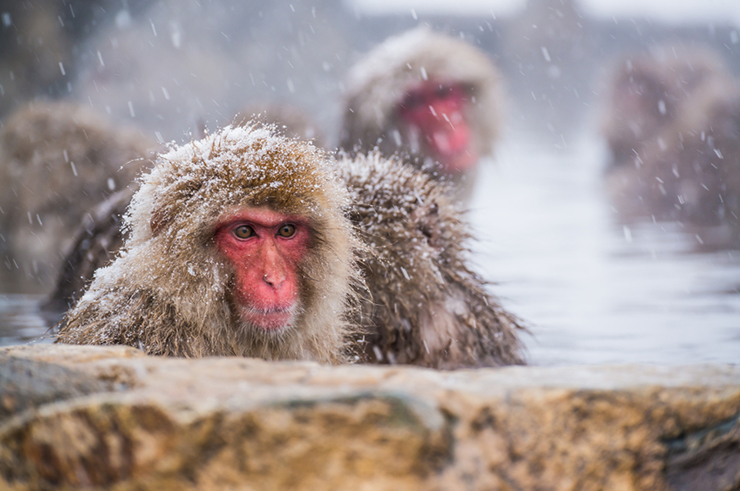 If there’s one image that will make you want to visit Japan in winter it’s this one. The Japanese Macaque (or ‘snow monkey’ as they are also known) is native to northern Japan and has become the country’s best-loved creature. When they’re feeling a little chilly, the monkeys will come down from the forests and soak in the hot springs. As well as adult monkeys there are often painfully-cute baby monkeys frolicking in the pools. And what makes them even more fascinating to watch is their eerily human-like expressions and behaviour.

The most popular place to see them in Japan is the Jigokudani Snow Monkey Park located in the Nagano prefecture. The large open-air hot spring bath attracts whole families of monkeys. They are used to humans so it’s possible to get quite close. The park is open throughout the year. However, you’ll find more monkeys here in the winter months. And this is when you’ll see them with frost on their whiskeys and fur. It’s also the most photogenic time of year as there’s often snow decorating the scene. 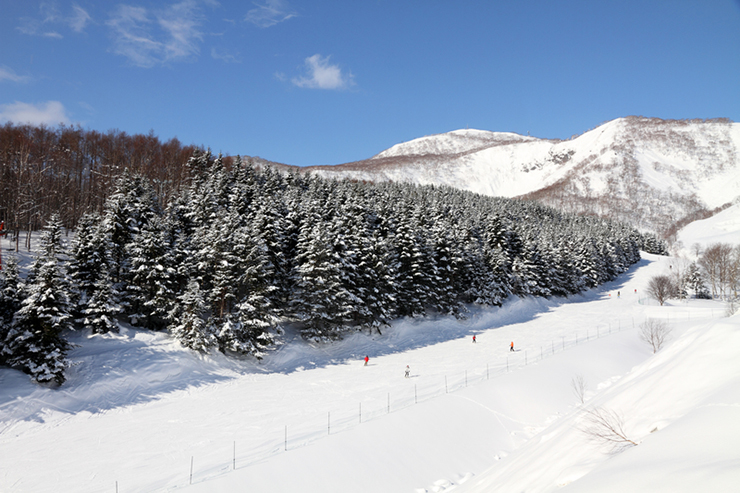 If you’re a bit of an adrenaline junkie, winter’s biggest draw is winter sports. And thanks to the particular weather systems that affect the north of the country, this part of Japan spends much of the season buried in snow. Which means skiing aplenty. In fact, Japan is world-renowned for its skiing opportunities. It offers some of the best powder skiing in the world with an average of 10 to 18 metres of snow each season. And it’s quality snowfall too – cold, dry and fluffy powder that’s an absolute dream.

The best spots for skiing in Japan are the north island of Hokkaido and the north region of Honshu. There are dozens of ski resorts to choose from – over 600 in fact. There are popular resorts with a thriving nightlife. Family-friendly resorts with well-groomed runs. Micro resorts with untracked slopes and few visitors. And resorts that have retained a more traditional Japanese feel, built beside hot spring towns. Better still, Japan’s ski resorts cater to all budgets from no-frills and cheap to unique and luxurious. 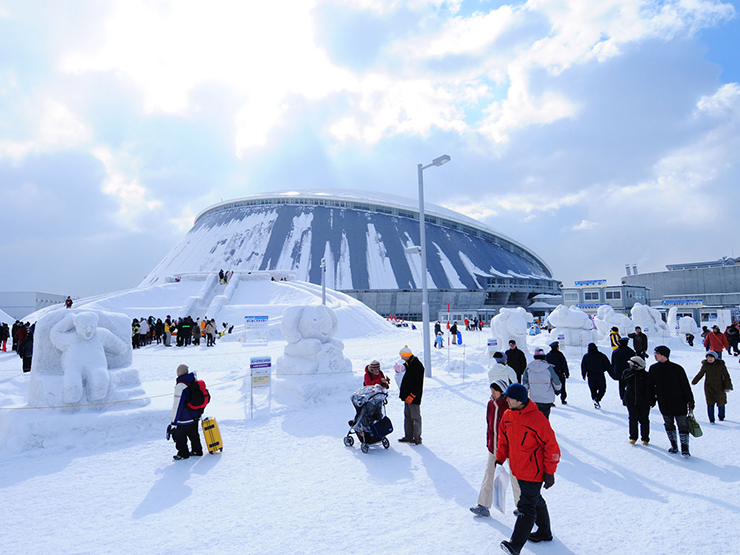 The combination of snow, dark nights and twinkling fairy lights is rather magical. And the city of Sapporo, capital of Hokkaido island, takes full advantage of that with the annual Sapporo Snow Festival. The festival runs for a week in February and is one Japan’s most popular winter events. Spectacular snow and ice sculptures are erected across the city, attracting visitors from all over the globe. Amazingly, these sculptures can reach heights of 15 metres and span over 25 metres wide.

At 10pm the frozen artworks are lit up to create a night time wonderland in all three of the main sites where the festival is held. There’s Odori Park, the entertainment district of Susukino and the family-oriented Tsu Dome where you’ll also find snow slides and rafting. Throughout the festival concerts and performances are hosted with the sculptures as their backdrops. 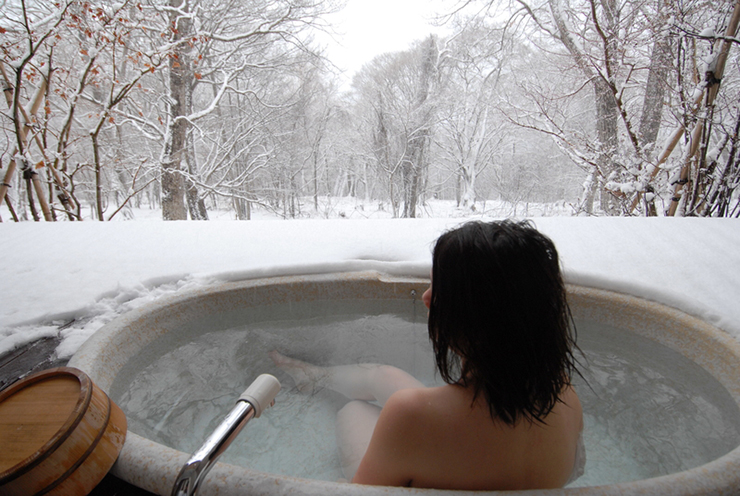 It’s not only snow monkeys that like to bathe in hot springs. The people of Japan do too. And although Japanese onsen are open year-round, bathing in thermal waters in the middle of a humid summer is just not the best way to do it. Far more enjoyable is relaxing in these therapeutic baths in winter. It may be cold outside but you can stay nice and toasty, soaking your tired bones and gazing upon pretty snow-covered scenes as you do so.

It’s quite an unusual sensation exposing your face to extreme cold while the rest of you gently boils in water. But in Japan, this takes on an almost transcendental quality as you contemplate nature. At this time of the year in some of the smaller onsen towns you’ll be doing this contemplation in relative peace and quiet with few other people around.

And while on the topic, want to know another thing that’s good taken hot in the winter? Sake. Oh, and let’s not forget udon noodle soup. Or grilled skewers of meat known as yakatori. Or Okinomiyaki cooked fresh on a hot plate in front of your very eyes…..nom nom nom. 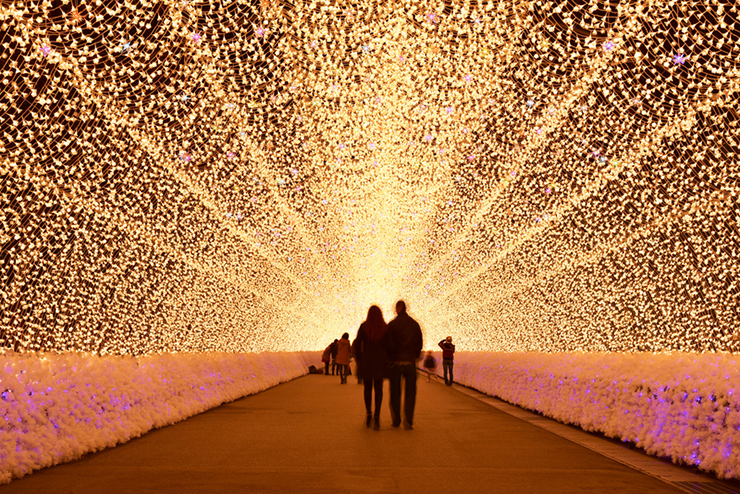 The Japanese love lighting stuff up. Whatever the time of year, the country’s most impressive landmarks are often illuminated as soon as dusk settles. However, they really take it up a notch in winter when practically every city centre is engulfed in fairy lights. Not that anyone’s complaining. Cities always feel that little bit more romantic and bewitching when glowing with light.

Some cities in Japan go all out in winter with entire parks covered with LED lights. There are even large-scale representations of the country’s most iconic landscapes, combining illuminations with sound effects and animations. Each year there’s a different theme from science fiction to circus. For the largest of Japan’s light displays, head for Nabana no Sato. 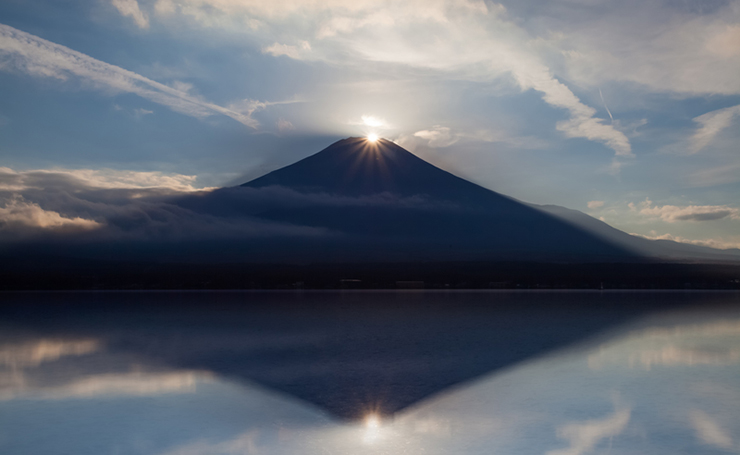 The image of Fuji’s perfectly conical volcanic peak is pretty special as it is. When the rising or setting sun aligns with the sacred peak, it’s even more incredible. This natural phenomenon resembles a sparkling diamond placed on top of Mt. Fuji, hence the name “Diamond Fuji”. It occurs twice a year between the months of mid-October to late-February. It can be seen for just a few days each time. The Fuji Five Lakes area is the best place to witness the event but sometimes it can even be viewed from observation decks in Tokyo.

Even if you miss out on the Diamond Fuji spectacle during your winter visit to Japan, you’re still more likely to be rewarded with clear views of the notoriously shy volcanic peak. The months of November, December and January are the best times to visit Mt. Fuji with more days of visibility than any other time of the year. Why? Because the colder seasons mean less haze and fewer rain clouds.

Most travellers visit Japan in spring or autumn. And there are plenty of great reasons to visit at these times of years. But who wants to be a sheep all their lives – try being a goat instead and travel off peak. The months of November and February are Japan’s quietest as far as tourism is concerned. So instead of jostling with thousands of other travellers to capture that iconic picture, go in winter and enjoy peace, quiet and much more space.

In winter, not only will you enjoy much thinner crowds at the country’s most popular sites but you’ll also enjoy cheaper prices too. The Christmas and New Year period sees prices soar but as long as you avoid these popular holidays you’ll save yourself a bundle visiting Japan in winter. There’ll also be much better availability of services like accommodation and transport. 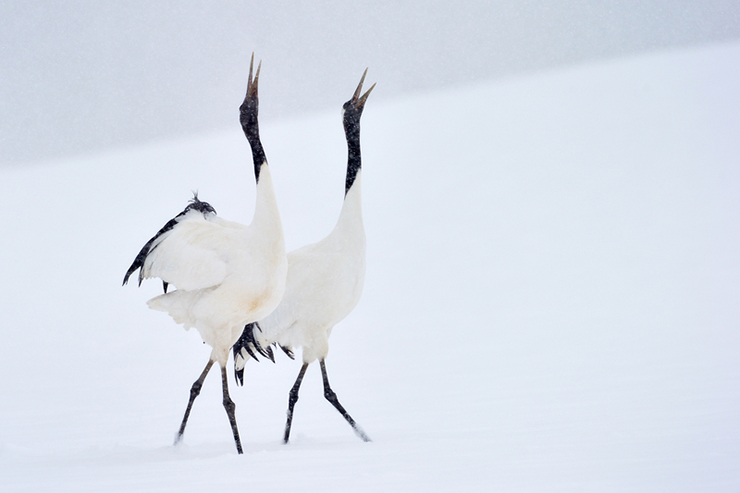 And last but certainly not least, winter is the time to witness the magical breeding dance of the red-crowned crane. In pairs, these elegant birds move closer towards each other with their slender necks and brilliant white plumage. Moving in delicate rhythm and throwing their heads back, the birds emit a duet of calls that inspire more mating pairs of cranes to join in. The social implications of this behaviour is complex and not yet fully understood but that doesn’t detract from the beauty of this scene.

The red-crowned crane, known as tancho in Japanese, is one of the rarest crane species in the world. Consequently, watching the birds perform their hypnotic mating ritual is a true once-in-a-lifetime experience. The best place to observe this spectacle is the Tsurui Crane Sanctuary where over half of Japan’s tancho spend the winter. February is the ideal month to visit with largely snow-covered landscapes for stunning photographs.

Ready to explore Japan in winter? Check out our new Snow Monkey Explorer tour or speak to our tailor-made team to design your perfect winter adventure.