When you consider how long ago it was Egypt was home to one of the world’s first great civilizations, it’s incredible so many of the iconic and mighty structures are still standing today. Cheney from our South Africa office recently travelled to Egypt on our King Tutankhamun group tour. She visited the magnificent buildings from this by-gone world, exploring the outstanding architecture full of intriguing history and incredible stories. Here she shares the five monuments of Egypt which made her fall in love with the country. But, perhaps surprisingly, the list doesn’t include the Pyramids of Giza or the Sphinx. 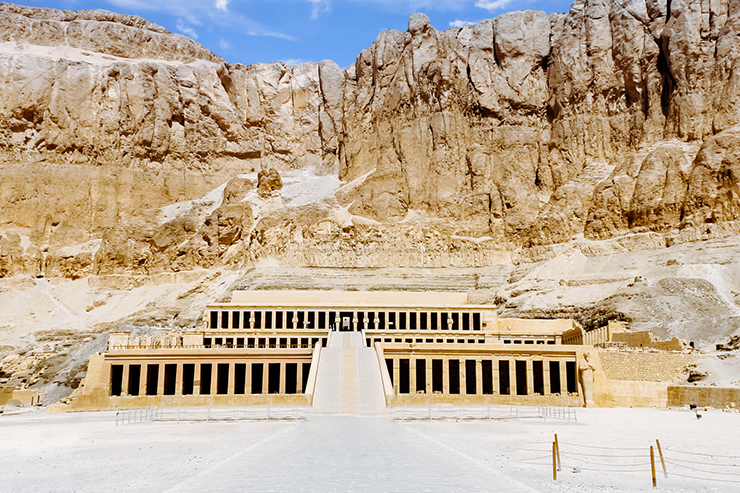 1. The Temple of Queen Hatshepsut, Luxor

The story behind the Temple of Queen Hatshepsut really captured my imagination. Queen Hatshepsut believed she would become the greatest pharaoh that ever lived. However, the daughter of Thutmose I lived in a time when women didn’t become pharaohs. Just the idea of it was out of the question. In the meantime, her stepmother gave birth to a baby boy named Thutmose II. She married her half-brother, automatically becoming the Queen of Egypt. Instead of passing the role of Pharaoh to her stepson when her husband died she controversially maintained her rule.

When she passed, her stepson Thutmose III tried to destroy her memory. While he successfully demolished many of the monuments dedicated to her, the Temple of Queen Hatshepsut remains as a site of her iconic power. Partly rock-cut and partly freestanding, it dramatically rises out of the desert plain. It’s easy to see why it’s one of Egypt’s most photographed monuments. 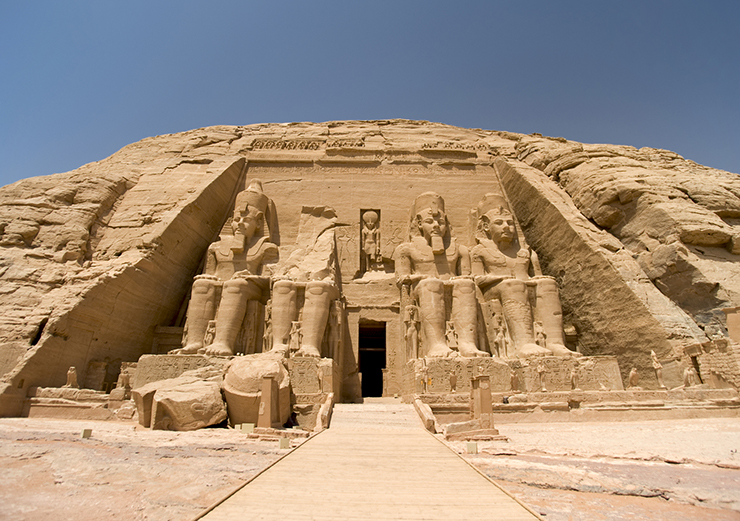 Perhaps the most famous of our monuments of Egypt outside the Pyramids of Giza. The second highlight of my trip was certainly Abu Simbel, built under the rule of King Ramses II.  A three-hour drive through the Sahara Desert, this impressive temple was carved into a solid rock cliff overlooking Lake Nasser.

With a mighty empire, eight royal wives, and countless children, King Rameses II was one of the mightiest pharaohs. Also known for his arrogance, he loved to flaunt his power. In the back chamber of Abu Simbel, he had himself built in the image of a god. An unbelievable example of architectural precision and narcissism, he had the temple built so the sun would shine through the temple and reflect on his face for a few minutes twice a year. These two dates were originally the 21st of February, his coronation, and 21st October, his birthday.

However, the temple was relocated in 1963 further up the Lake Nasser shoreline as the foundations were starting to erode. As a result the sun now strikes a day later, celebrated as the Abu Simbel Sun Festival. It’s hard to know whether King Ramses would be happy that millions of dollars were spent relocating his masterpiece or enraged his face is no longer illuminated on his special dates. Nevertheless, it’s an outstanding temple. 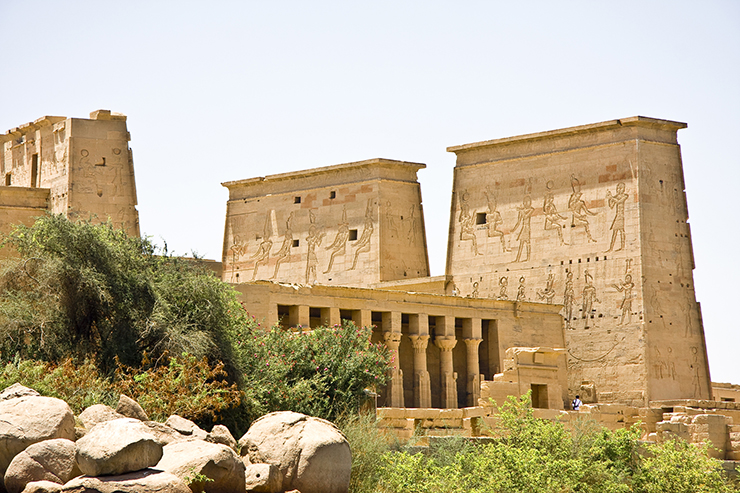 When it comes to Egypt, there is nothing that fascinates me more than its mythology. The Philae Temple was built for the goddess Isis and constructed during the reign of the Greek King Ptolemy II. Isis was worshipped as the goddess of nature and magic. She was widely revered as she was friends with both slaves and sinners and the wealthy aristocrats. The temple was moved to Agilika island after the flooding of Lake Nasser. Before 1972 when UNESCO intervened it was possible for six months of the year to row boats through the columns. It would have been completely submerged if action hadn’t been taken. Now in a new location, the temple overlooks the Nile and its stunning surroundings. It is one of the most beautiful monuments of Egypt, only enhanced by its picturesque location.

The Temple of Isis has attracted pilgrims for years. Also on the island are the Temple of Augustus, the Chapel of Osiris, and the Temple of Horus and Hathor. It’s easy to spend hours here taking photos, inspired by the beauty of this extensive temple complex. 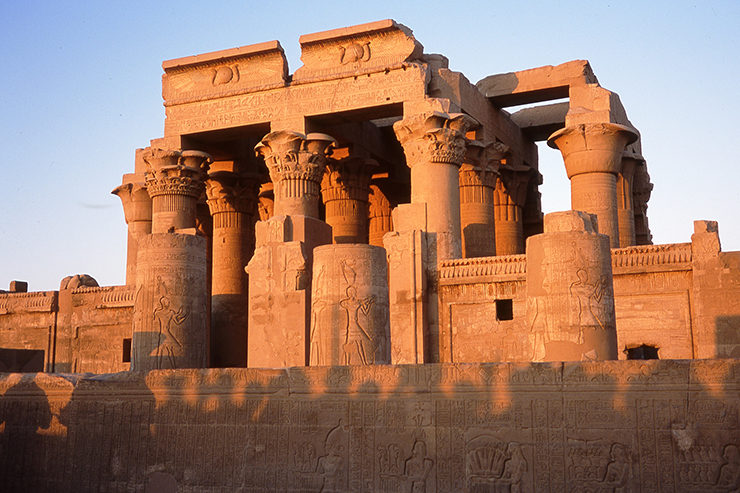 Have you ever seen a mummified crocodile? If not, then the Temple of Kom Ombo is the place for you. The temple is unique as it was built for both the crocodile god, Sobek, and the falcon god, Horus. It was the last temple erected during the reign of King Ptolemy V. Being a temple built for one god of light and one of shadow, you’ll find two parallel temples here. Along with some of the most beautiful and detailed hieroglyphs I saw during my travels.

Kom Ombo is also home to the Crocodile Museum. Here you’ll find ancient mummified crocodiles of all sizes which represent the god Sobek. There are also early depictions of calendars and old surgical tools found on the walls of the temple. This is a fascinating look at how ancient Egyptians practiced their medicine and methods of mummification.

Its safe to assume when you think of Egypt, you instantly picture the Pyramids of Giza. But did you know there is a pyramid that was built before this World Wonder? The step pyramid of Djoser was built in the 27th century BC. It was constructed by the pharaoh’s trusted architect, advisor and priest known as Imhotep. The structure started as something known as a ‘mastaba tomb‘, with sloping sides and a flattened roof. But instead it became the first-ever step pyramid with six layers atop of each other. It has an extensive labyrinth of tunnels underneath its surface measuring 5.5km (3.5 miles). This building paved the way for the iconic Great Pyramids of Giza. Therefore, I believe this structure doesn’t get the credit it deserves today.

The sites I’ve chosen for this list are the perfect combination of history, ancient folklore and amazing photo opportunities. They were chosen not just for their majestic architecture and beauty but because of the stories, fact and fiction, that really bring the sites to life. Egypt just doesn’t compare to anywhere else.

If you would like to see these monuments of Egypt for yourself, have a browse of our Egypt group tours.