Despite having some misconceptions before travelling to India, I really enjoyed the cities. The sights, the vibes, the colours, the people, the daily life that goes on despite everything and anything. I visited many and I particularly liked seven of them. Although, Jaisalmer definitely deserves a special mention. It’s completely different from the others and created some of the greatest memories of my entire trip to India.

Jaisalmer was founded in 1156 by a leader of the Bhatis Rajput clan whose name was Jaisal. The Bathis ruled the city until the independence of India in 1947. The city is set in the middle of the Thar desert and is less than 100 km from the border with Pakistan. It was incredibly prosperous due to its strategic position along the trading routes between India and Central Asia.

However, the city started to decline under the British rule along with the growth of sea trade and the increased use of railways. And when in 1947 the borders were finally set between India and Pakistan, its fate appeared to be set. As of today, its main source of income is tourism. 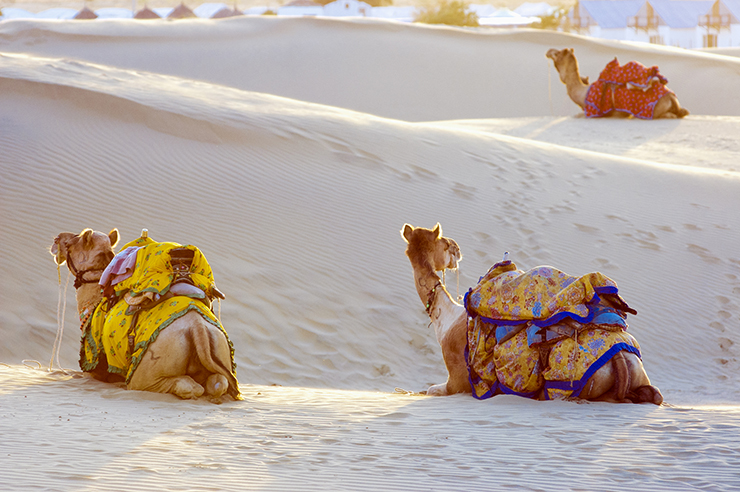 Jaisalmer is an incredible starting point for desert adventures. Lots of camel safaris start from just outside the city, and there are plenty of desert lodges. I would’ve loved to go on a desert safari, but with limited time, I made do with a short camel ride. My camel took me to the top of the dunes from which I admired a spectacular sunset and later a starry night.

The city is significantly smaller than the other cities I visited. Less than 80,000 people live there. Yet, it’s as chaotic as the rest, reinforcing my idea that people in India do actually enjoy the noise, the constant honking, the firecrackers. The city is famous for its beautiful fort, a massive sandcastle rising out of the sandy plains. From a distance, it almost looks like a mirage. It reminded me of a bygone era when camel trains could be seen in the desert and cities would be built on an oasis to serve as a trading point. 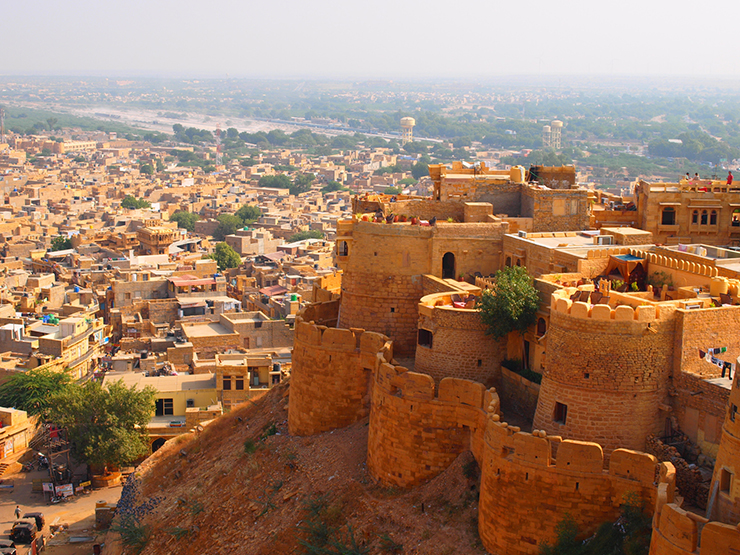 Jaisalmer fort is not like any other I’ve visited. Some 3,000 people still live inside, walking its narrow and intricate lanes every day. There are temples, palaces, havelis, museums, shops, lovely restaurants and cafés, and even boutique hotels. Unfortunately, the fort is collapsing onto itself. The increased use of waters from the hotels are having an adverse effect on the conservation of the fort. So much so that local authorities are now encouraging people to stay outside of the fort.

The fort of Jaisalmer is quite a sight – from both a distance and inside. And sure enough, the palaces and temples are beautiful places to visit. Yet, what I enjoyed the most in Jaisalmer was getting lost in its narrow lanes. At each turn, I found a different scene of everyday life. A cow slowly making her way through, chewing on whatever she may find. A dog resting in the middle of the street, unperturbed by passersby. A child performing some circus art, walking on a rope. 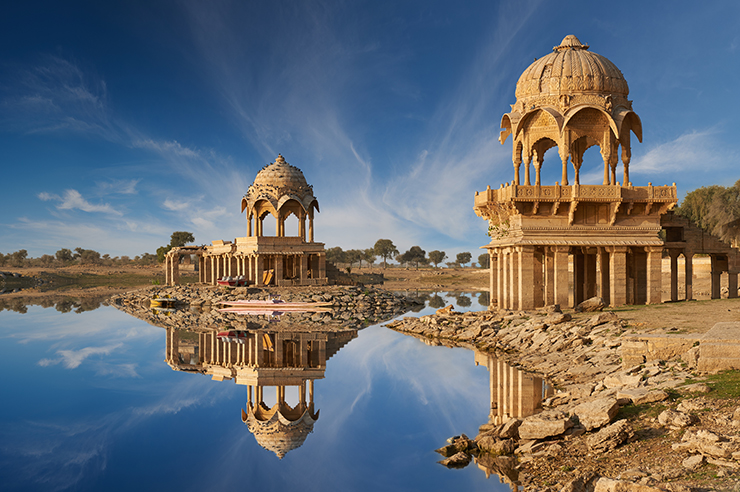 A place that I particularly enjoyed was Gadsisar Lake, an artificial lake built in the 1300s, and one of the few heritage lakes remaining in Rajasthan. I went there first thing one morning, and there were only a few people walking around the temples or feeding the fish. The sights and the light were both splendid.

One of the things I enjoyed the most in Jaisalmer was the shopping. I am hardly a shopaholic and less so when I travel – I like to keep my backpack as light as possible. However, Jaisalmer is famous for its embroidery. I couldn’t resist getting a beautiful bedspread and a few cotton shalwar kameez.

I happened to be in Jaisalmer during the Diwali Festival, known to Westeners as the Festival of Lights and considered one of the prettiest and noisiest festivals in India. Everything is decorated with beautiful lights, people exchange gifts and pop firecrackers. What was interesting to me is that despite the noise and mayhem, I was incredibly relaxed. So much so, that although I am a light sleeper and the party was in full swing outside, I slept like a baby all night. That’s the power of India: it’s relaxing despite everything.

Claudia Tavani is a former human rights lawyer and academic. She left her career to follow her real passion, which involves rafting down mighty rivers, zip lining across canyons and trekking to the craters of active volcanoes. Through her blog – My Adventures Across the World –  she shares anecdotes and stories, she hopes to inspire others to travel, she gives plenty of travel tips and occasionally goes on a rant. She’s on a mission to hike up all volcanoes in the world! To see more pictures of Claudia’s India trip with On The Go, check out her Instagram gallery.