Home to one of the first great civilizations and one of the original Seven Ancient Wonders of the World; Egypt needs little introduction. Kirsty Heigan from our Australia reservations team recently travelled to the Land of Pharaohs on our Road to Jordan tour. Here she shares her experience of the often-forgotten necropolis of Saqqara and its lesser-known Pyramid of Zhoser.

It was a foggy day as we drove through villages hidden within miles and miles of palm trees. The heavy mist lingered on top of the branches and moved slowly across the water of the small roadside canal beside us. The stillness had an eerie feeling, as if we were passing through a place of ancient secrets. And, considering our destination, this was quite appropriate.

Looking back, it was on this very drive that I began my love affair with Egypt. I was on my way to the place that would answer the questions I yearned to know and where all the Brendan Fraser movies had prepared me for. It was here that I would stand upon the land so perfectly crafted in both design and deception that all my childhood dreams would come true. We were arriving into a realm of trap doors, decoy maze tunnels, treasure rooms, hidden secrets… and the Saqqara pyramid.

The Step Pyramid of Zhoser

As we approached the end of the tree line we were abruptly hit with the desert that expanded across the horizon before us. The area of Saqqara is scattered with tombs, ruins and indistinguishable sand features that we later learned were small pyramids lost in time to the sands. But these features were hugely overlooked at first, as the skyline was dominated by the towering Step Pyramid of Zhoser. At 64 meters high and over 4,600 years old – this structure is truly awe-inspiring.

Today, Zhoser’s Step Pyramid remains shrouded in mystery. The entire complex holds as many tombs and tunnels as it does official theories from esteemed Egyptologists. One thing that does remain certain, however, is the unquestionable attention to both detail and deception. 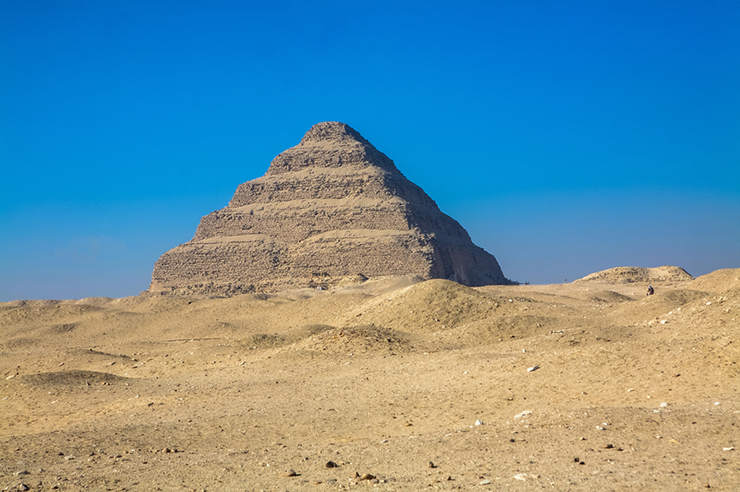 Still awestruck, we walked up a small dune and through the entrance gates that stood like guardians. For me, one of the greatest parts of travelling to Egypt is being able to walk ancient halls that were once so teeming with life. As you run your hands over walls they whisper to you their stories. Saqqara is exceptional in that its walls are still covered with their original coating. These were designed to reflect the sun’s rays to intimidate incoming enemies.

Continuing down the corridor, the temperature dropped. I was transported back to the time when these walls had once stood in all their former glory. We entered a room that opened to great columns and monuments. Guardian cobras were positioned to pounce upon unexpected guests and ward away bad spirits. Making our way out across the ancient cobblestone, we felt tiny in comparison to our surroundings. And as we entered the great court, for the first time, we were able to see a completely uninterrupted view of the pyramid before us. 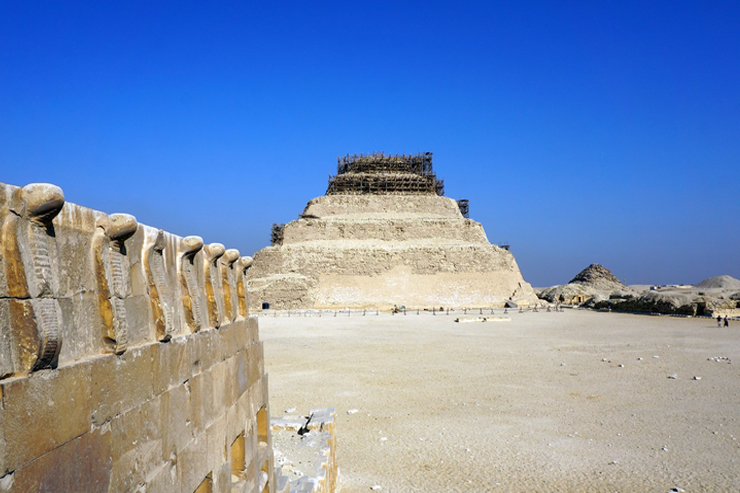 In times gone by, the great court was used for offerings, tributes from foreign lands and sporting spectacles. The landing, measuring just over 100 metres, serves an additional purpose. Behind the hall, we had just passed is an entrance. Concealed and hidden to those with an untrained eye, this entrance marked the path of glory to trained professionals, treasure hunters, and tomb raiders. For below the great court lies a maze of weaving tunnels that supposedly lead to the treasure chambers within the pyramid.

Zhoser and his architect Imhotep had very precise plans when building. The step pyramid itself is a design of firsts. It was the first pyramid, the first stone construct and was the first great tomb that would withstand the test of time. Knowing his burial offerings were of great wealth, Zhoser needed a way to protect them and so placed the maze beneath the great court. The tunnels reach a total length of over 3km but don’t, in fact, link to the Saqqara pyramid at all. Tempted tomb raiders were then left lost, disorientated and, ultimately, trapped. Egyptologists have discovered countless remains of those who had tried their luck, and failed.

To the north of the Pyramid is a small courtyard, and beneath a single pavement lies the true entrance to the antechamber of Zhoser’s famed step pyramid. The antechamber is accessed by a sloping horizontal corridor taking you further underground. Once descended, however, the antechamber is simply a gateway barred by 3 separate trapdoors.

The Tomb of King Zhoser

For the rare few who prevail, the central tomb chamber is concealed by a heavy stone doorway covered in pyramid texts – now known as the oldest religious texts in existence. This doorway was believed to provide the entrance to the afterlife. The room beyond the central chamber then hosts four more doors, three of which are false. But, as it is said, ‘just as the sun sets in the west, so shall the King’s body lie forever.’ 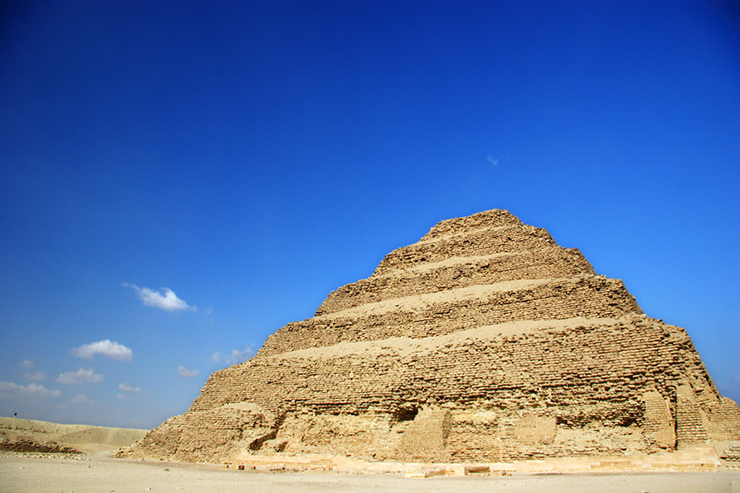 Over the millennia, the tomb has sadly been raided. No one knows who by, when, or how many times it has happened. All that remains today is one foot of the famous King Zhoser.

Even without the trap doors, the history, and the privilege of standing before the oldest building on the planet – Saqqara is an exquisite place to visit. On a clear day, the site becomes a viewpoint from which the structures that followed in Zhoser and Imhotep’s footsteps can be seen across the desert. Examples include the Bent Pyramid, Red Pyramid, and the Great Pyramids of Giza.

Want the chance to see the ancient Saqqara pyramid yourself? Check out our tours to Egypt.