With its numerous sanctuaries, national parks and tiger reserves, India is the perfect wildlife holiday destination. Covering large areas of the country, these nature reserves are home to an exotic and exciting variety of wildlife that captivates visitors. The popularity of these national parks has increased rapidly over the years. And it’s not surprising. For what is more exciting than coming across the majestic tiger out on his rounds? Or a parade of elephants gathering around a water body, drinking their fill?

Humans have always held a fascination for animals and birds. The sheer joy of watching them in their natural habitat is simply enthralling. And if you’ve never been on a wildlife tour, you’re missing out on an unforgettable experience. So this week guest blogger Narendra Kumar is here to tell you where to go for a wildlife holiday in India. 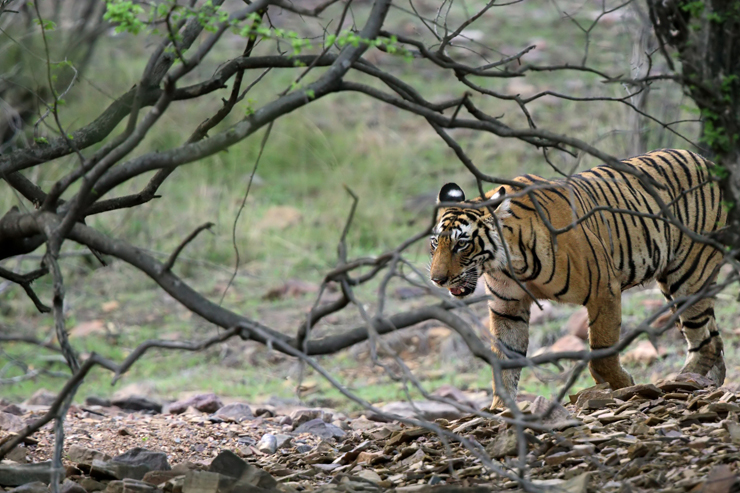 Ranthambore National Park is spread across 1,334 sq.km in the state of Rajasthan. It’s a wildlife photographer’s paradise with tigers the main attraction. Once a hunting ground for the Maharajas, Ranthambore now owes its popularity to its tiger trails and bird watching tours. Of course, the best way of exploring the park and seeing its wildlife is on safari game drives. Apart from the tiger, sloth bears, wild boars and sambar can also be found here. Other attractions inside the park are the ruins of Raj Bagh ruins, the waterholes of Bakola, and the Padam Talo lake.

Best time to visit: The park is open from October to June, but the ideal time to view the tigers is from March to May. 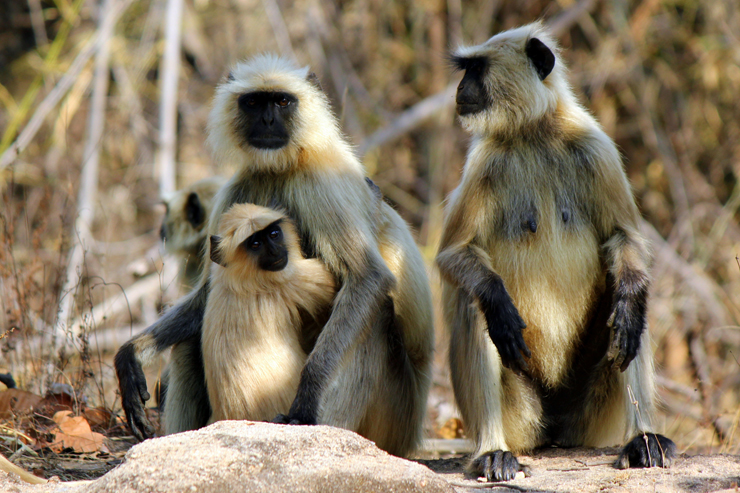 If you are utterly fascinated with the Bengal tiger, then Bandhavgarh National Park in Madhya Pradesh is where you need to be. With a large population of tigers and langurs, it’s one of the best jungle safari destinations in India. Other than the striped cats, this park is also home to a wide variety of exotic fauna species. This park too, like several others, once served as the hunting ground for royalty. The best way of witnessing the wildlife here is on a jeep safari or birding tour. The Khajuraho temples and the Bandhavgarh Fort are other attractions in the area worth checking out.

Wildlife in the park: Bengal tigers, elephants, deer, primates, reptiles and a large number of birds.

Best time to visit: You can visit the park between mid-October and June though for Bandhavgarh at its greenest, visit between November and February. 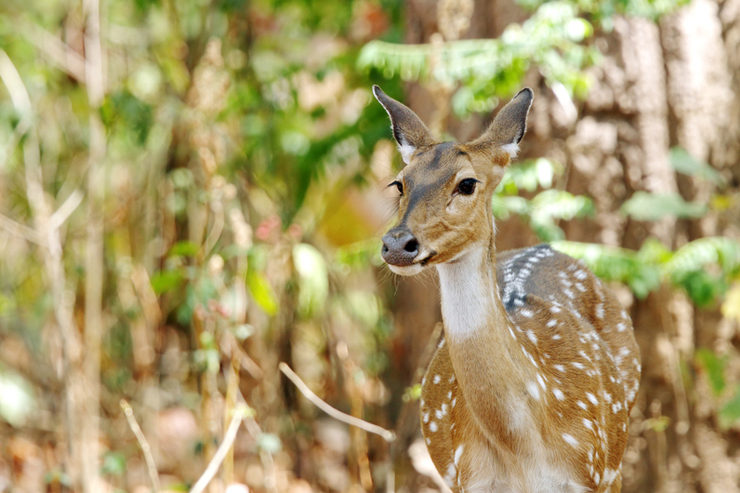 The popular Jim Corbett National Park holds the distinction of being the first national park in Asia. It was also the first tiger reserve set up under Project Tiger in 1974. The main attraction here is the Bengal tiger and the park is one of the top destinations in the state of Uttarakhand. Besides tigers, there are almost 488 different species of plants and a wide variety of wildlife including elephants, chital, sambar deer, and king cobra. Around 600 different bird species are also found here. The best way of seeing the wildlife here is on a jeep safari.

Best time to visit: Visitors are welcomed from mid-November to June though the best time for tiger sightings is March to May. 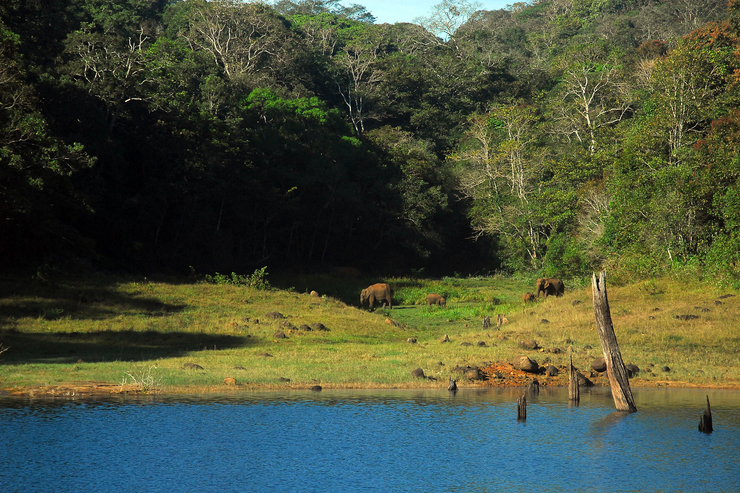 Periyar National Park, also known as Periyar Tiger Reserve, in Kerala, is considered to be one of the most famous national parks in South India. Located in the Western Ghat ranges, the park is home to a large number of tigers and elephants. Besides this, there are over 1,965 flowering plants including 171 grass species and 143 species of orchids. And as if that wasn’t enough, there are 60 species of mammals found here including the Asian elephant, Indian bison, sambar deer, Indian wild dog, leopard, barking deer and the smooth-coated otter, amongst others. It is this incredible biodiversity that has made Periyar one of the top national parks in India.

Wildlife in the park: Elephants, tigers, leopards, deer, snakes and reptiles, to name a few. 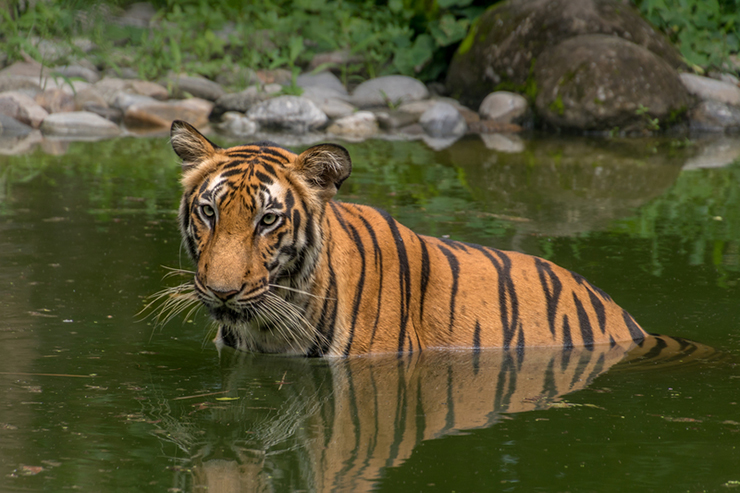 Sundarbans, a UNESCO World Heritage Site in the state of West Bengal, lays claim to being the world’s largest mangrove forest. It also possesses one of the world’s largest tiger populations. It derives its name from one of the mangrove plants known as “Sundari”. Apart from the tiger, the main attractions of this region are monitor lizard, estuarine crocodile and the Olive Ridley turtle, besides others. Here, you could follow tiger trails, view beautiful sights from the various watch towers and also visit the Bhagabatpur Crocodile Project.

Wildlife in the park: Tiger, lizard, crocodile and turtle, besides many others.

Best time to visit: The park remains open throughout the year. However, the best time for viewing wildlife is from October to April. 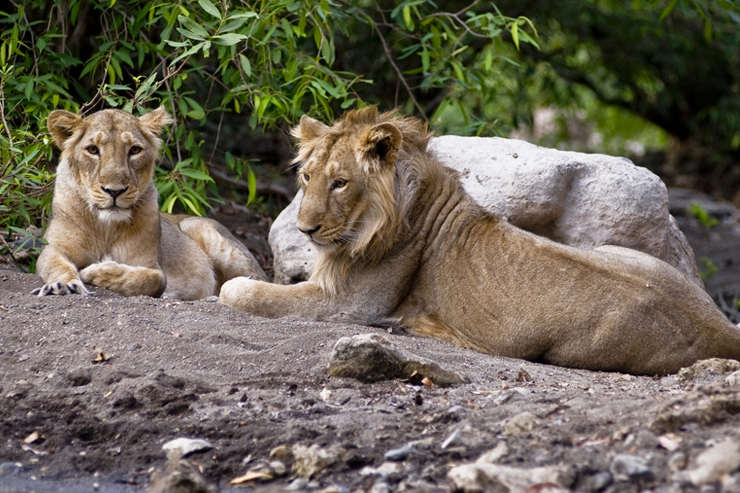 The Gir National Park is one of the foremost attractions in Gujarat, and one of the few places where you can see the Asiatic lion in all its glory. The most sighted animal here is the chital, or the Indian spotted deer, with a population of over 32,000. The park is also home to other wild cats like leopards, jungle cats and the rusty spotted cat. You are also likely to come across African hyena, Indian hares, and even the honey badger, also known as the “most fearless animal” in the Guinness Book of World Records. Gir National Park also boasts an incredible variety of fauna.

Best time to visit: October to May is regarded as the best season to visit the park. 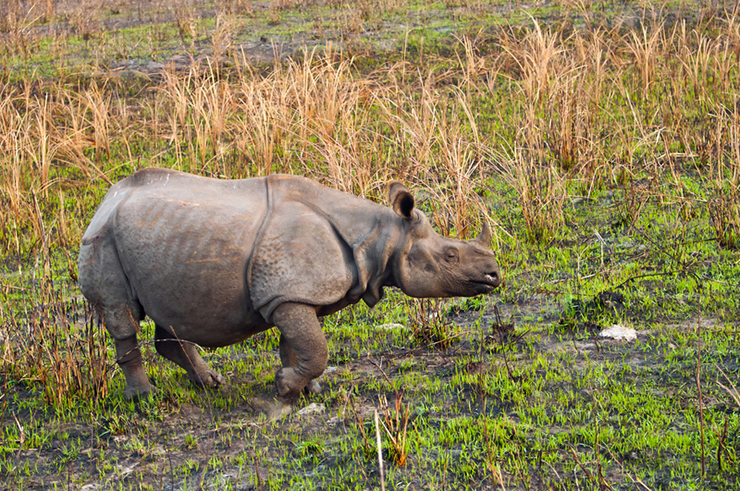 Kaziranga National Park in the state of Assam is one of many UNESCO World Heritage Sites in India. Spread across 429.69 sq.km, this park is home to the world’s largest population of the one-horned rhinoceros. And what distinguishes Kaziranga is its exemplary standards in the preservation of this majestic beast. Along with the rhinoceros, this park is also home to elephants, bears, panthers and various pretty birds.

Wildlife in the park: One-horned rhinoceros, elephants, bears, wild buffalo and others.

Best time to visit: The park is open daily from November to April with morning and afternoon Jeep safari game drives available each day. 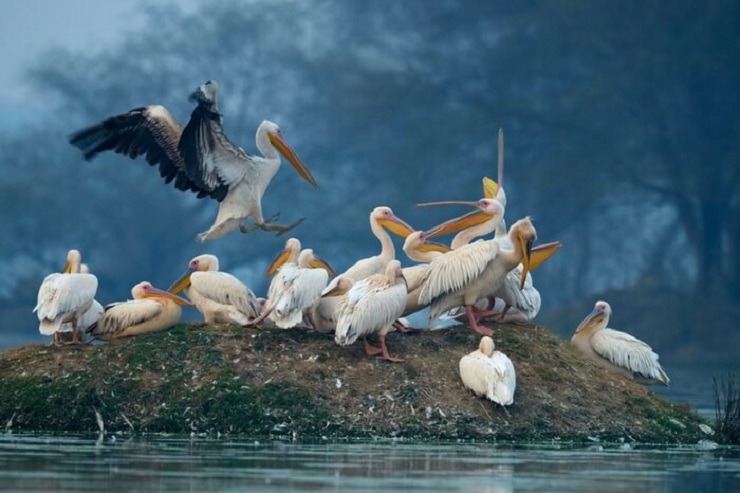 Keoladeo National park, also known as the Bharatpur Bird Sanctuary, located in the state of Rajasthan, is one of the best places for bird watching in India. The park originally served as a game reserve for the Maharajas and the British. It was in 1982 that Keoladeo was declared a national park before being listed as a UNESCO World Heritage Site in 1985. The park is home to over 370 species of birds. In addition, it serves as the breeding ground for the rare and elusive Siberian crane. You’ll also find animals including the basking python, painted storks, nilgai, and deer, besides much more. The park offers treks on foot as well as cycle and rickshaws rides so that visitors are able to explore the park.

Wildlife in the park: Siberian Crane, painted storks, deer, nilgai, and basking python, among others. 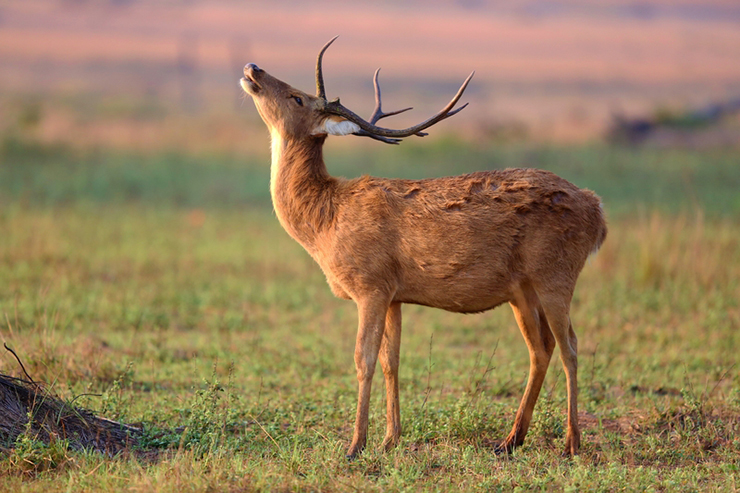 Kanha National Park encompasses an area of 940 sq.km and is one of the largest parks in Madhya Pradesh. The splendid Bengal tiger is found in large numbers here and it’s where the National Geographic’s award-winning documentary ‘Land of the Tigers’ was shot. Aside from its tiger population, the park is also renowned for saving the Barasingha from extinction. As if this wasn’t enough to make Kanha National Park a top wildlife holiday destination in India, it’s also home to 350 species of birds and flora.

Wildlife in the park: Bengal tiger, Barasingha and a variety of birds.

Best time to visit: Mid-October to the end of June is the best time for visiting the park. 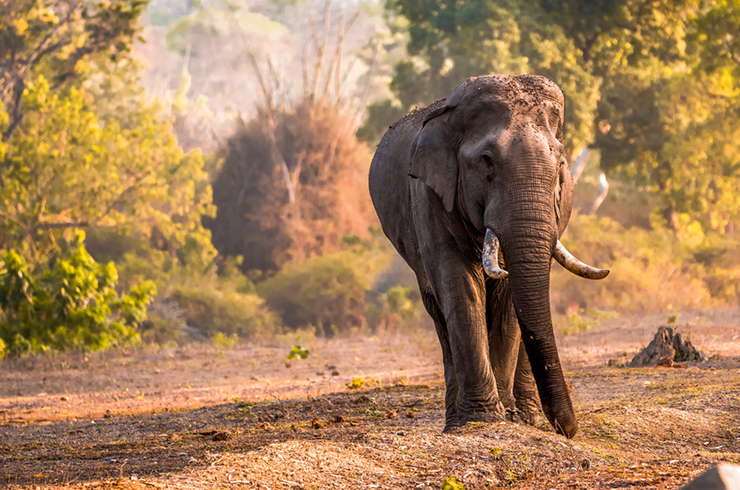 To experience one of the best wildlife tours in India, visit the Bandipur National Park located in the state of Karnataka. This wildlife reserve, extremely rich in biodiversity, is home to an impressive array of wildlife. Tigers, gaur, sambar, chital, mouse-deer, and four-horned antelope are just some examples. The park also offers excellent opportunities for bird watching as it’s home to a variety of birds including jungle fowl and green pigeons.

Wildlife in the park: Tigers, gaur, sambar, mouse-deer, and four-horned antelope, besides others.

Best time to visit: The best time for visiting the park is between the months of March to June.