Skip to content
On The Go Tours Blog > Top 5s and 10s > Where to see Elephants in the Wild? Our Top 5 Destinations (6 minute read)

Whilst visiting a zoo or sanctuary may give you a closer experience, nothing beats seeing elephants in the wild. Taking in their immense size, intelligence, and majesty as they stride across the savannah or amble through the forest is the highlight of any safari. And, free from restraints and human interaction, you can observe these animals performing their natural behaviours in a breathtaking encounter made all the more special by the natural beauty of their habitat. Native to Africa and Asia, many elephant populations are now protected within national parks and nature reserves. Here’s our pick of where to see elephants in the wild. 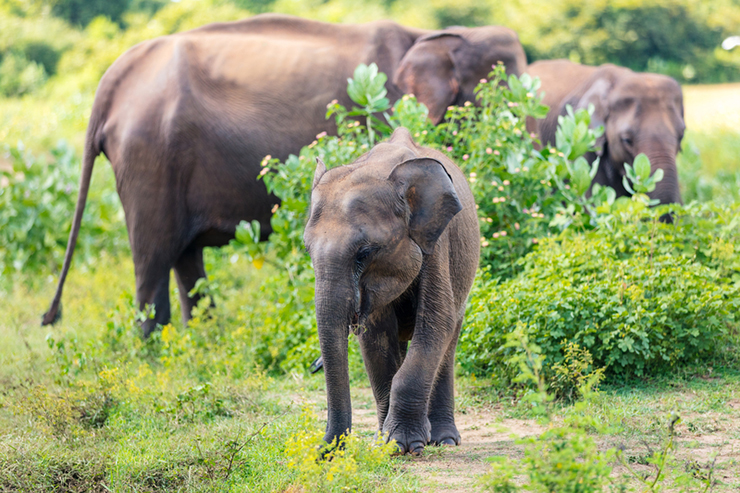 If you’re wondering where to see elephants in the wild, then Sri Lanka is a great place to start. The Sri Lankan elephant is a sub-species of the Asian elephant that roams in countries such as India. Deeply rooted in Sri Lankan culture, elephants have been used in religious and cultural ceremonies for thousands of years. Once even used to wage war by ancient Sinhalese Kings, today these animals are one of Sri Lanka’s main ecotourism draws.

Udawalawe National Park is famous for its large population of elephants, with herds roaming in numbers of up to 100. The park was originally established to protect the catchment area of the Udawalawe Reservoir, which is located at its centre. To the north lie the central highlands, offering a stunning backdrop to the rest of the park.

Enjoy adults and young elephants playing, feeding and bathing in the waters. Time your visit with dusk or dawn for the best sightings of elephants roaming freely across the grasslands. Or visit at the end of the dry season to experience the huge herds gathered by the park’s waterholes. 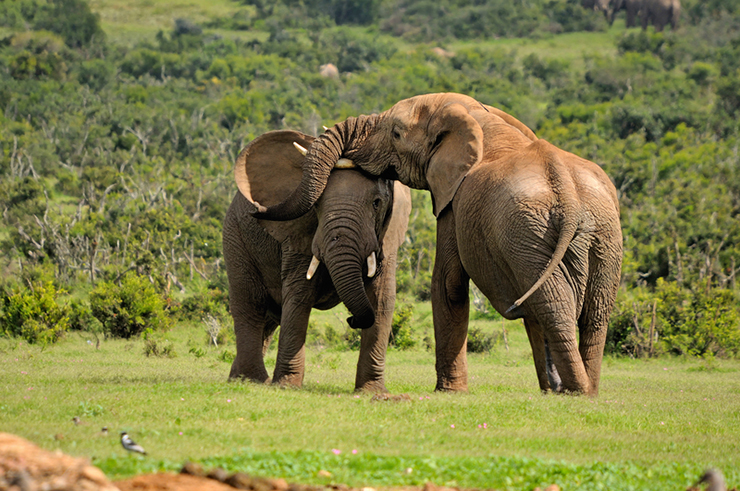 The third-largest national park in South Africa, Addo Elephant Park covers a huge 1,800-square-kilometres. The park sits just beyond the eastern end of the popular Garden Route, within the Sundays River region of the Eastern Cape.

Originally established in 1931, the park was created to save the local population of elephants which had dwindled down to just 11 individuals after centuries of hunting. Fortunately, the park has been a conservation success story, now boasting more than 450 elephants which you can easily spot on a self-guided or organised game drive.

Besides its elephants, Addo Elephant Park is also home to Africa’s ‘Big Five’. Visitors can spot black rhino, lions, leopards and buffalo, with the option of walking or horseback safaris for the more adventurous. 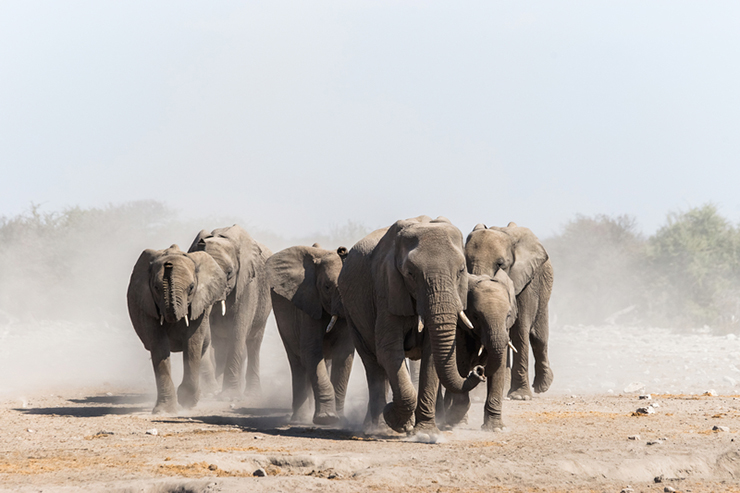 Despite rampant poaching throughout Africa, Namibia’s wildlife populations are thriving. With 200 million acres of diverse landscapes, including lush floodplains, woodland savannah and picturesque deserts, the country is home to a total of around 22,000 elephants.

Etosha National Park is unique in Africa, with its key feature being a salt pan so large it can be seen from space. Wildlife is easily spotted due to the animals tending to congregate around the waterholes. Etosha’s elephants appear almost white after bathing in the park’s salt pans.

In order to survive in the arid climate, some of Namibia’s elephants have gained some unique characteristics to become ‘desert adapted’. They possess larger feet than other elephants for more effective movement through the sand. In addition, they can go for days without drinking water as they obtain moisture from the vegetation they eat. 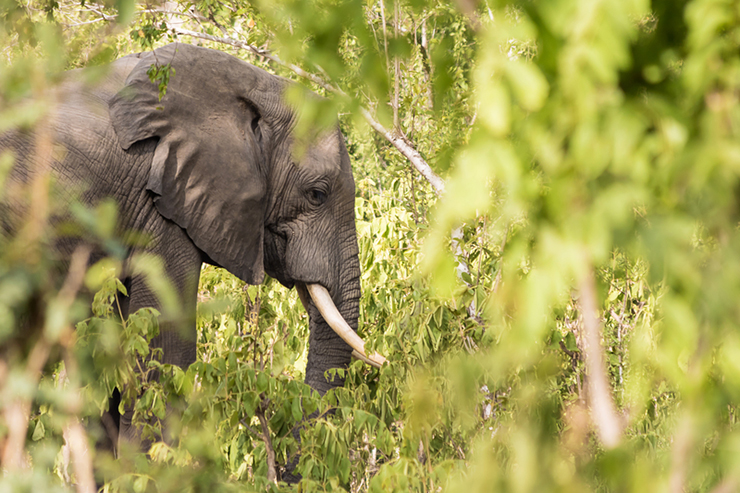 Tanzania is overflowing with national parks, being home to the famous Serengeti, Ngorongoro crater and more. But when choosing the best place to see wild elephants, there’s really no contest – you should head straight for one of the world’s largest protected areas.

Located in the south of Tanzania, Selous Game Reserve is a UNESCO World Heritage Site. At 50,000-square-kilometres, the reserve is an immense sanctuary for wildlife as it’s relatively undisturbed by human activity. Of the 53,000 elephants in Tanzania, around 15,000 live in the reserve.

Unlike Tanzania’s other safari hotspots, Selous Game Reserve sees fewer visitors. It’s best to visit during the dry season between late June and October as wildlife is easier to spot by the park’s water sources. 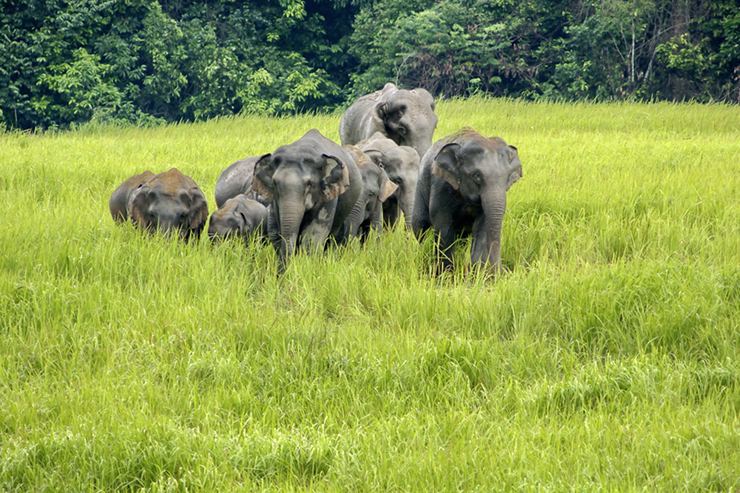 Thailand’s dense jungles are thought to contain up to 3,000 wild elephants. Covering over 2,100-square-kilometres, Khao Yai National Park is the oldest and most visited national park in Thailand. The park is also a UNESCO World Heritage site as it incorporates one of mainland Asia’s largest intact monsoon forests.

Khao Yai contains one of Thailand’s largest populations of wild elephants. And these majestic creatures play an important role in keeping the country’s forests healthy and thriving. As the elephants roam and eat, they spread germinating seeds through their waste, which helps maintain the forest habitat.

As the park is so popular, it’s best to avoid long weekends or holidays. For the best sightings of elephants, try and time your visit between the months of December to February.

Have youLooking for your next wildlife adventure? Check out our range of wildlife holidays.