Once a year the sleepy desert town of Pushkar erupts into a frenzy of activity as hundreds of thousands of cattle traders, pilgrims, and travellers – plus some 40,000 counts of livestock – descend upon its sands for the annual Pushkar Camel Fair in November. 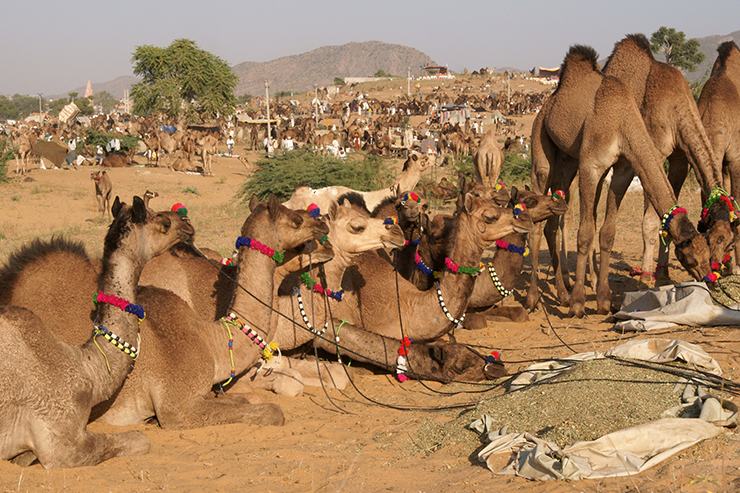 What happens at the fair?

Tents are raised and colourful market stalls appear as a steady stream of merchants, cattle traders, herdsmen and farmers filter into the dusty Pushkar fairground with their families and livestock in tow. Cattle are watered, camels preened and men huddle in groups to discuss their wares and size up the competition in preparation for five days of serious livestock trading.

What follows suit is a busy schedule of selling and buying, but if bovine judging and camel appraisals aren’t your thing there is plenty else on offer. Cheer on your favourite jockey as they speed to the finish in exciting camel races, watch fine specimens strut their stuff at the camel beauty pageant, or marvel at the ‘staches on display at the longest moustache competition. Alternatively join in the festivities and mingle with the locals in a game of cricket or tug of war. Though you may not be able to get in on the livestock trading action you can practise your bargaining skills at one of the many market stalls with various local wares on sale.  After dark the party continues with traditional folk dancing against the backdrop of rhythmic music.

While the perfectly preened camels take centre stage at this colourful cultural affair, the Pushkar Camel Fair also carries some important religious significance. Long before camel races and beauty pageants this desert town has been considered an important holy site as it houses the only temple dedicated to the Hindu god Brahma in all of India. Every year thousands of pilgrims flock to the banks of Lake Brahma, where the temple is located, to bathe in its sacred waters on the day of the Kartik Punima Full Moon which coincides perfectly with the Pushkar Camel Fair. 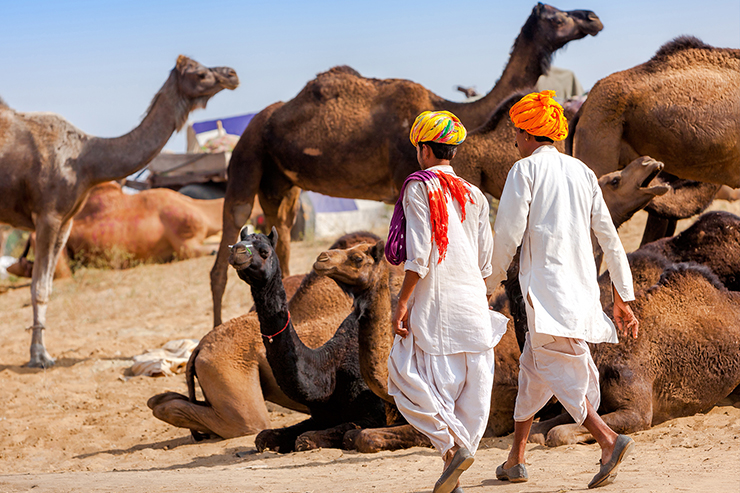 As the festival still holds such religious significance, it’s important for travellers to remember to dress conservatively. Be aware that if you’re visiting the lake, you’ll likely be approached by Hindu priests attempting to give you a blessing in exchange for a donation. In these circumstances, it’s best to stay calm and firmly walk away.

Traders tend to congregate up to five days before the fair starts to begin trading their camels. This is by far the best time to wander this desert town and experience this ancient tradition.

We visit Pushkar alongside some of India’s most famous sights on these group tours.