Encompassing some of the greatest scenery in all of Jordan, the Wadi Rum is a vast landscape of ancient riverbeds, sandy desert and epic rock formations. Forged over millions of years, this protected area covers some 720 square kilometres and is still home to Bedouin tribes today.

Spending a night in Wadi Rum is as much of a cultural affair as it is an escape into the wilderness. Here’s what Terri Burgess, a member of our reservations team, had to say about her overnight experience. 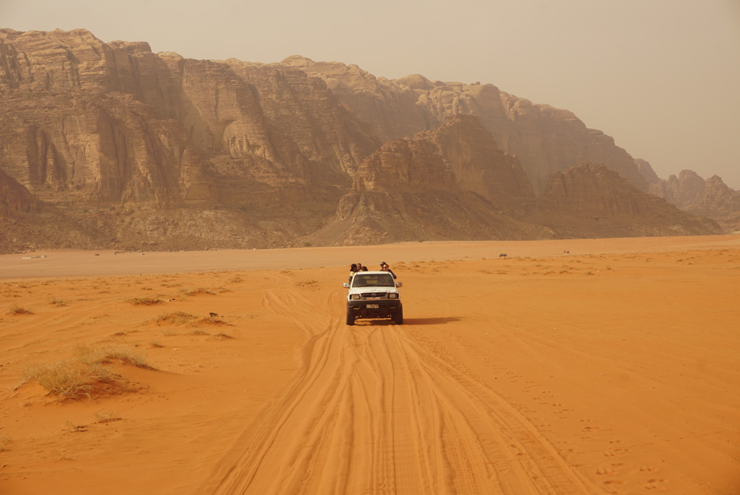 I’ve camped in both the Moroccan Sahara and Namib Desert – and loved every second – so this was something I’d been waiting for with very high expectations. And Wadi Rum did not disappoint.

We set off from the village in our jeep safaris in the early afternoon. Over the next three hours we cruised across the sand, exploring dunes, coves and rock formations, before arriving at Rainbow Camp in the early evening. We unloaded the jeeps and raced to our rooms to dump our bags.

We then climbed up to the nearby rock bridge to watch the sun as it set beyond the sea of red sand ahead. The sky was a little overcast, but the colours were spectacular. New found friends who had been chatting nonstop for hours one by one fell silent as we took in the beauty before us. The sun gradually sank out of the sky and was replaced with a blanket of darkness. 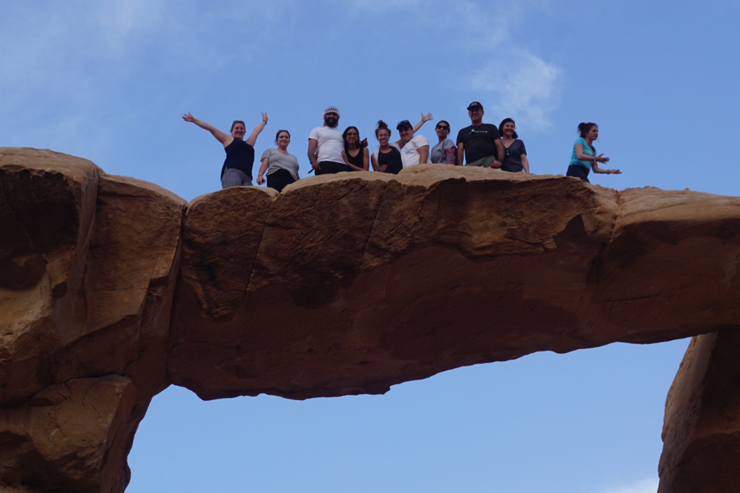 Dragging ourselves down from the rock, we made our way back to camp to eat. Dinner was a magnificent display of its own, with traditional food and cooking methods (I won’t give away the surprise) and mouthwatering fresh fruit, vegetables and meat. Shortly after we’d filled our bellies and roasted marshmallows on the fire, the locals got out their instruments to play traditional music and dance.

My hand was the first to be pulled up to dance and, slowly but surely, everyone else joined. Hand in hand with new friends, locals and guides we circled and danced for what felt like hours to the beautiful sounds that filled the tent. As the night drew on and people started to peel off to bed, the music hushed for those who wanted to sleep and shisha was brought out for those who didn’t.

Hours were spent sitting under the stars, smoking shisha, drinking mint tea and learning words of Arabic from our guide. Others shared stories of home and their travels and it was only when the wind began to pick up that we headed to our rooms to sleep. 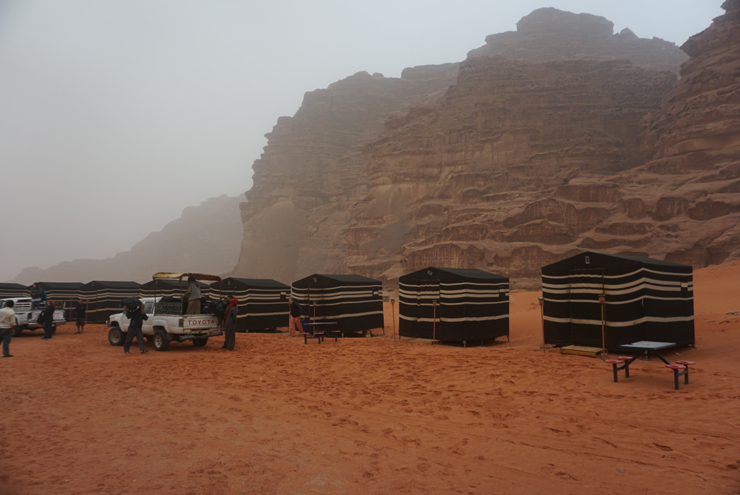 Sometime in the early hours, before the sun had risen, I awoke to the sound of rain pattering on the roof of our tent. Rain? Really? We woke again in the morning to some very excited locals. This was only the second time it had rained here in the last 12 months. And they couldn’t conceal their excitement as they rely on the rainfall but simply do not get enough.

It was wonderful to see the excitement on their faces and we all soaked up the joyful atmosphere. But I’ll admit, I was thankful the rain had ceased by the time we needed to jump back into our open air jeeps for the half hour drive to the coach.

The drive felt like a dream. As the sky started to clear and the sun draped in, the landscape seemed even more surreal than the day before. A land so alien to anything I’d ever seen.

Of course, this was the Middle East and not everything can always run so smoothly. Travelling at the back of the convoy we gradually started to slow and watched as the rest of the group sped off into the distance. We had a flat tyre, and in the middle of Wadi Rum!

A quick radio call from the driver and the rest of the group turned back for us. Within minutes the locals had the car jacked up and the spare in place. Once again we were off, waving goodbye to the desert and its beauty. But now en-route to finish off our Jordan experience with a float in the enchanting Dead Sea.

Fancy spending a night in Wadi Rum? We visit our desert camp on our Jordan group tours.