Sri Lanka is a very spiritual country, and this can be seen across the nation. Whether it be the Catholic saint effigies you find scattered throughout Colombo or the many Hindu temples of Jafna and Trincomalee. However, the religion that’s most widely followed is Buddhism, with numerous pagodas, temples and religious sites dedicated to the study of Buddha’s teachings.

After his enlightenment, it’s believed that Buddha visited Sri Lanka on three separate occasions. Thus it’s easy to see why Buddhism is the national religion and why Sri Lankans are so proud of this fact. This pride is best seen in the festivals they hold in his honour.

One of the most popular and biggest festivals Sri Lankan’s celebrate is the Festival of the Tooth. Otherwise known as Esala Perahera or the Kandy Festival, it’s held in Kandy during July and August and its timings are based on the lunar calendar. Here we take a closer look at this vibrant celebration. 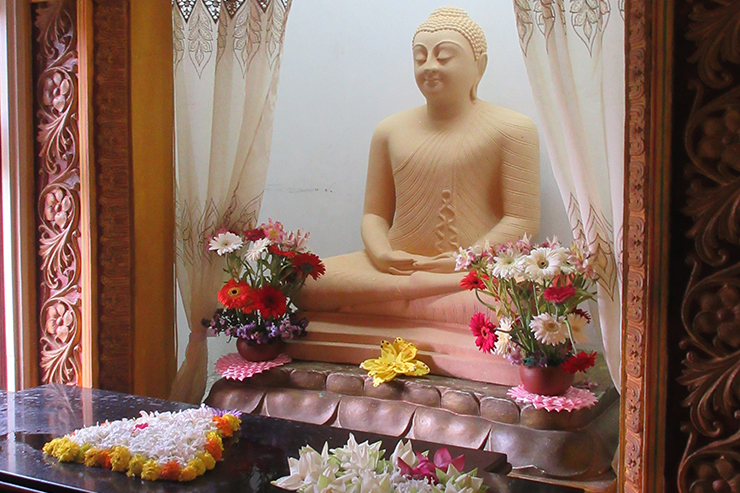 Arriving into Kandy the day before the festival, you can feel the excitement buzzing in the air and can tell the whole city is in the midst of mass celebrations. Everywhere you look there are grandstands being erected where the procession will pass by. No space of road or shopfront is exempt from the official (and not so official) seating being marked off.

The morning of the event, make your way to the Temple of the Tooth early to beat the crowds. This is the perfect opportunity to spend some time walking through the temple’s halls and watching the locals. Admire their devotion to their faith as they pray, place flowers and offer gifts to the many Buddha statues and other sacred icons throughout the complex. If you wish to pay your own respects, there’s plenty of local stalls outside where you can buy flowers cheaply. 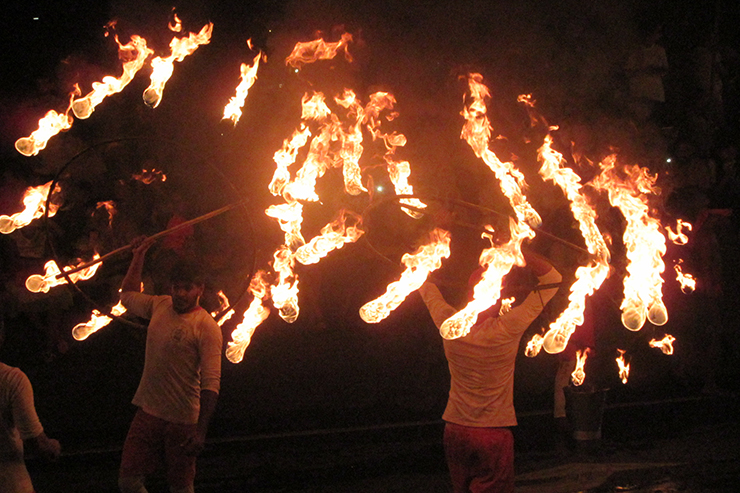 Locals and less prepared tourists will start reserving the best free vantage spots along the procession early in the day. Therefore it’s best to organise private seating ahead of time. That way you can enjoy some rest at your hotel or further explore this fascinating city before the celebrations begin.

The start of the procession is signalled by the blast of a cannon. In the past, processions were held twice a day, however it now only occours in the evening. Whilst you await your first glimpse, you’ll hear the distant noise of drums reverberating down the street and through the surrounding Kandyan hills.

This is soon followed by the clear sights and sounds of whip crackers and fire twirlers announcing what is to come to the spectators. Once they’ve cleared, the festival begins in earnest. As the main event approaches, the next group of people you are greeted by are pole bearers. They carry colourful banners and the Buddhist flag – a symbol of faith and peace found throughout Sri Lanka.

These are then followed by sword carriers. They act to remind everyone that even after the Sacred Tooth Relic was brought to Sri Lanka, it still wasn’t safe and suffered much hardship. 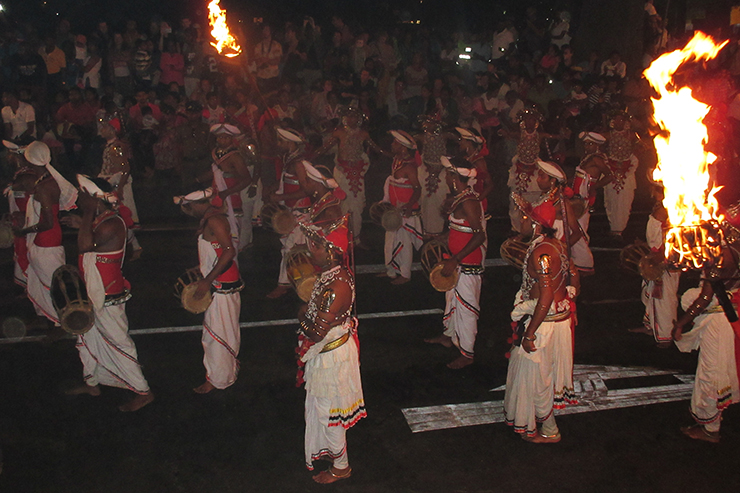 From then on, you’re entertained by different drummer troops playing traditional instruments such as the Thammattama. These are accompanied by musicians playing the traditional Horanawa or ‘temple clarinet’. The groups consist of several generations of drum beaters and trumpet players, whose tunes represent their own tribes and regions.

Scattered in between these groups, you’ll find people performing traditional dance routines. Each dance is said to represent a different aspect of Sri Lankan life and also holds religious significance. For example, the Coconut Flower Dance symbolizes prosperity as coconuts can be found throughout the country.

One of the more popular dances that you will see is the Kandyan dance. It’s believed to have originated from fear of illnesses and natural disasters and is mainly performed to percussion. Other folk dances include the Leekeli stick dance and the Kalagedi pot dance. 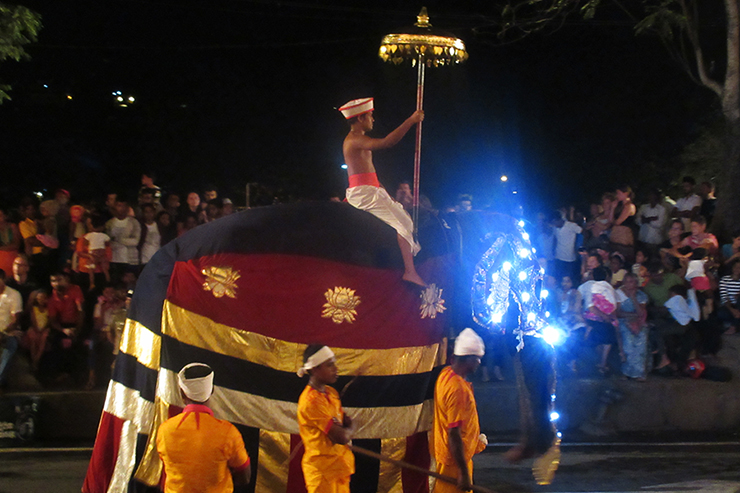 Interspersed with the rest of the drummers is the main reason tourists come to this event. Sri Lankan elephants light the way with their elaborate and colourful garments. Originally decorated with precious stones to glitter and twinkle in the moon and firelight, they’re now lit with LED lights.

There are a number of noticeable colour changes in the procession. To mark each change, an honorary elephant carries a significant relic or person on its back. The night’s activities end after the Maligava elephant carrying the golden casket of the Buddhist Relic passes by. This elephant is flanked by two others who carry attendants that bless this precious burden.

Whilst the Kandy Festival allows you to immerse yourself in Sri Lanka’s culture and rituals, using captive elephants as part of the celebrations is a complex issue. Their participation is a tradition that has passed down through the generations, with it being a matter of great prestige and honour for the elephant owners asked to take part.

However, the welfare of captive elephants has been seriously called into question in recent years. Therefore it’s important for travellers to Kandy to be aware of the issues and make an informed decision about whether they wish to attend.

Want to experience this colourful festival for yourself? Check out our Colombo Caves & Kandy Festival group tour.