When you think of Peru, an image of the Inca citadel of Machu Picchu is most likely the first thing that springs to mind. As the best known archaeological site not only of Peru, but of South America, Machu Picchu draws up to 2,500 people a day in the high season. But for those looking to avoid the crowds, this country has plenty more to offer. Here’s our pick of the lesser-known destinations in Peru. 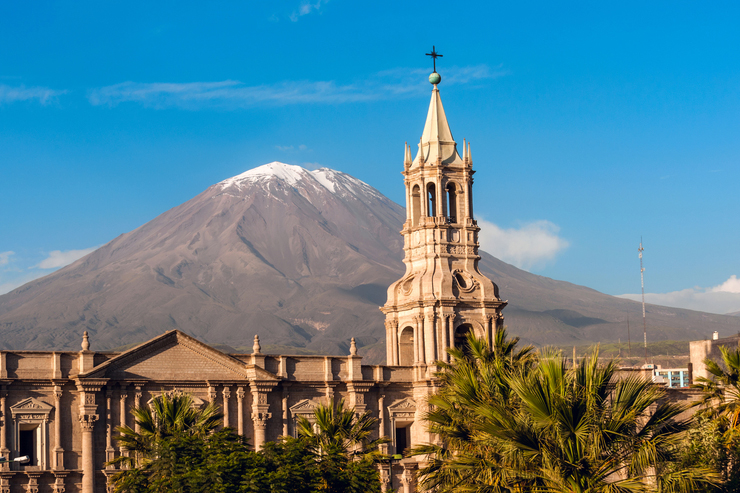 Despite being Peru’s second largest city, Arequipa is often overlooked in favour of visiting Lima or Cuzco. Set on the edge of the Andes, this city is framed by not one but three commanding volcanoes. Offering vistas that are only made more beautiful by Arequipa’s baroque architecture.

Much of Arequipa’s centre is built from a local type of white volcanic stone. This has led to both its nickname as ‘the white city’ and UNESCO World Heritage status. Towering over the Plaza de Armas is the cathedral, one of Arequipa’s most photographed sites and a magnificent house of worship. Alongside its architecture, Arequipa is a fantastic foodie destination with more local dishes than any other Peruvian city. After a few hours here, you’ll struggle to understand why Arequipa is so underrated.

‘For us, Arequipa is without doubt the prettiest of Peru’s cities. Surrounded by volcanoes, its chalky white buildings shimmer in the afternoon sunshine and, in parts, one could be forgiven for thinking that you’ve stumbled onto Spanish streets. However, it’s the distinctly Peruvian influences which abound to provide Arequipa with altogether different charms – the bustle of San Camilo Market, the mysteries of a frozen in time ‘Juanita’, and a still vivid influence of Peru’s indigenous cultures at every turn.’

– Andrew and Emily, Along Dusty Roads 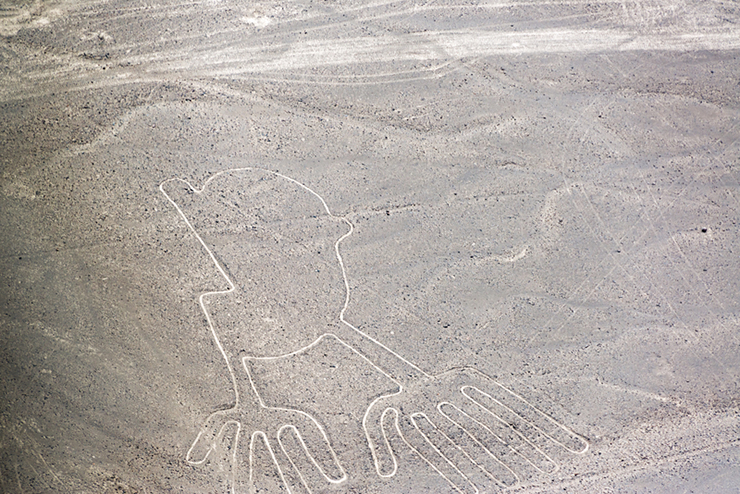 Found close to Nazca on a coastal plain in the south-west of Peru, the Nazca Lines remain one of the country’s great mysteries. The site is composed of giant geoglyphs thought to have been made between AD 450 and 600.

The Nazca Lines feature over 300 geometric figures, 800 straight lines and 70 plant and animal designs – some of which are as large as the Empire State Building. It’s also a designated UNESCO World Heritage Site, with its purpose garnering countless theories since being discovered over 80 years ago. Due to their immense size, the Nazca Lines are best viewed from the air. Although those on a budget may wish to head to the viewing tower instead.

‘We’ve travelled far and wide but never seen anything that exudes as much mystery as the Nazca Lines. Flying over the lines in a helicopter isn’t just an awe-inspiring experience – it is a spiritual one bound to leave travellers mesmerised in ways more than one.’ 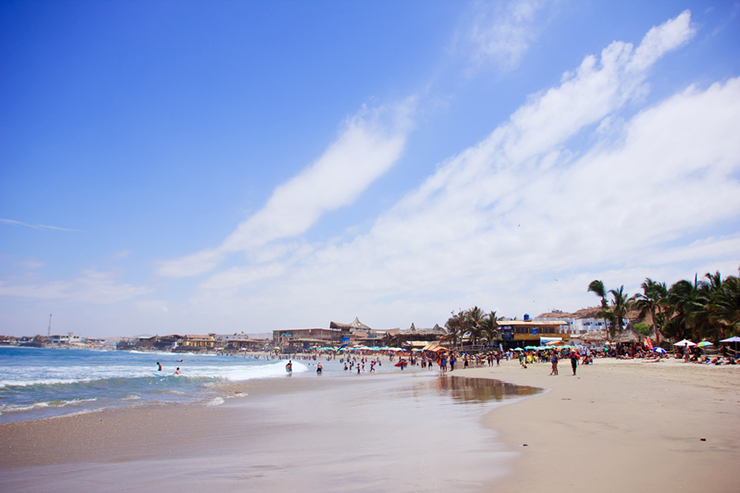 The place to go on Peru’s coast, trendy resort Mancora attracts surfers and jet-setters from neighbouring Brazil and Ecuador. And with its pristine sands, warm turquoise waters and excellent surfing conditions, it’s not hard to see why.

But you don’t need to be a pro to enjoy the waves. There’s plenty of surf schools to help you work on your skills. As well as fishing, snorkelling and scuba diving on offer.

Mancora also boasts year-round sunshine and a range of accommodation options. Throw into the mix delicious fresh seafood, excellent restaurants and wild nightlife, and you’ll soon be making some time for Mancora in your Peruvian itinerary.

Known as the ‘capital of the Peruvian Amazon’, Iquitos is surrounded by rivers and jungle. As the world’s largest city without road access, Iquitos can only be reached by air and water transport. Just 150 years ago, Iquitos was a native village. But after some rapid growth, the city now offers colonial buildings, elegant restaurants and a buzzing nightlife.

Visitors to Iquitos will want to visit the district of Belen. Which offers huge open-air markets and rustic stilt houses along the Itaya River. Other popular activities include an Amazon cruise, visiting the indigenous settlement of Yaguas and staying in a jungle lodge.

Many travellers visit Puerto Maldonado and use this city as a gateway to the Amazon. However, Iquitos appears a more popular destination with adventure travellers looking for a less touristy experience in this magnificent rainforest.

‘For me, Iquitos was the gateway to exploring the Amazon. I started off my trip with a few days in the city where I sampled Amazonian food, visited the water stilt village of Belén, and enjoyed walking along the promenade which is lined with colonial buildings. Then, after a few days in the city, it was time to get a bit closer to nature. First up, an overnight stay in a jungle treehouse where I would wake up to a chorus of birds and chirping critters. That was followed by a river cruise down the Amazon, which included dolphin watching, fishing for piranhas, and kayaking down the smaller waterways. Iquitos was hands down one of my most memorable travel experiences, so if you’re looking for a mix of nature and adventure, I’d definitely recommend adding it to your Peru itinerary!’ 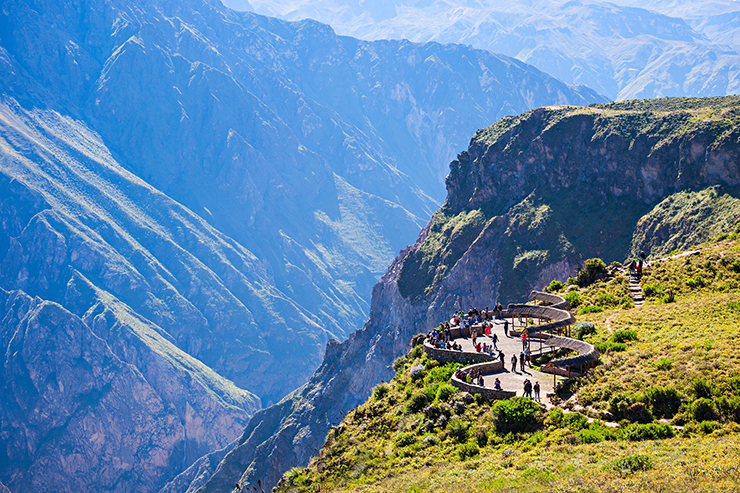 As the world’s second deepest canyon, Colca Canyon reaches depths of approximately 3,400 metres. Stretching for over 100 kilometres through the High Andes, it’s epic in terms of both its size and scenery.

Visitors can take advantage of the endless trekking routes or look out for the resident birds of prey. Alongside kestrels and peregrine falcons, the canyon is famous for its population of Andean Condors. Soaring on the rising thermals, these giant scavengers are one of the largest flying birds on Earth.

Colca Canyon is also home to ancient terraced hillsides, some fields of which still support local agriculture today. Surrounding the canyon you’ll find colourful, traditional villages that are well worth a stop. 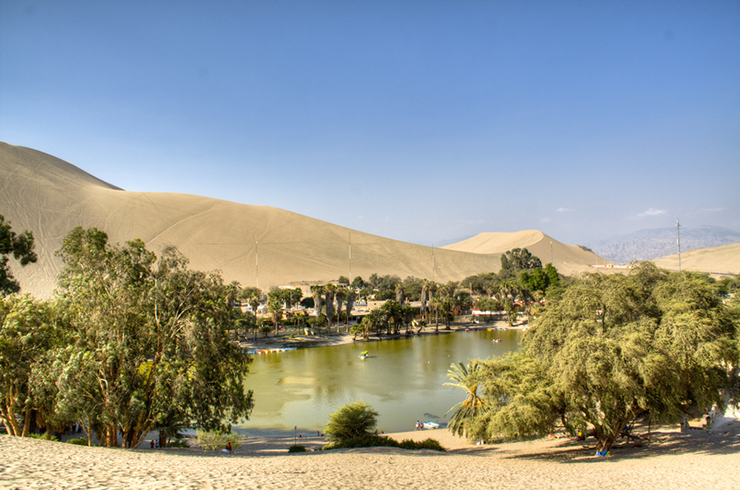 Centred around a lagoon and swaying palm trees, Huacachina is a small oasis in the Ica region. Pre-1960’s, the lagoon’s waters were thought to have healing powers and Huacachina became one of Peru’s most exclusive resorts.

Nowadays, it’s most known for its adrenaline-fueled activities. Dune buggy tours and sandboarding are the most popular thanks to the towering dunes that surround the lagoon. Climb the dunes in the early morning or evening for fantastic views over the desert scenery.

‘Huacachina didn’t make it onto any of the ‘best in Peru’ lists we had seen, but was recommended by a local during our time in Paracas, and ended up being one of the highlights of our time in Peru. Known as ‘Everest of the Desert’, Huacachina is largely known for it’s 300 foot sand dunes, and it was well worth the day trip to fly down them headfirst, at highspeeds, among some of the most spectacular desert scenery!’

‘Many visitors to Peru focus on the Andes and Cusco, but for something a bit different it’s worth adding Huacuacina to your itinerary; suddenly you find yourself in a tiny village beside a small oasis in an enormous sand desert. While the town itself is very chilled out, it’s mainly a base for many adrenaline-raising activities you can do nearby. I loved riding through the desert in buggies at sunset – when I squinted my eyes a little, I could swear I was in the Sahara (or perhaps Tatooine). Some of the dunes are a few hundred feet tall, and if you’re brave enough you can go sandboarding all the way down.’

Thinking of booking your own Peruvian adventure? Take a look at our Peru Group Tours.