On first impressions, Japan appears an incredibly modern, even futuristic, destination. With glimmering skyscrapers and world-class restaurants meeting neon-lit streets and a thriving pop culture. But as you explore, it soon becomes clear that there are plenty of opportunities to experience this country’s traditional side. So for those looking to delve past the flashing lights and new architectural wonders, here are the best places to experience traditional Japan.

Located between the Kamo River and Yasaka Shrine, Gion is the famous Geisha district of Kyoto. Its ancient cobbled streets are lined with shops, restaurants and quaint teahouses. As you stroll around this picturesque area, you may be lucky to spot a Geisha or maiko on the way to their next engagement.

Gion also attracts visitors to its wooden machiya merchant houses. These traditional buildings were built with narrow facades, up to six metres wide, due to the fact that property taxes were previously based on street frontage. However, they extend back from the street for up to 20 metres.

The seaside town of Kamakura is found just an hour from Tokyo. With a history of over 10,000 years, Kamakura reigned as the first feudal capital of Japan between 1185 and 1333. This period also coincided with the spread of Buddhism, which is reflected in Kamakura’s multitude of stunning temples.

One of the most famous is the Zen Temple of Hokokuji. Founded in the 14th century, the temple features a beautiful bamboo garden with over 2,000 dark green stalks. Narrow pathways lead through the bamboo to a quaint teahouse, where you can enjoy a cup of matcha tea and traditional Japanese sweets.

Kamakura is also well-known for its iconic bronze Buddha. Sitting tall at over 13 metres in height, this impressive 95-ton statue has been out in the open for over 500 years.

Onsen is the Japanese word referring to natural hot springs and the bathing facilities built around these thermal areas. Thanks to Japan’s volcanic geology, the country has thousands of hot springs and numerous resort towns have developed around them.

Traditionally, onsen were located outside and swimsuits weren’t allowed. Bathers enjoyed the warm waters with the fresh air on their faces and uninterrupted views of their surroundings.

One of the most popular hot spring resorts is Kusatsu Onsen. Here visitors can observe the traditional method of ‘yumomi’ or water beating. This custom has been passed down since the Edo period and involves using large wooden paddles to cool the water.

Located in an area known as Hida in Japan’s Central Alps region, Takayama is a charming town that dates back to the 16th century. Few other Japanese cities have retained their traditional touch quite like Takayama. And this is most evident in the city’s beautifully preserved Old Quarter.

Many buildings and even whole streets in the Old Quarter date back to the Edo Period from 1600 to 1868. During this time, the city thrived as a wealthy town of merchants, and many of the shops, coffee houses and sake breweries have been in business for centuries.

The city is also famous for the Takayama Festival, which is held in spring and autumn every year. Featuring processions, performances and more, this is considered one of the best festivals in Japan.

Located on the outskirts of Takayama, Hida Folk Village is an open-air museum featuring dozens of traditional houses and buildings. Illustrating the architectural styles of Japan’s mountainous regions, the village allows you to envision what rural life was like in previous centuries.

Within each building are well-presented displays of artefacts and everyday articles. In the arts and crafts centres, you’ll also find demonstrations of traditional crafts such as waving, dyeing and Hida lacquerwork – a form of decorative art.

Located in the neighbourhood of Asakusa, Sensoji is one of the most popular and colourful Buddhist temples in Tokyo. Built in the 7th century, the temple is approached via a 200-metre long shopping street known as Nakamise.

Alongside Japanese souvenirs such as folding fans, you can find various traditional snacks for sale. The street has been serving temple visitors for centuries and several events are held throughout the year in the district. Annual festival Sanja Matsuri is the biggest of them all, drawing over a million visitors to the Sensoji Temple District each May.

For the best taste of traditional Japan, you might not even need to leave your accommodation. Ryokans are traditional inns that welcomed travellers during the Edo period and offer visitors the opportunity to sample authentic Japanese hospitality.

Guestrooms are typically minimalist in appearance, with tatami floors, futon beddings and sliding fusama doors. On arrival, you’ll be greeted by your kimono-wearing host, who will serve tea on the low table in your room. Meals at ryokans are an experience in themselves, with numerous pretty dishes of local cuisine. Natural hot springs are also often attached to ryokans, making them so much more than just a place to sleep.

Tawaraya Ryokan is the oldest in Kyoto and has been in operation for over 300 years. So if you’re looking to spend a night or two in one of these inns – there really is no better choice.

Dating back as early as the 12th century, tea ceremonies are a popular pastime in Japan and can be found across the country. Known as ‘the way of the tea’, the ceremony is a ritualistic way of preparing and serving tea influenced by Zen Buddhism.

Although styles vary, all tea ceremonies follow a general pattern. First, guests are presented with sweets and the tea utensils are brought in. The host then sits down to clean each utensil and warm the serving bowl. Hot water and the tea are then added to the bowl before it’s poured for the guests.

The first tea ceremony was held in Kyoto and this is one of the best places to experience this traditional pastime. Tondaya Tea House is set in an old machiya merchant house on the city’s outskirts, offering its guests the perfect setting for this time-honoured practice.

During the Edo Period, samurai were the highest social caste in Japan and, as a result, allowed to construct some of the country’s most elaborate residences. Although many of Japan’s traditional districts have been lost to redevelopment, natural disasters and wars, some samurai districts have fortunately been preserved and are well-worth a visit.

One of the most famous samurai districts is Kakunodate, located in the Akita Prefecture. This former samurai stronghold was once a castle town and, despite losing its castle, has remained remarkably unchanged since the 17th century.

The district not only contains some of the finest examples of samurai architecture, but hundreds of weeping cherry trees. From late April to early May, the district also draws large crowds to see its pink blossoms and historic homes.

Thanks to its imposing size and beauty, Himeji Castle is considered the most spectacular castle in Japan. Both a World-Heritage Site and national treasure, the complex consists of over 80 buildings connected by a series of winding paths and gates.

Himeji was completed in 1609 and therefore is one of Japan’s 12 original castles. Interestingly, the labyrinth-like approach towards the main keep from Hishi Gate was designed to slow down attackers. The castle is also a highly popular spot for viewing the springtime cherry blossoms.

To give you a better idea of where all these destinations are, take a look at the map below: 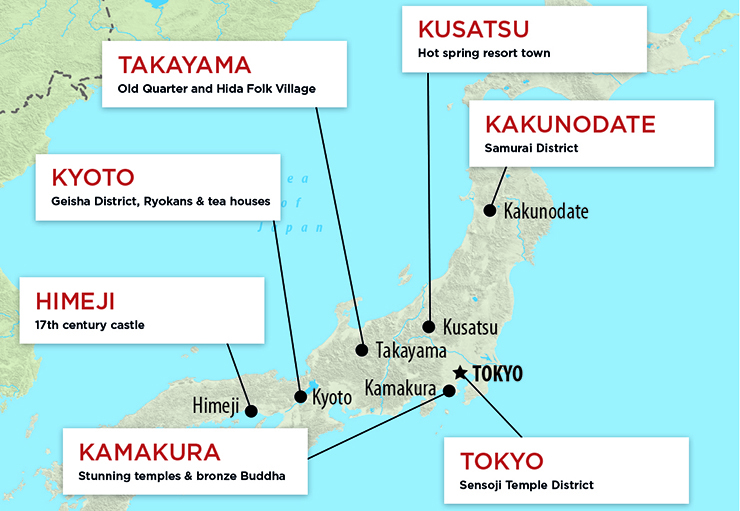 Want to experience Japan’s traditional side? Check out our range of group tours.