Sri Harmandir Sahib, also known as the Golden Temple, is the main attraction in the city of Amritsar. Located in India’s Punjab region, this exquisite temple is one of the most revered and sacred sites in Sikhism. Astonishingly, Amritsar’s Golden Temple draws a similar number of visitors to the Taj Mahal. Pilgrims from across the world come to pay their respects and visitors are drawn to the temple’s beauty, with its golden exterior reflected in the pool of water surrounding it.

Plan your visit with our guide below, offering advice on the best time to go and more useful tips. 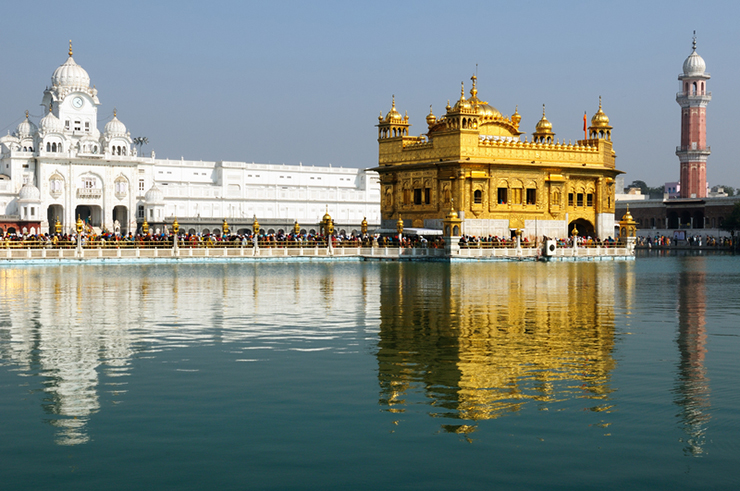 The city of Amritsar was first founded by the fourth Sikh Guru, Guru Ram Das, in 1577. Amritsar means ‘pool of the nectar of immortality’ and was the name given to the man-made pool of water that surrounds the Golden Temple today. The city grew around this pool, with the temple itself designed by the fifth Guru, Guru Arjan. Building work started in 1581 and the temple took eight years to complete.

In 1762, the temple was severely damaged by Afghan invader Ahmed Shah Abdali as part of an ongoing battle between Sikhs and Muslims. Thankfully, it was quickly rebuilt. However, the temple didn’t get its famous gold glow until 1830 when Maharaja Ranjit Singh, the leader of the Sikh Empire at that time, funded the gold plating.

After the temple was first completed, Guru Arjan installed the Adi Granth inside. This is the holy scripture of Sikhism and is regarded by Sikhs as the eternal living guru, which is why the temple is so sacred to their religion. Amritsar’s Golden Temple is a ‘gurdwara’ in Punjabi, which means ‘door to the guru’. As well as being the central place of worship for Sikhs, people of all faiths and nationalities are welcome. 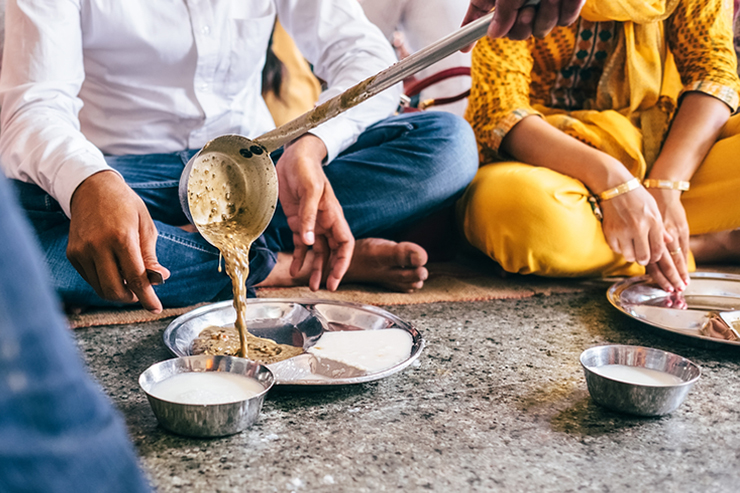 Free food for everyone

One of the main features of a ‘gurdwara’ is its langar hall, where people can eat free vegetarian food. And the Golden Temple is known for having one of the largest free community kitchens in the world.

On arrival, everyone gets a metal tray, cutlery, and cup by a volunteer and sit on mats in either of the temple’s two food halls. Lentil dahl, rotis (Indian flatbread), yogurts, and chai are served here by hundreds of volunteers who prepare the food around the clock.

On an average day, around 200,000 rotis and 1.5 tonnes of dahl are served to over 100,000 people. The food never runs out and no one ever goes hungry, no matter what their caste, nationality or religion.

CHECK OUT OUR ‘AMRITSAR & THE GOLDEN TRIANGLE’ TOUR 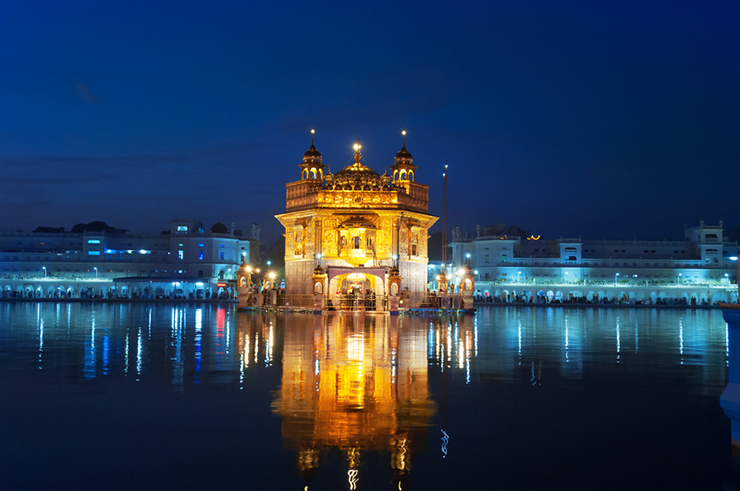 Amritsar experiences hot summers and cold winters. Therefore, the shoulder months of October to November and February to March are considered the best times to visit. The temple’s open 24-hours a day and you’ll need to cover your head and take your shoes off to enter.

We recommend visiting twice to make the most of this beautiful site. Alongside visiting during the day for a meal, make sure to come by after sunset. At night the temple’s pure gold dome is illuminated and its reflection glitters on the waters below.

Special rituals are performed at dawn when the Adi Granth is taken out and in the evening when it is ‘put to bed’. Starting at the land end of the promenade, four men carry the book on an embroidered pillow back to the temple whilst chanting and saying prayers. Time your visit with this nightly ritual to gain a deeper understanding of the temple’s role in local people’s lives.

SPEND 4 DAYS IN AMRITSAR ON THIS PRIVATE TOUR 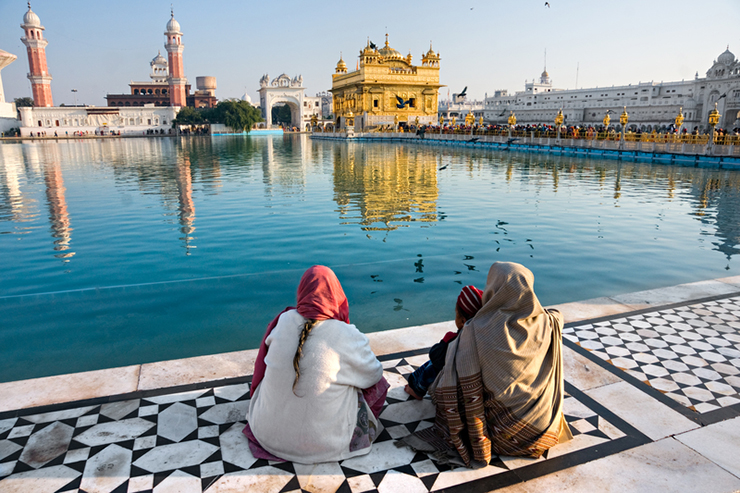 From April 1st 2018, Amritsar’s Golden Temple took a step to become plastic-free. Rather than using plastic bags to carry devotional offerings and food, the temple introduced compostable bags instead. To help support this environmentally-friendly movement, here are some sustainable travel tips to bear in mind for your visit:

Whilst there are direct flights to Amritsar from various cities in India, taking the train is one surefire way to reduce your carbon footprint. You’ll find services from most major Indian cities, with the journey from Dehli taking six hours.

It’s possible to volunteer in the Golden Temple’s kitchen. You can help wash the dishes or cook the meals to serve the thousands of pilgrims that come to the temple each day. You could dedicate a few hours, a day or even longer if you wish. The staff will show you what to do and it’s a great way not only to give back, but to meet the local people.

According to Conde Nast Traveller, the food is said to be Amritsar’s biggest attraction after the Golden Temple. The city has lent its name to dishes such as Amritsari kulcha, a flatbread stuffed with potato or cottage cheese. Sample Punjabi delicacies from street food stands and local restaurants. You’ll not only enjoy a range of delicious new flavours, but be supporting the local economy and reducing the need for imported food.