Katy Grantham, our HR and Operations Exec, spent a year living in beautiful St Petersburg. Here she reveals why it’s her favourite city and gives you a few convincing reasons to visit St Petersburg too… 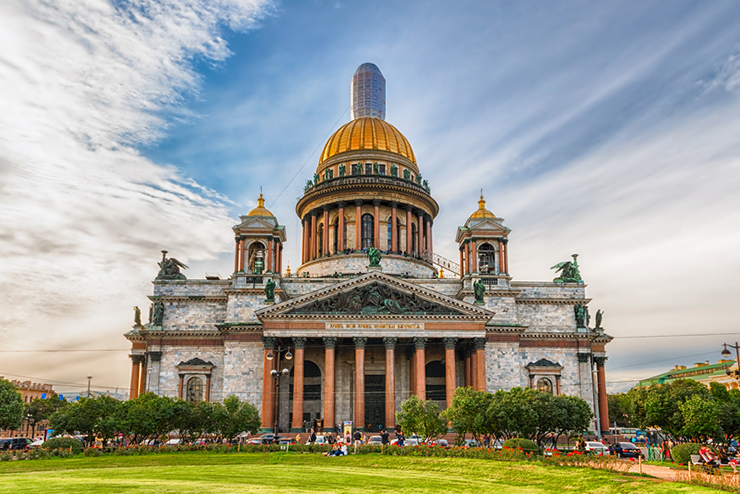 A famous saying among Russians is that Moscow is for working and St Petersburg is for falling in love. While I may not have found the love of my life during my time there, my heart was certainly won over by the breath-taking beauty and passionate soul of this vibrant city. So if you’re considering visiting, these reasons might just persuade you to book that trip.

A trip to St Petersburg isn’t complete without visiting its crowning glory – the Winter Palace. Now housing one of the world’s largest art collections as the Hermitage Museum, the palace was the official residence of the legendary Romanov family until the revolution in 1917. Witnessing the palace under fresh St Petersburg snow is to step back in time and glimpse the extraordinary wealth and extravagance that the imperial family enjoyed.

If you aren’t done feeling like royalty yet, there are six other major palaces and 50 more imperial residences in and around the city. Peterhoff Palace, which was modelled to outshine Versailles, is by far the most extravagant of these. I highly recommend getting the hydrofoil from outside the Winter Palace across the Baltic Sea and arriving like an emperor returning from battle. 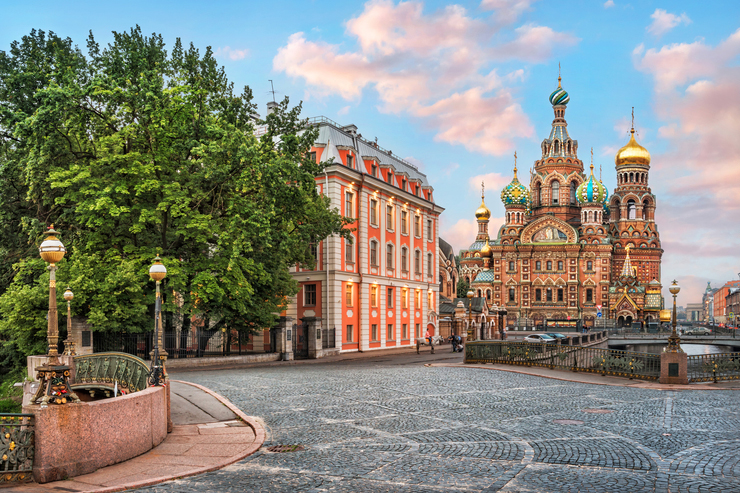 If you’re in search of something a little more off the beaten track, the concrete megastructures on Vasilevskii Island are soviet palaces unto themselves. Although not everyone’s cup of tea aesthetically, they’re a fascinating insight into the Kommunalki (communal apartments) of recent Russian history. 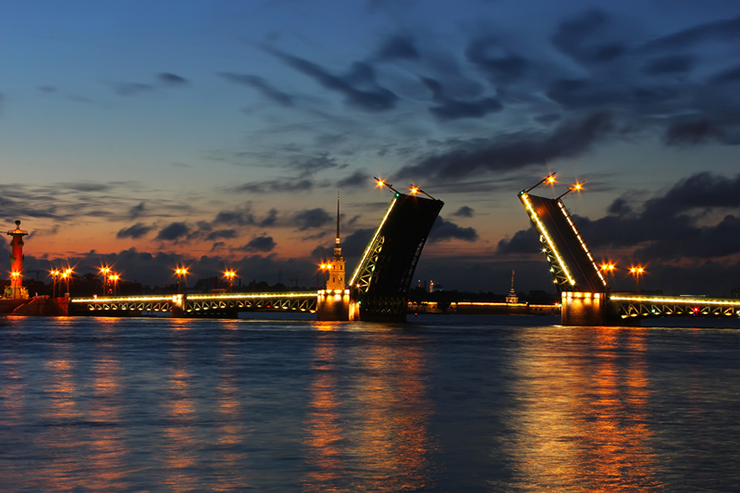 3. The rising of the bridges

Unless you’re a passionate pontist, it may not occur to you to spend your holiday looking at bridges. But the rising of the bridges over the moonlit River Neva is a sight not to be missed.

During the summer months, when the ice is thin enough for the cargo ships to break through, thousands of people line up each night to watch the bridges opening up in succession. If you don’t feel like pushing and shoving in the crowds, there’s a flotilla of tour boats every night that follow the bridges as they open.

The opening season usually begins in April and ends in November, but can change depending on the depth of the ice. While the event is all the more spectacular when there’s snow on the ground, do remember to take a good coat as it can get very chilly on the river at night.

The downside to the bridges opening is that if, like I was, you are staying on one of the islands, there’s no way back until the bridges close again or the metro opens at 6am. Fortunately, however, St Petersburg is a city that you have to see at night. Although unusual for a cold climate, many unlikely businesses stay open 24 hours and there’s a thriving city centre that’s very safe at night.

If you’ve already had your fill of Vodka and Konyak and don’t feel like another night of heavy drinking, how about something a little more wholesome? Most ice rinks in the city are open to the public 24 hours all year around. Alternatively, why not go flower shopping in one of the hundreds of flower shops across the city that are open all night long.

Visit during the white nights and you can experience the ‘Night of the Museums’ when most of the major museums stay open to the public all night. Get ready to queue though, because the event is very popular! There are, of course, also a plethora of bars to go to…

READ MORE: OUR GUIDE TO THE WHITE NIGHTS FESTIVAL 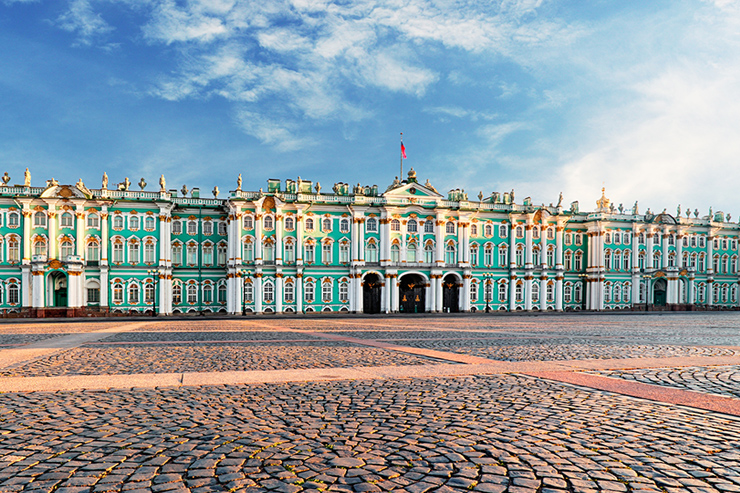 Russians are an incredibly proud people, and there’s nothing that they’re more proud of than their significant contributions to the world of art and literature. The Hermitage alone houses over 3 million pieces ranging from classical masters like Shishkov and Rublev to modern masterpieces by the likes of Kandinsky or Malyevich.

Besides the classics, however, St Petersburg is full of hidden cultural gems. Check out Pushkinskaya 10 for a fascinating insight into the underground soviet art world. The building was originally used as a communal squat for free-thinking artists who wanted to rebel against soviet censorship.

Most of the apartments are now open to the public as the Museum of Non-Conformism. You can see permanent collections from historical residents or temporary exhibitions from the artists in residence still living there today. 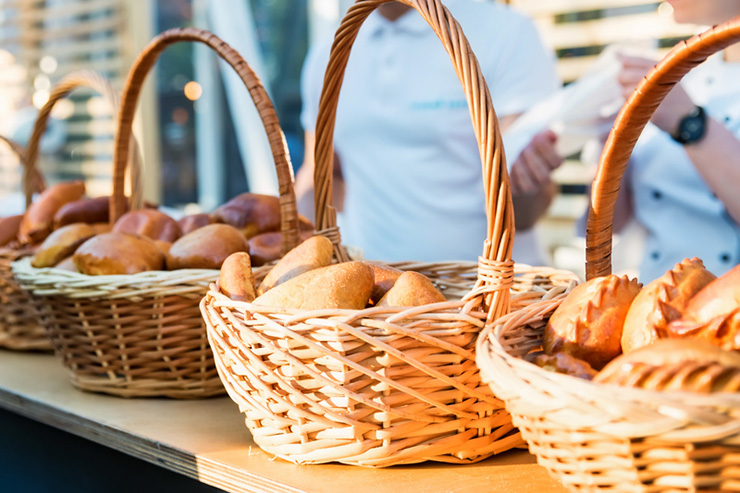 Any world-renowned French pâtissier has nothing on the lifetime of knowledge and care that a Russian babushka puts into her pirozhki. Heavily doused in cream and butter, these aren’t for anyone watching their weight. But a visit to Russia isn’t complete without sampling the local bakeries.

If you find the Russian world for hello (zdravstvuitye) too much of a mouthful, how about taking a mouthful of the following:

Pirozhki – Russian word for a small pie, can be sweet or savoury, but my favourites are the poppyseed (mak) or raspberry (malina) flavoured ones.

Sirniki – Pancakes made with sweet cottage cheese, great with smetana and honey.

Ponchiki – tiny Russian donuts. The ponchiki on Pushinskaya Street are so famous (and delicious) that they usually have a queue around the street waiting for them.

If you plan to visit during the spring, make sure you check out when the Russian Orthodox Maslinitsa Festival is. Russians take their pancakes very seriously and rather than the pancake day that westerners celebrate, they take a whole week to gorge!

RELATED: A FOODIE’S GUIDE TO RUSSIA 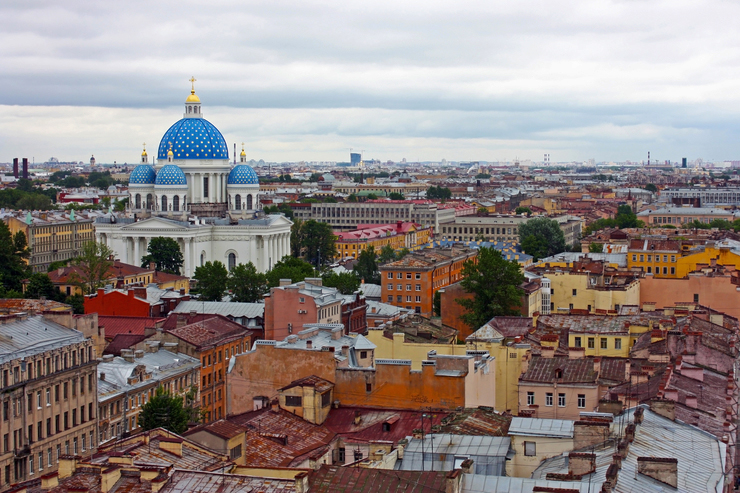 There’s a reason why Andrei Beli wrote with such fondness of the rooftops of the city in his novel St Petersburg. There’s really no better view of the intertwining buildings and canals than from above. But without a local connection, it can be difficult to know how to access any of the rooftops.

The Loft Project (Etazhe in Russian) on Ligovsky Prospekt offers access to its roof for a few rubles and is even decked out with fake AstroTurf and a small bar. On a sunny day, you’ll find the entire young population of St Petersburg up here, and you can get incredible views of the city at any time of year. Just be careful when it’s icy as ‘health and safety’ is not a phrase that exists in Russian.

If you’re in the mood for something a little more upmarket, Gastronomika restaurant, just off Nevsky Prospekt, offers both breathtaking views and stunning art deco interiors. 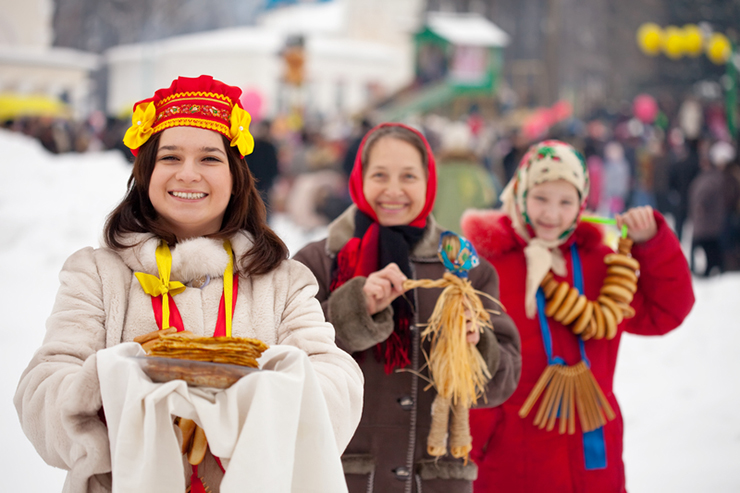 Russians get a bad rep for being rude in the rest of the world, but this couldn’t be further from the truth. Yes, admittedly, they are a very direct people and some don’t believe that it’s necessary to smile without reason (do this and they will think you’re an idiot).

But, once you’ve befriended a Russian, you’ll find they’re a very warm, hospitable people. Try opening yourself up to the local culture and you might just find yourself with an invite onto someone’s roof…