Estonia. Latvia. Lithuania. I bet you can’t point them out on a map? The three former Soviet satellite states often pass under the radar for travellers to Europe. But there is no good reason for this. Rich histories, stunning architecture and welcoming locals make the Baltics an ideal destination for the adventurous traveller. Here are 10 interesting facts about the Baltics.

Not so eastern after all

#1 Lithuania is the geographical centre of Europe
The Baltics are often referred to as being part of Eastern Europe. Not according to the French National Geographic Institute, which says that the geographical centre of Europe is actually in Lithuania. 26 kilometres north of Vilnius, in a small village called Purnuskes, to be precise. An Instagram snap at the monument which marks the site is surely worth a visit on its own.

#2 Riga is home to more than a third of Latvians
Latvians love their capital. In fact, nearly 700,000 of the 1.9 million inhabitants of the country live there. And it’s easy to see why. Known as the ‘Paris of the North’, Riga boasts wonderful architecture and a great location, on the shore of the Gulf of Riga. It was also the European Capital of Culture in 2014.

#3 Forests cover more than half of Estonia
Many countries exploit their environment and their forests, chopping them down for timber. Estonia recognizes the importance of forests and as a result, more than 50% of the land area in the country is forested. And this is increasing.

#4 Latvia has the oldest flag in the world
This is a bit of a contentious one, and I’m sorry if I’ve offended anyone from Denmark or Austria, which also claim this title. The story goes that in 1279, the city of Cesis in Latvia was under siege by enemy tribes. An arrow hit the Latvian chief, killing him. Enraged, his supporters took off their white shirts and bathed them in the blood of the chief, using them as battle flags to charge the invaders. And so, the red and white striped flag of Latvia was born.

#5 Lithuania has a creepy Hill of Crosses
After a bloody battle in 1831, crosses and crucifixes were left on a hill near the Lithuanian city of Siauliai. The site became a popular pilgrimage location for Catholics and there are now more than 100,000 crosses at the site, as well as statues of the Virgin Mary and other Lithuanian patriots. All of our Lithuania tours visit this fascinating attraction.

#6 The Baltics are ridiculously flat
At 318 metres tall, Suur Munamagi (which translates into ‘Big Egg Mountain’) would barely be considered a hill in most countries. But in Estonia, it’s the highest peak in the country. In fact, it’s the highest peak to be found anywhere in the Baltic states. Maybe stick to the Alps for skiing then…

#7 Latvia used to have colonies in Africa and the Caribbean
For such a small country, this is something of a surprise. But tiny Kunta Kinteh Island in the Gambia and the 25-mile long island of Tobago in the Caribbean were both once colonies of the Baltic state.

#8 Estonia is home to bears, wolves and lynxes
The exponential growth of humanity in Europe means that most countries on the continent have lost their top predators. The wilds of Estonia are like stepping back in time, with the small human population and great number of forests meaning that bears, wolves and lynxes have been able to thrive alongside people for centuries. Beavers, wild boar, and elk are also found in good numbers throughout the country.

#9 Latvia has a beer spa
No trip to Riga would be complete without a visit to the city’s famous Beer Spa. Visitors can enjoy a warm beer bath whilst sipping on a refreshing drink. And this isn’t just a novelty – Eastern Europeans have been doing this for decades, claiming that a beer bath relieves stress, cleanses the skin, and releases toxins from the body. Where do I sign up…

I can think of other ways to have fun

#10 In Lithuania you can experience life as a Soviet prisoner
Located 25 kilometres from Vilnius, the ‘1984: Survival Experience’ is set inside a former Soviet bunker. Guests are subjected to a 3-hour experience of what life was like for Lithuanian prisoners under the USSR. The experience is as authentic as it gets, complete with German shepherd dogs and real former KGB (Soviet Secret Service) officers. Expect to be interrogated, wear a gas mask and eat some unappetizing gruel, before being rewarded with a shot of vodka. I think I’ll stick with the Beer Spa.

The Baltic countries make the perfect holiday destination, with a great mixture of culture, history, and nature. If you’re planning a European getaway for 2021, then look no further than our Baltics group tours. For more information, or to answer any questions you have, please get in touch with our expert team. 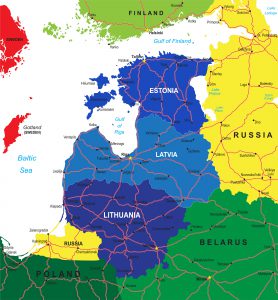